The first U.S. ultra supercritical power plant became operational at the end of 2012 at the Southwestern Electric Power Company John W. Turk facility.[i] Proposed rules by the Environmental Protection Agency (EPA) have put any plans to build more of these highly efficient and clean facilities on hold, despite the innovations this type of plant provides. This ultra supercritical coal plant generates electricity more efficiently at higher temperatures, requires less coal and produces fewer emissions to generate the same amount of power as other coal units. EPA has two proposed rules—one dealing with new plants and the other with existing plants—that would result in no new coal plants being built in the United States because they cannot meet the proposed specifications.

What is an Ultra Super Critical Plant?

Southwestern Electric Power Company, an operating unit of American Electric Power, began commercial operation of its 600-megawatt John W. Turk, Jr. Power Plant on about 3,000 acres near Fulton, Arkansas on December 20, 2012. It cost $1.8 billion to build. The Turk coal-fired plant burns 180,000 fewer tons of coal and produces 320,000 fewer tons of carbon dioxide each year, making it 15 percent more efficient than any other coal plant in the United States.  The plant uses low-sulfur coal from the Powder River Basin in Wyoming.

Southwestern Electric Power Company began construction of the Turk plant in November 2008, providing up to 2,200 construction jobs at peak employment in May 2011 and 109 permanent positions with an estimated annual payroll of $9 million. The plant provides $6 million in annual school and county property tax revenues in Southwest Arkansas. Besides serving Arkansas’ wholesale customers, the plant provides power to retail and wholesale customers in Louisiana and Texas, as well as Oklahoma’s Municipal Power Authority. The plant is a base-load facility designed to meet demand for power that is available 24 hours a day, 7 days a week.[iii]

On September 20, 2013, the Environmental Protection Agency issued a proposal for carbon dioxide reductions from new coal- and natural gas-fired power plants. The proposed rule, the “Standards of Performance for Greenhouse Gas emissions From New Stationary Sources: Electric Utility Generating Units,” sets emission limits at 1,100 pounds per megawatt hour for coal-fired plants and 1,000 pounds per megawatt hour for large natural gas-fired turbines. Smaller natural gas-fired turbines producing approximately 100 megawatts of electricity or less would be allowed 1,100 pounds per megawatt hour.[iv] Natural gas units can meet the proposed rule; but coal-fired units cannot without adding carbon, capture, and sequestration technology that is not commercially available. Thus, if this rule goes into effect, no new coal fired units would be built.

On June 2, 2014, EPA released its regulation mandating carbon dioxide emission standards for existing power plants. This proposed rule requires the electric generating sector to reduce carbon dioxide emissions by 30 percent below 2005 levels by 2030. To do this, EPA proposed specific emissions goals for each state. For example, Arkansas’ target is a 44.5 percent reduction—much higher than the national average of 30 percent. EPA identified four “building blocks” that states can use to meet their targeted reductions: heat rate improvements; using less carbon intensive electric generating units; using more low- or zero-carbon generation; and using demand-side energy efficiency. States must submit their implementation plans to meet the proposed rule by June 2016 or apply for an extension. 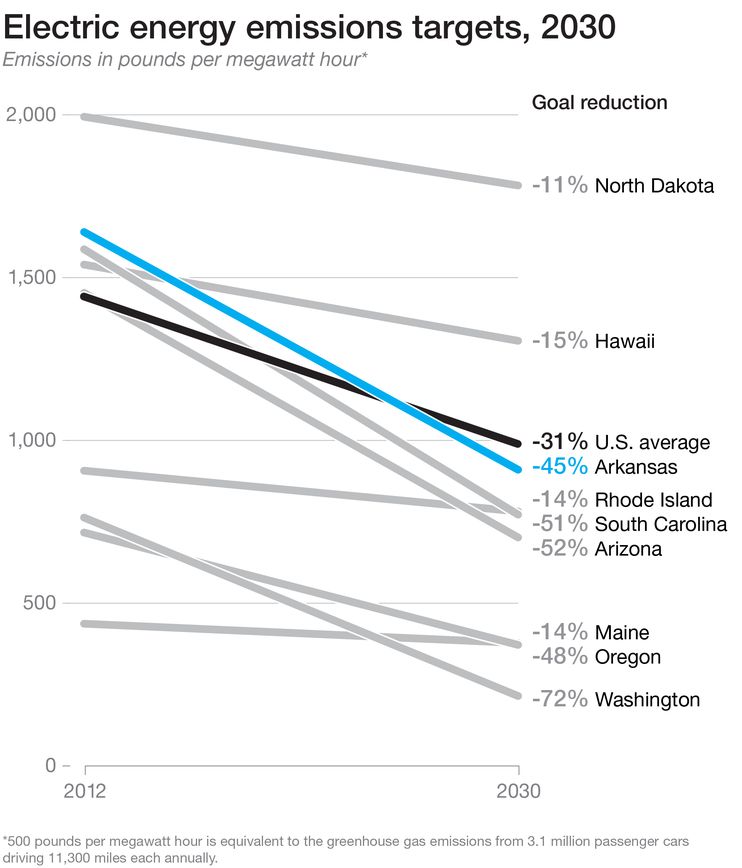 Earlier this year, EPA indicated that it would issue final carbon reduction rules for new and existing power plants by mid-summer.

Arkansas gets more than half its electricity from coal—so a 44.5 percent reduction target is pretty formidable.  To achieve the proposed emissions reductions, Arkansas would likely need to construct natural gas power plants replacing power coming from five coal-fired plants around the state. According to the Energy Information Administration, Arkansas currently has the 4th lowest residential electricity price in the nation. But, one utility company estimated that prices for its customers would go up by at least $20 a month (20 percent) because natural gas is more expensive than existing coal and constructing new natural gas plants is about double the cost of operating existing coal-fired plants.[1] Arkansas will also need significant investment in pipelines and storage if it goes the natural gas route.[v] 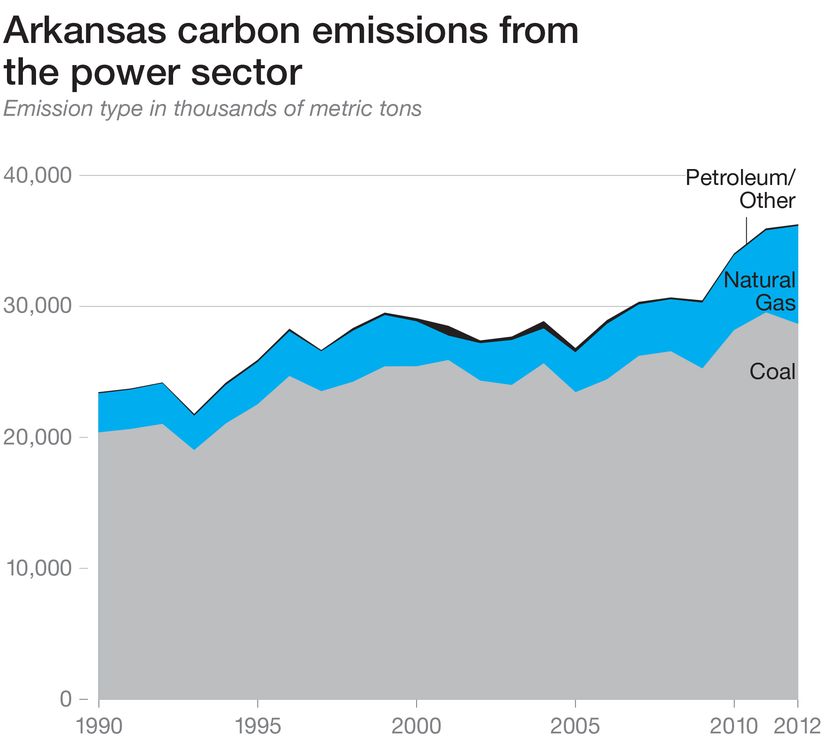 While states technically have until 2030 to achieve their carbon reduction targets, the EPA provided interim goals that begin in 2020. Between 2020 and 2029, Arkansas will need to obtain an average reduction of 41 percent. To put this in perspective, imagine what EPA would say and how it would function if it were required by Congress to cut its budget by 41 percent between 2020 and 2029.

China Is the World’s Leader in Ultra Supercritical Coal Plants

On July 23, 2010, the Chinese National Energy Administration announced the establishment of a “National Innovation Union of 700°C Ultra-supercritical Coal-fired Power Generation Technology,” launching China’s ultra supercritical technology development plan. This plan is focused on research related to the optimal design of unit systems and major equipment as well as the development of the necessary thermally resistant alloys. China plans to begin construction of the 700°C steam temperature demonstration project in 2018 with a completion date expected in 2020.

Because Arkansas gets most of its electricity from coal, it is able to attract companies and create jobs with some of the lowest electricity rates in the country.  But these low rates will not continue if EPA’s proposed rules go into effect. The new EPA rules would block the development of advanced coal power plants such as the Turk plant. These rules are designed to comply with the president’s plan to make electricity rates “necessarily skyrocket”[vii] by reducing the use of coal-fired electricity generation from new and existing power plants—one of the cheapest sources of electricity generation.  The EPA proposed rules would reduce clean, affordable and reliable energy that U.S. consumers are dependent on and the jobs and regional economies that need this critical electricity source.

“Divestment Day” Hurts Investors, Does Nothing for Climate