The D.C. Circuit ruled this past Friday that the EPA issued biofuel mandates with the explicit goal of helping its favored biofuel industry.  In so doing, EPA violated the Clean Air Act’s requirement that the agency make its mandates in an objective, scientific manner.

In 2007, Congress created a renewable fuel standard (RFS) program mandating a certain level of production for biofuels to be used as transportation fuel.  The EPA was tasked with establishing the year-to-year level of production mandated.  To make sure the EPA did not set outrageous mandates for renewable fuel, Congress required that the EPA predict, based on Energy Information Administration estimates, how much biofuel would be required.

Earlier this month, we noted that the EPA had utterly failed to match its predictions to actual production over the past three years.  Here’s the graph we made from government data on biofuel production: 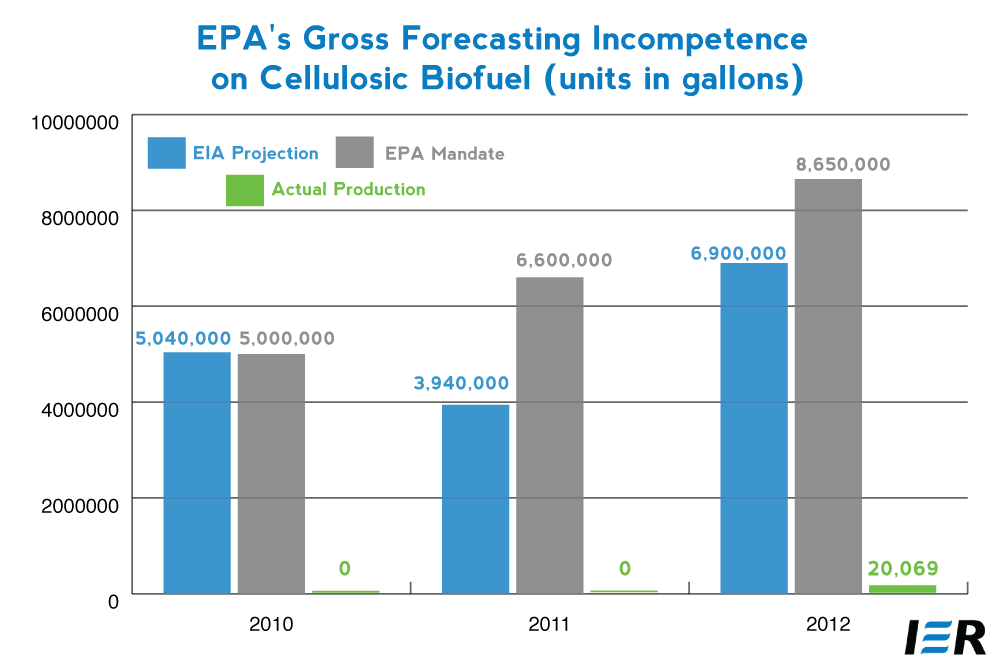 It turns out that the EPA forecasting incompetence resulted from bias in its predictions process.  In responding to comments on its forecasts, EPA stated that its “intention is to balance [] uncertainty with the objective of promoting growth in the industry.”  The EPA went on to say that setting the biofuel mandate at a high level would “provide the appropriate economic conditions for the cellulosic biofuel industry to grow.”  It is estimated that EPA levied nearly $7 million in fines on U.S. refiners for failing to use non-existent biofuel in 2011.

In the words of the D.C. Circuit, EPA’s actions were a case of “let[ting] its aspirations for a self-fulfilling prophecy divert it from a neutral methodology.”  The result was that fuel companies were hurt by the inevitable failure of biofuel producers to meet impossible projections.  The Court noted that the EPA essentially said, “Do a good job, cellulosic fuel producers.  If you fail, we’ll fine your customers.”

The D.C. Circuit did a good job of policing EPA excess in this case, but only the most diehard optimist would expect that the EPA will refrain from playing favorites again in the future.  The only way to permanently deprive the EPA of the power to choose winners and losers is to take away its power to mandate levels of renewable fuel production.