The Environmental Protection Agency (EPA) has the legal authority to modify the Renewable Fuel Standard mandate levels if the legislated requirements are not attainable. When Congress passed the levels of renewable fuels in the Energy Independence and Security Act of 2007, it was expected that gasoline demand would continue to increase, so they mandated an increasing level of renewable fuels to match the increased levels of motor fuel demand expected. However, gasoline demand has actually fallen during recent years, making the levels Congress mandated non-attainable and unnecessary.

Last November, the Environmental Protection Agency (EPA) mandated 18.11 billion gallons of renewable fuels (corn-based ethanol and other biofuels) to be blended in 2016. This is 7 percent higher than in 2015 and over 10 percent of this year’s expected gasoline production. In other words, 18 billion gallons of ethanol is over the 10 percent blend wall.[i] The problem with exceeding the blend wall or even just reaching it is that many automobile manufacturers will not warranty vehicles that use more than 10 percent ethanol and many small engines (e.g. lawn mowers) also limit ethanol mixtures and actually prefer pure gasoline. For that reason, it has been recommended that the renewable fuel share not exceed 9.7 percent.[ii] But, EPA ignored that recommendation in setting the renewable fuels share for 2016, which is at 10.1 percent.

This month, the EPA proposed that 18.8 billion gallons should be blended with motor fuels in 2017— 3.8 percent higher than the 2016 level. Here again, the level exceeds the blend wall, with an expected share of 10.44 percent.

At the same time, 18.8 billion gallons is less than the volume mandated by the RFS. EPA explained that the lower-than-mandated level is needed because of slower-than-expected development of certain types of non-corn biofuels and constraints in the market place. EPA is expected to issue the final rule later this year after the close of a public comment period.[iii] 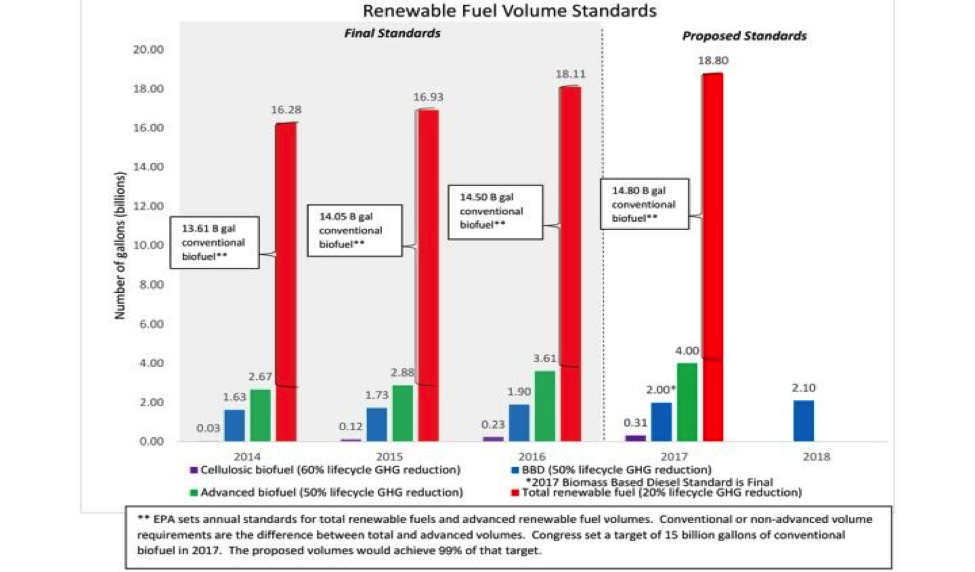 Costs Increase When Levels are Not Met

With oil prices being down, ethanol is now trading for prices that are higher than gasoline. Consequently, refiners either have to pay the premium for ethanol or purchase RINs—either way they are paying a penalty for a government program that was supposed to help, instead of hinder, the gasoline market.

The legislation sets mandated levels of biofuels through 2022 when Congress envisioned 36 billion gallons of renewable fuels being consumed, of which 15 billion gallons was to be corn-based while the rest was to be advanced biofuels. The 21 billion gallons of advanced biofuels is unlikely to be produced since the cellulosic ethanol industry did not take off as Congress envisioned. After 2022, Congress indicated that EPA should set targets at its discretion. Unforeseen problems with the Renewable Fuel Standard—the blend wall and the lack of cellulosic ethanol production, which was expected to reduce emissions at a greater level than corn-based ethanol—have made many critics call for its total or partial repeal.

According to the Energy Information Administration (EIA), over 95 percent of all fuel pumped into American vehicles in 2015 contained 10 percent ethanol. With EPA’s higher mandated levels, the next step must be a greater amount of a higher ethanol blend. With almost all U.S. gasoline now being sold as E10, the only way to increase ethanol use in the motor vehicle fleet is to adopt fuel blends containing a higher volume of ethanol, such as E15 and E85. E85 can only be used in flex fuel vehicles. EPA believes that E15 can be used in vehicles of model year 2001 and later models despite many automobile manufacturers disputing that finding and not warrantying cars that use E15.[v]

In the final RFS rules issued in November 2015, the EPA estimated 320 million gallons of E15 and 200 million gallons of E85 would be used in 2016. These values together represent just 0.4 percent of the 142 billion gallons of fuel expected to be consumed by vehicles and other equipment with gasoline-burning engines in 2016, according to EIA’s Short-Term Energy Outlook.[vi]

It is not clear why flex fuel vehicle owners would use E85 over E10, even if it were available to them, since on a Btu equivalent basis, it is more expensive. Average E10 prices in the United States are $2.28 a gallon and average E85 prices are $1.84 per gallon. But, adjusted for its lower energy content, E85 costs the consumer $2.58 per gallon.

Congress and the Bush Administration in 2007 made estimates of what they expected the future to look like with respect to gasoline consumption and biofuel production, and set numbers into law. They were wrong about both futures. The EPA’s mandate for renewable fuels blended into transportation fuels in 2016 and its proposal for 2017 forces more ethanol into the market than the current infrastructure can handle, which increases fuel costs for Americans. Rather than exceed the blend wall, biofuel volumes should be capped to match current market realities and lessen the impact of the renewable fuel standard on consumers.

News Flash: Wind Power is Not Cheaper than Coal