Cellulosic ethanol is ethanol made out of biomass such as wood chips, corn cobs, or so-called energy crops such as switch grass and poplar. Cellulosic ethanol from wood was first produced in Germany in 1898. The Germans developed an industrial process that was also used in two commercial plants in the southeast United States during World War I.  The plants closed shortly after World War I due to a drop in lumber production. During World War II, the United States again turned to cellulosic ethanol, but because the technology was still not profitable, the plant closed after the war. Construction of pilot scale cellulosic ethanol plants requires considerable financial support through government grants and subsidies.[i]

When Congress created the cellulosic ethanol mandate, they assigned EPA the task of determining a new mandate each year, if cellulosic producers do not produce the mandated level. Although the agency provides a much lower mandate than what Congress hoped for, EPA’s mandate is far higher than the amount available from pilot plants and higher than the amount suggested by the Energy Information Administration (EIA). The penalties for not blending the prescribed EPA amount are eventually paid by consumers at the pump. 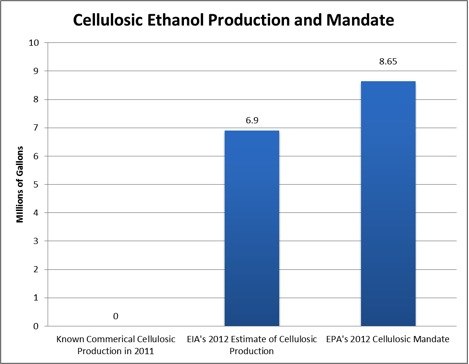 The State of Cellulosic Ethanol Producers

A 2011 report by the National Academy of Sciences (NAS) concluded that “currently, no commercially viable bio-refineries exist for converting cellulosic biomass to fuel.” The reason, according to the NAS, is because of “the high cost of producing cellulosic biofuels compared with petroleum-based fuels, and uncertainties in future biofuel markets.” According to NAS, even the 2022 target will not be met “unless innovative technologies are developed that unexpectedly improve the cellulosic biofuels production process.” The report also concludes that the renewable fuel standard “may be an ineffective policy for reducing global greenhouse gas emissions,” since the full life cycle of the fuel, including its transport, could result in higher emissions than conventional petroleum.[v]

The federal government under Presidents Bush and Obama has poured at least $1.5 billion of grants and loan subsidies to potential cellulosic producers. Recently, in August 2011, the Obama Administration funded a $510 million program in partnership with the Navy to produce advanced biofuels for the military. In September 2011, the federal government loaned $134 million to Abengoa Bioenergy to build a cellulosic plant in Kansas and the Department of Energy provided POET, which advertises itself as the “world’s largest ethanol producer,” a $105 million loan guarantee for cellulosic biofuels.[vi]

Refiners have to purchase waiver credits for failing to comply with the mandate to purchase cellulosic biofuel that does not exist commercially. For 2011, the cost is estimated at $6.8 million, but the amount will not be determined until refiners close their books in February. According to Charles Drevna, president of the National Petrochemical and Refiners Association, the credits cost about $1.20 per gallon.[vii] These costs are passed onto consumers of gasoline and diesel fuel, so the renewable fuels mandate becomes an invisible tax paid at the gas pump. It is just another way for the federal government to tax consumers, and in this case without most of them suspecting it.

Congress subsidized a product (cellulosic biofuel) and mandates its use although that product does not exist and is punishing oil companies for not purchasing the nonexistent product. And the federal government is still subsidizing the industry in the hope that someday it might exist. All along, consumers and taxpayers are paying for the debacle whether at the pump and/or in subsidies and loan guarantees.

As Charles Drevna stated, “Once again, refiners are being ordered to use a substance that is not being produced in commercial quantities—cellulosic ethanol—and are being required to pay millions of dollars for failing to use this nonexistent substance. This makes no sense.”

[ii] New York Times, A fine for not using a biofuel that doesn’t exist, January 9, 2012, http://www.nytimes.com/2012/01/10/business/energy-environment/companies-face-fines-for-not-using-unavailable-biofuel.html?nl=todaysheadlines&emc=tha25