The Energy Policy Act of 2005 requires the Environmental Protection Agency (EPA) to set mandatory levels of cellulosic biofuel for refiners to blend into transportation fuels.  In order to restrain EPA, the law requires that the mandate be based on an estimate from the Energy Information Administration (EIA) as to how much cellulosic biofuel would be produced in the given year.

In 2010 and 2011, EPA mandated refiners to blend millions of gallons of cellulosic biofuel.  However, in both years, no cellulosic biofuel was produced.  Refiners were nevertheless forced to pay millions in penalties to EPA for failing to purchase the nonexistent fuel.

EPA set the cellulosic biofuel mandate for 2012 at 8.65 million gallons.  Unfortunately, by year’s end, only 20,000 gallons had actually been produced.  In January, the DC Circuit Court of Appeals struck down the 2012 mandate because the agency’s estimate was based, in part, on the admitted “objective of promoting growth in the [biofuel] industry” instead of a neutral analysis of projected production.

Less than one week after the 2012 mandate was thrown out, EPA issued an even higher mandate for 2013 – 14 million gallons.  Despite its wildly inaccurate track record and the intervention of the DC Circuit, EPA seems unwilling to change its ways.

IER was the only free market public policy group to submit comments to EPA demanding that the agency reconsider this costly mandate.  Our full comment can be found here and is also reposted below:

I. Industry Statements Have Proven Untrustworthy For EPA’s Predictions

In the Proposed Rule, EPA states that its projection of cellulosic biofuel production in 2013 is based both on EIA’s estimate and “individual projections that emerged from” meetings with senior level representatives of companies involved in the process.[1]  While the biofuel industry may have confidence in its ability to produce 14 million gallons ethanol-equivalent of cellulosic biofuel, the actual results in 2010, 2011, and 2012 show that the industry’s statements have little or nothing to do with reality.

The two companies that EPA believes will produce cellulosic biofuel in 2013 – KiOR and INEOS Bio – have a history of making incorrect projections about their abilities to produce fuel.

The project is on schedule and on budget so far, and if things continue to go as planned, the plant will be mechanically complete in April and will be continuously churning out waste-based ethanol by the second half of next year [2012].[2]

The facilities were not completed by April.  INEOS Bio did not issue a news release on the project until July 23rd, stating:

Construction of Ineos’ $130 million biorefinery joint venture project in the US has been completed, with production expected to begin in the second half of 2012, said Peter Williams, CEO of Ineos Bio, the Switzerland-based company’s bioenergy business.[3]

INEOS Bio did not produce any cellulosic ethanol in the second half of 2012.  In a subsequent news release on August 9, 2012, the company stated:

The Center is scheduled to begin production in the 3rd Quarter of this year.[4]

Construction on the Center was completed in June 2012, and production of advanced cellulosic bioethanol is scheduled to begin in the 4th Quarter.[5]

…we remain on target to meet our goal of first production in the second half of the year [2012].[6]

On a November 8, 2012 Earnings Call, Mr. Cannon announced that KiOR had “started production at the Columbus facility in October.”  He also stated

we are confident we will start commercial shipments from Columbus later this month.[8]

Just last week, KiOR announced the first shipment of cellulosic biofuel from its Columbus facilities.  However, KiOR did not announce the quantity of the shipment in its news release or earnings call.

The statements of KiOR and INEOS Bio, as well as other companies in the cellulosic biofuel industry, have influenced EPA’s prior projections of production.  As the chart below shows, reliance on these types of statements has led to wildly inaccurate projections: 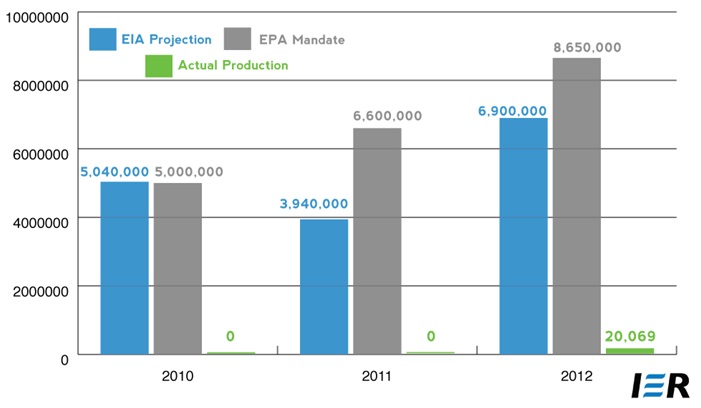 In fact, the closest EPA has ever come to successfully projecting the actual volume of cellulosic biofuel was in 2010 because that was EPA’s smallest projection.

Recommendation: IER recommends that EPA place very little weight on statements from the cellulosic biofuel industry, at least until the industry demonstrates that their statements are based on real-world data. Instead, EPA should incorporate previous year production levels as a basis for realistic projections.

II. The First-of-a-Kind Technologies Being Used Are Not Yet Proven At Commercial Scale

If these facilities are unable to prove their proprietary process for commercial production, then they will produce far less cellulosic biofuel than their nameplate capacity.

The INEOS Bio facility was completed in June 2012 and began the start-up phase in November 2012.  Four months after start-up, the company still has not made a public announcement of any RIN generation at the facility or any commercial shipments of cellulosic biofuel.

Similarly, the KiOR facility was structurally completed in September 2012.  Despite the company’s statements that it would be shipping cellulosic biofuel by the end of 2012, KiOR just made its first announcement of shipped cellulosic biofuel.  However, the company has not revealed the quantity that was shipped and no RIN information is yet available.

EPA’s projection that both INEOS Bio and KiOR will be producing cellulosic biofuel at their respective facilities’ nameplate capacity by the end of 2013 is enormously aspirational, given that neither company has shown that their first-of-a-kind technology is capable of such a feat.  Until these companies show that their facilities are capable of producing at nameplate capacity, EPA seems to be relying solely on these companies’ advertising, not their proven capability.  As seen in Section I of this comment, these two companies have a history of being unable to produce fuel in accordance with their own public statements.

Recommendation: In order to allow time for the companies to prove their proprietary technologies, we recommend projecting that KiOR and INEOS Bio will not produce cellulosic ethanol in 2013 in commercial quantities.  Until these companies prove their technologies, EPA is making a risky assumption that they will work as planned.

III. KiOR Has Made A Lower Projection Than EPA

EPA projects that in 2013 KiOR will produce 8 million ethanol-equivalent gallons of cellulosic biofuel, “which is about 5 million gallons of actual pure hydrocarbon fuel.”[10]  However, on its most recent earnings call on March 18, 2013, KiOR President and CEO Fred Cannon stated that “we believe our volume expectations to be approximately 3 to 5 million gallons for the balance of the year.”[11]

This revelation should inform EPA that its estimates are at the very highest end of the estimates made by KiOR itself, which has a history of public statements of overly-ambitious production levels.

Recommendation: In order to “[reflect] EPA’s best estimate of what will actually happen in 2013,”[12] EPA should revise downward KiOR’s projected production for 2013.

EIA has apparently reduced its projection of cellulosic biofuel production that will occur in 2013 to approximately 5 million gallons.  Because EIA’s decreased production estimate comes four months after the initial projection to EPA, EIA must be taking into consideration more recent information.

EPA’s method of analysis has resulted in extremely inaccurate predictions for the past two years.  The Proposed Rule for 2013 mandates an amount of cellulosic biofuel that, once again, surely will not exist by the end of the year.

SIMMONS: How Taxpayer Money Gets Lost in the Wind