With the emergence of the “Green New Deal” as the climate catastrophists’ policy du jour, the carbon tax has receded into the shadows. Green New Dealers seem wholly unconcerned with “pay-fors” and generally do not consider a carbon tax to be a central element, if it is an element at all, of their far-reaching platform. But as you’ll see below, the carbon tax has not faded from discussion entirely.

In this newsletter we document two papers, one from our friends at the Fraser Institute and another from an unlikely source on a seemingly unrelated subject, along with one of the calls to wed the Green New Deal with a carbon tax.

In its current form, Alberta’s Climate Leadership Plan will reduce the province’s economic growth at a far higher cost than necessary to achieve a very modest impact on global climate change. As such, the best option is arguably to eliminate carbon pricing at the provincial level altogether. However, especially in the context of a federal “backstop” carbon price, at the very least the Alberta government should revise its approach to carbon pricing to eliminate the most economically destructive elements of the CLP. Specifically, any carbon tax should be truly revenue-neutral (that is, with no additional spending on programs, even if designated as “green”), with the receipts ideally used to reduce the marginal rates on other taxes. Furthermore, a carbon price ostensibly corrects for any “market failure” in business and household decisions, and therefore it should not be supplemented with additional targets for emissions or renewable energy.

The study released this month by Canada’s Fraser Institute reviews the theoretical and empirical evidence of carbon taxes’ impact on economic performance with an eye toward informing policy development in the province of Alberta. Economist Robert Murphy demonstrates that even on its own terms, Alberta’s plan for carbon compliance is economically ill-conceived.

Social-network algorithms gather people into likeminded groups and promote to them the content that will generate the strongest reaction. Attach a revenue-generating engine to these two elements, and you’ve created an efficient machine for spreading misinformation and hate. Free Press believes a sound approach to addressing this dangerous system is an old one: taxes. In this case, a tax would be levied against targeted advertising to fund the kinds of diverse, local, independent and noncommercial journalism that’s gone missing, and to support new news-distribution models, especially those that don’t rely on data harvesting for revenue. Think of it like a carbon tax, which many countries impose on the oil industry to help clean up pollution. The United States should impose a similar mechanism on targeted advertising to counteract how the platforms amplify content that’s polluting our civic discourse.

Rarely does my “carbon tax” Google Alert yield something of significance that would not have crossed my desk otherwise, but this manifesto published by a paradoxically-named nonprofit group, Free Press, qualifies. In attempting to justify an authoritarian speech restriction, the authors inadvertently communicate the fundamental motivator behind calls to tax our use of energy: antipathy to liberty and an impulse toward controlling others. Thank you, Free Press, for helping us to see it.

On the revenue side, I believe passing a carbon tax is one of the best ways to [fund a Green New Deal]. A $20 tax per metric ton of carbon that climbs over time at a pace slightly higher than inflation would raise around $96 billion in revenue each year – covering just under half the estimated cost. At the same time, it would reduce carbon emissions by 11.1 billion metric tons through 2030.

In other words, not only does it help raise money to pay for a transition to a green economy, a carbon tax also helps spur that very change.

Accepting for a moment that a revenue discussion is necessary, the $96 billion in annual receipts would be a mere pittance in comparison to the monumental funding demands of the all-encompassing platform. This op-ed contributor, Edward Barbier, floats an annual cost of just under $200 billion, but according to former CBO director Douglas Holtz-Eakin’s American Action Forum, the pricetag would run into the tens of trillions each year.

For the American Action Forum’s full report on the costs of a Green New Deal, follow this link.

The month of February, in a nutshell. 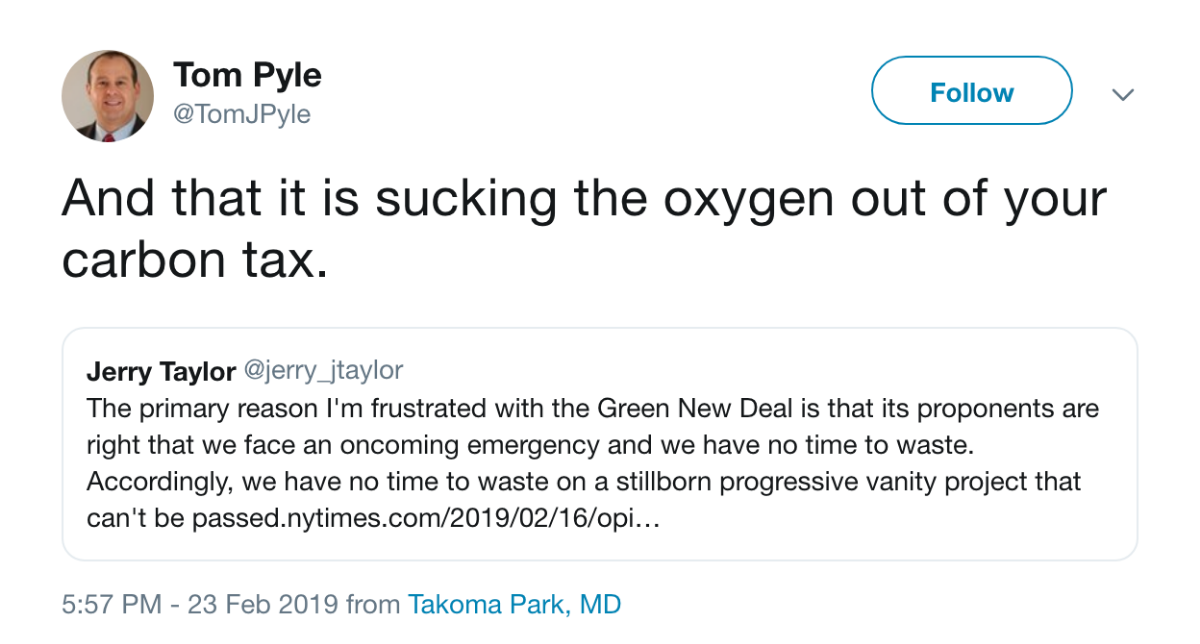 Plugged In Podcast #17: Jason Hayes and Isaac Orr discuss reliable energy and the polar vortex in the Midwest