In the old Soviet Union, the Communists allegedly used[i] the term “useful idiot” to describe Westerners whose naïve political views furthered the Soviet agenda, even though these Westerners didn’t realize that they were being exploited in such fashion. It is in this context that I confidently declare that American economists have been useful idiots for the green socialists pushing extreme climate change policies. The radical environmentalists were quite happy to embrace the economic concepts of “Pigovian negative externalities” and a carbon tax in the past, but now that it is impossible for economic science to endorse their desired agenda, the activists have discarded the entire field as hopelessly out of touch. Economists who still support a carbon tax and other climate “mitigation policies” should be aware of the bigger picture.

I have been making this case for years. For example, back in 2014 I used the latest (and still most recent) UN Intergovernmental Panel on Climate Change (IPCC) report to show that the then-popular climate change target of 2 degrees Celsius of warming could not be justified by the research summarized in the report. In other words, I used the UN’s own report to show that the popular climate change “cures” would be worse than the disease.

Yet even though they had spent years berating the critics of government action as “climate deniers” who rejected the “consensus science,” in this case—once they realized that the economic models of climate change wouldn’t support aggressive intervention—the environmental activists all of a sudden began pointing out all the things that the UN-endorsed studies left out. Rather than summarizing the cutting edge knowledge on climate science and mitigation policies, the IPCC document turned into a bunch of misleading nonsense that would give ammunition to deniers.

Last fall, we had another demonstration of the chasm between the actual research and the media/political treatment: William Nordhaus won the Nobel Prize for his pioneering work on climate change, on the same weekend that the UN released a “special report” advising governments on how to try to limit global warming to as little as 1.5 degrees Celsius.

There was just one little problem: Nordhaus’ Nobel-winning work clearly showed that the UN’s goal was insane. According to his model, it would literally be better for governments around the world to do nothing about climate change, rather than enact policies limiting warming to 1.5°C. Rather than aiming for a 1.5°C target, Nordhaus’ most recent model runs indicated that the “optimal” amount of warming to allow was closer to 3.5°C. (To an outsider this might not seem like a huge discrepancy, but it is absolutely gigantic in the context of the climate change policy debate. Many activists would confidently predict that even 2.5°C of warming would spell disaster for our grandchildren.)

Ah, but I got the best confirmation of my quixotic position just last week, when the Guardian ran an editorial with this subtitle (my highlighting): 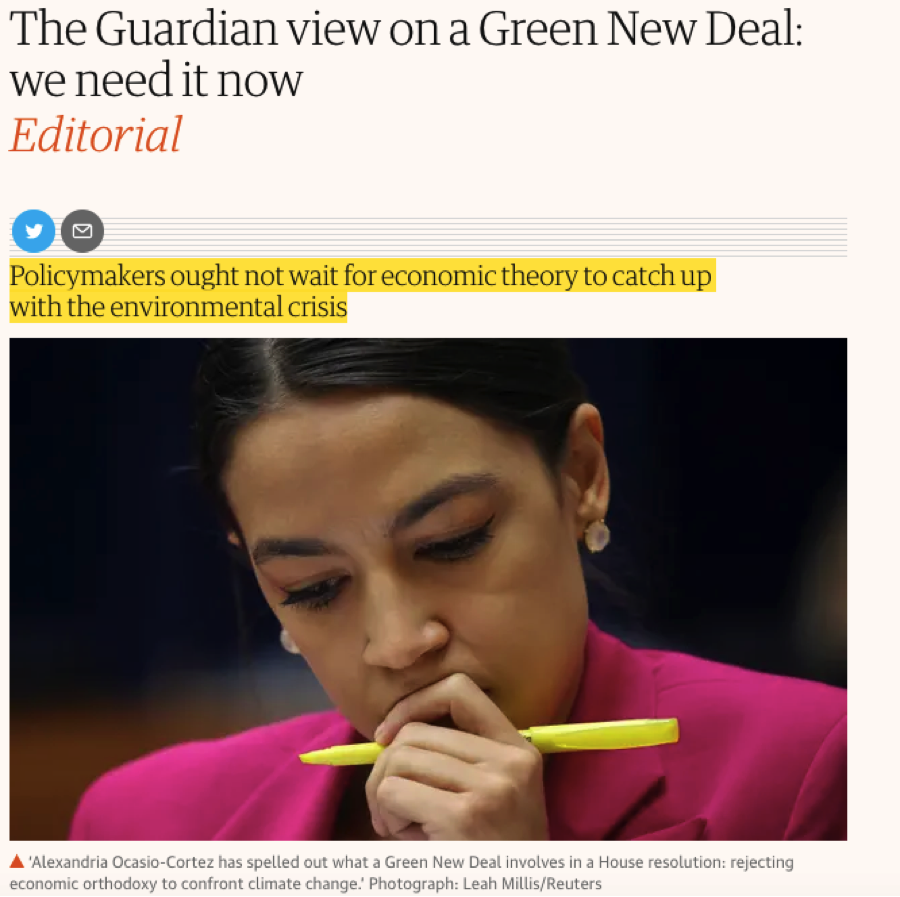 Does everybody see that? The people at the Guardian already know what the policy answers are, without needing any help from the economists.

My economist colleagues who continue to urge for a “carbon tax swap deal” in order to get rid of “onerous top-down regulations” and enact a simple “price on carbon” are fooling themselves. Whether it’s in a ballot initiative in Washington State—literally designed by an environmental economist, or in the wonky columns of Vox’s climate expert, in the political calculus of Nobel laureate Paul Krugman, or in the FAQ on the Green New Deal itself, the environmental activists in US politics are making it quite clear that they will not settle for such half-measures.

Market-friendly economists chiming in on the American political scene should stop being useful idiots for the green socialists. Whatever the possible merits of a theoretical carbon tax package—in which a regressive hike in energy prices is matched dollar-for-dollar with corporate income tax cuts, and decades of special-interest favoring regulations are thrown out the window in the zeal for efficiency—this is all a moot point. If market-friendly economists succeed in getting their readers to hold their noses and support a carbon tax, they will all learn quite quickly that the deal has been altered.

[i] The use of the term “useful idiots” has been attributed to Lenin, but apparently that link is disputed.