Environmental, Social, and Governance (ESG) investing is all the rage among those who are frustrated that democracy and freedom are not making others do what the ragers want them to do.  It is also popular among some firms who repeat the chants and don the mantle of ESG in hopes that the ragers won’t try to cancel them.  However, these hardcore ESG advocates want to mandate their version of ESG, dictate which firms can get bank loans, who, in addition to stockholders, directs the firm’s actions, and how the firms’ leadership is constructed.  Not surprisingly, politicians — whose currency standard is power —  want in on the market. This could be bad for economic growth and bad for your retirement account.

Some proponents claim that ESG investing is more profitable, and mandates will be good for stockholders.  The logic, here, is feeble and the evidence is fleeting, at best.  There is plenty of pressure from stockholders (and potential stockholders) to discipline firm behavior towards maximizing returns.  In any event, recent evidence indicates firms unhobbled by ESG constraints do better than the firms adopting ESG practices.

In a Wall Street Journal op-ed, last September, Terrence R. Keeley, a former executive at investment powerhouse and ESG advocate, BlackRock, noted that since 2017 ESG funds have had an average annual return of 6.3% compared to 8.9% for the broader market.

If this difference in rates of return is broadly symptomatic of the costs of ESG constraints, imposing market-wide ESG requirements could cost the median worker more than a million dollars in their retirement portfolio.

A typical recommendation is that workers put at least 15% of their annual, before-tax, income into their retirement fund.  Taking 15% of median income for each year and compounding these savings at the 8.9% earned by the broader market and comparing it to the same savings compounded at the ESG return of 6.3% shows that ESG investing would cut the retirement total in half. 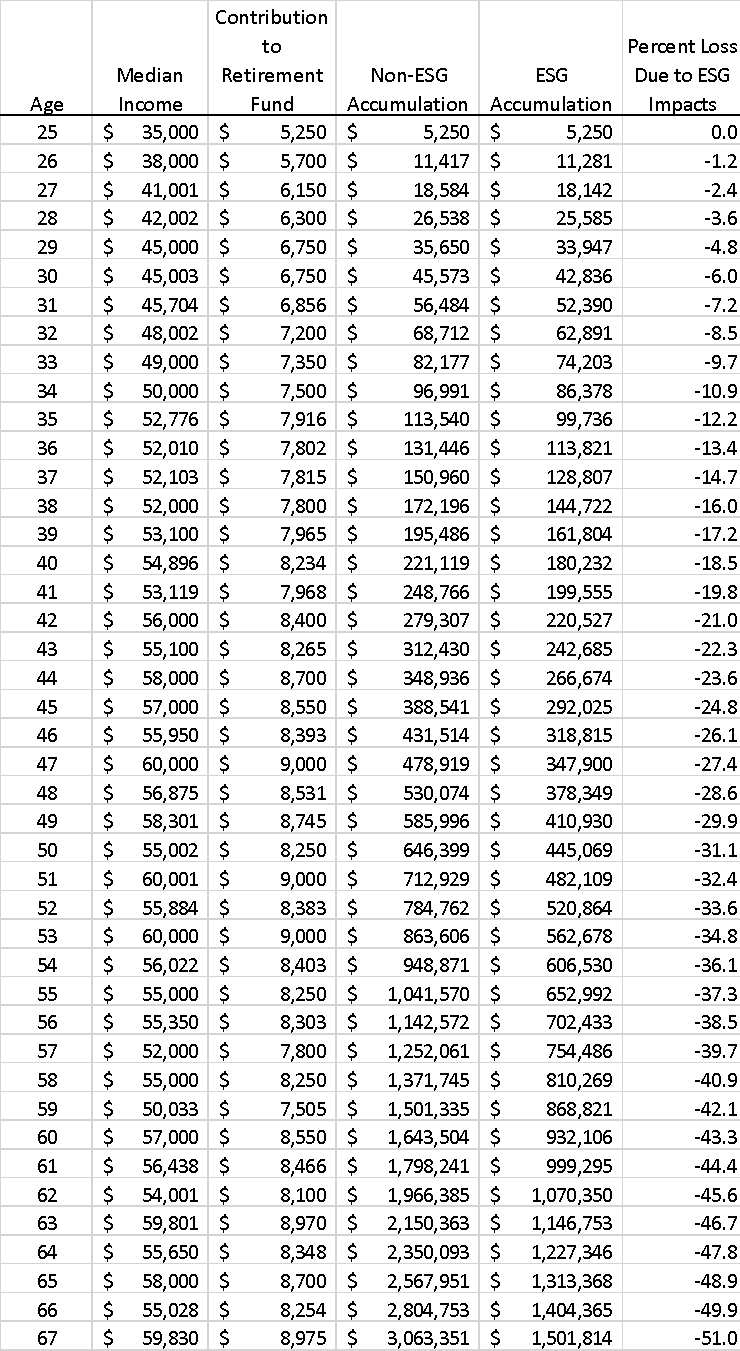 Like the Black Lives Matter movement, the ESG proponents use words that make anyone who doesn’t agree sound like a sociopathic Neanderthal.  Of course, black lives matter, but the BLM movement’s leaders are Marxists who want to uproot basic American institutions (like the police) and get rid of capitalism.  The uncontroversial proposition that people’s lives matter and that slavery and segregation were abominations is used as a cover for radical policies few would support.

ESG advocates say they want investment “to make the world a better place,” and to be “socially responsible” and “sustainable.”  Who wouldn’t want a better world?  ESG goes beyond simple-minded nostrums to mandates that are a gut punch to our economy and ultimately, the quality of life for Americans.

A prominent ESG take is that the conventional energy which powers the world is bad because it isn’t “sustainable.”  Though a fundamentally vacuous concept, sustainability seems to mean only doing things that you can do the exact same way forever.  Since there are only finite amounts of chert and flint, this logic would limit humanity to a pre-Stone Age lifestyle.  Don’t worry though, the self-appointed arbiters of sustainability can make exceptions—usually for themselves.  For instance, there were 400 private jets in the fleet that carried the participants to the recent COP26 UN climate meetings in the luxury resort seaside town of Sharm el-Sheikh, Egypt.  Cutting down trees to expand farmland in Brazil is not sustainable.  Cutting down trees in the southeastern U.S. to burn in British power plants is sustainable.  Mining metals is not sustainable, except for lithium, cobalt and nickel mining for use in EVs and wind turbines.

Most of the E in ESG really focuses on “C,” which is climate.  The climate activists would have you believe fighting climate change through eliminating carbon-dioxide emissions is imperative because we are already in the midst of existentially threatening, catastrophic climate change. Their evidence is every hurricane, flood, drought, tornado, and forest fire.  Included too are snowstorms, when convenient. IPCC and US government data, on the other hand, show no upward trends in these extremes.  Though a 0.01 C increase in temperature per year and an annual three-millimeter increase in sea level is generally acknowledged, the lack of worrisome trends in extreme weather events has been a consistent feature of the science chapters in the IPCC reports, once one gets beyond the “summary for policymakers,” the dumbed- down,hyped-up PR messaging document made for shallow politicians and even shallower journalists.   This scientifically documented lack of trends is just as consistently ignored in the politically vetted introductions to the reports. This lack of trends has been noted by many conservative commentators, including IER reports here and here, but is overwhelmingly ignored by most mainstream media.  It’s too much work and it doesn’t fit the narrative.

Advocates for ESG mandates offer this tradeoff: Arbitrary (and self-enhancing, for them) rules to address a non-problem in exchange for half your retirement account on top of lower economic growth.  That doesn’t seem like it would make the world a better place.

China Gets Into the LNG Tanker Business