The term “green job” has been invented to describe the type of workforce needed to build a new government-funded national “alternative” energy infrastructure. Proponents of “green jobs” say that by spending taxpayer money on energy sources like wind and solar, the government can create millions of new jobs in the process. But according to the biggest proponents, such a program would cost taxpayers somewhere between $30,000 and $100,000 per new job.

During the campaign, President-elect Obama said he would like to dedicate $15 billion in taxpayer funds to create “green jobs.” Spending billions to create jobs sounds appealing, but Obama and other proponents of such a program have thus far failed to mention the downsides this will have on the productivity of the overall economy.

One of the great things about a market economy is that politicians and government planners don’t have to do anything for economic activity to take place. Bureaucrats don’t need to invent non-government related jobs and subsidize them with taxpayer funds. They don’t need to determine in which regions the jobs should be created and which skills are best suited for them. In a market economy, employees and employers make these determinations together. Entrepreneurs start new business and try to hire the best people for the jobs these businesses create. Nobody needs to check in with a government bureaucrat and it doesn’t cost the taxpayer a dime. While not perfect, the entire process is remarkably efficient. Jobs are created to provide the goods and services that people want and need when they want and need them. And when consumers change their preferences, the economy adapts accordingly.

Take Google, for example. Google was incorporated in September of 1998. By 2008, Google employed 20,000 people. It didn’t cost the American people anything to create these jobs. But the American people, and the rest of the world, have benefited greatly from Google’s excellent search engine and other innovative products like Google Maps, Google Earth, and Gmail.

Google shows us how jobs are created in a market economy. Without imposing on the American taxpayer, they made a superior product for consumers and 20,000 jobs have been created. As a result, humanity reaps the benefit of being able to use Google’s superior products. And as an added bonus to the government, Google pays millions in taxes each year.

Consider Exxon Mobil as another example. Even in these challenging economic times, Exxon Mobil earned billions in profits, employs 80,800 employees, and pays billions of dollars in taxes and fees to the government every year. Exxon Mobil makes money because people are willing to buy, without being forced by the government, Exxon Mobil’s gasoline and other products. When Exxon Mobil hires a new employee, it doesn’t receive money from the federal government to help create that new job, because Exxon Mobil sells a product people will voluntarily buy.

So if Google and Exxon Mobil can create jobs without Federal subsidies and payments, why do so-called “green jobs” need to cost the American taxpayer so much? President-elect Obama says his 5 million new green jobs will cost $30,000 taxpayer dollars per job. And Obama’s plan is far more optimistic than those of even his closest allies. 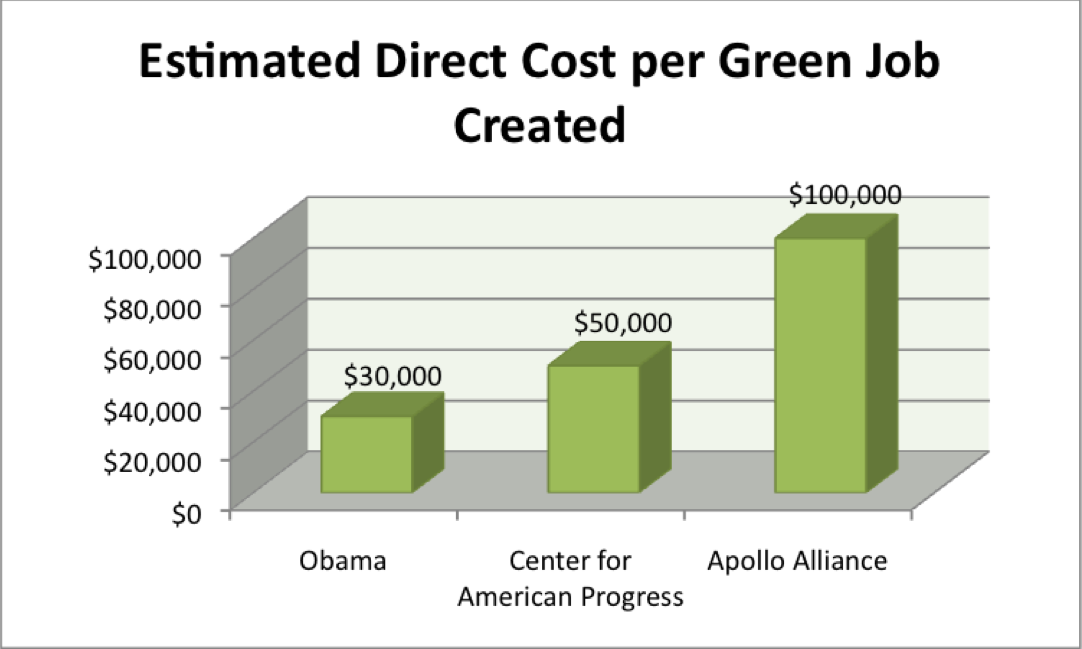 The Center for American Progress (whose CEO heads Obama’s transition team) calculates that it would take government spending of $100 billion to create 2 million jobs. By their calculations, it costs the taxpayer $50,000 to create a single “green job.” The Apollo Alliance (whose founder served on Obama’s campaign staff) released a study which calculates that it would take $500 billion in taxpayer dollars to create 5 million jobs. That works out to a taxpayer “investment” of $100,000 per green job.

These green jobs are awfully expensive. And even the Apollo Alliance admits their numbers have little basis in reality. According to the Wall Street Journal, “Kate Gordon, co-director of the Apollo Alliance, says the numbers are less important than the message. ‘Honestly,’ she says, ‘it’s just to inspire people.’”

Inspiration, it seems, is in the eye of the beholder, for it is hardly inspiring to consider that even with the President-elect’s most optimistic assumptions, $30,000 in government subsidies are necessary to create every new government-inspired green job. And if such a plan is actually implemented, it might indeed create some new jobs, but it is also going to destroy a lot of existing jobs through the increased tax burden necessary to carry out his plan. The $30,000 to $100,000 per job has to come from somewhere and that somewhere is people with real jobs today – working at Google or Exxon Mobil for example – that pay taxes on the income they earn from their real job. These people didn’t ask the government for a dime, nor were their jobs created by the government and yet they will be paying the Obama green jobs tax.

Finally, the fact that Obama’s green jobs require such lavish government subsidies is proof that they simply fail the market test. That is to say, consumers currently do not choose to voluntarily hand over enough money for the products and services created by green jobs otherwise they wouldn’t need such a lavish government subsidy in the first place. This economic inefficiency will only make the country poorer in the long run. After all, you don’t make consumers better off by forcing them to buy products and services that they wouldn’t have purchased voluntarily in the first place.

Americans Support OCS Leasing Two to One in New Poll