The Obama Administration has released its 2014 National Climate Assessment (NCA), with the goal of prodding Americans into supporting immediate action to fight manmade climate change. As we will document in this post, the science cannot support the scary claims. Thus the NCA is written with misleading section headers that obscure what even the latest IPCC report has to say about hurricanes, tornadoes, and even drought in the United States.

Beyond the overblown scare tactics, the “solutions” proposed in the NCA do not fit the bill: One can’t justify why it makes sense for the federal government to impose regulations and/or taxes on the U.S. economy,, without knowing what other major emitters (such as China and India) are going to do over the next century. The state-level initiatives against greenhouse gas emissions are even more dubious. These inconvenient truths explain why the NCA never tries to present an actual cost/benefit justification for the proposed measures. Instead, the strategy is to first scare Americans, then offer policies that will fight the alleged menace—without explaining the marginal changes from the policies and the corresponding costs in terms of economic growth and higher energy prices.

The Time to Panic Is NOW

The most notable aspect of the 2014 NCA is its switch from possible future threats to warnings about dangers happening right now. We can see this shift in the introductory section of the Overview which contains the following language:

Climate change, once considered an issue for a distant future, has moved firmly into the present.…This National Climate Assessment concludes that the evidence of human-induced climate change continues to strengthen and that impacts are increasing across the country.

What is new over the last decade is that we know with increasing certainty that climate change is happening now. While scientists continue to refine projections of the future, observations unequivocally show that climate is changing and that the warming of the past 50 years is primarily due to human-induced emissions of heat-trapping gases. [Bold added.]

This shift in the rhetorical focus is certainly understandable, from the Administration’s point of view: The more time passes, the weaker the case for aggressive intervention becomes. Indeed, the peer-reviewed research contained in the latest IPCC report is moving in the opposite direction from the NCA, despite the efforts of government representatives to spin the results to the public. Economist Richard Tol actually took his name off of the “Summary for Policymakers” because he said the latest research was pointing to a strategy of adaptation, yet instead of hearing the truth the public was being scared with apocalyptic rhetoric.

Even taking the Administration’s approach at face value, the actual physical science makes it very difficult to attribute specific weather events to long-term changes in the climate. After all, as the defenders of the popular computer models remind us whenever there is a cold snap or global temperatures fail to rise: “There is natural variability that can mask the long-term trend.” But that very variability means it is difficult to blame, say, Hurricane Sandy on human emissions of carbon dioxide.

We can see the tension between the NCA’s desire to scare Americans into immediate action, versus the limited claims one can make from the science. For example, here’s a snapshot of page 14 from the NCA Overview: 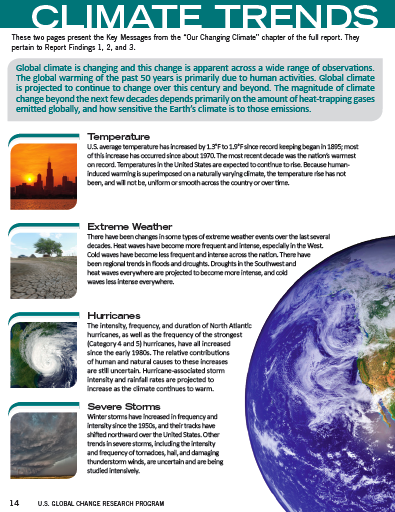 The casual reader is sure going to walk away thinking that human emissions are causing hurricanes, severe storms, and other “extreme” weather events, right? Yet if one reads the fine print, he sees that actually scientists can’t reliably attribute hurricanes or tornadoes to manmade climate change.

Let’s get some more of the claims from the NCA, before we go to the latest IPCC report to see how they hold up. The following excerpts once again come from the Overview of the NCA. Note how (once again!) the bold section headers are much scarier than the actual content contained for the various points:

2. Some extreme weather and climate events have increased in recent decades, and new and stronger evidence confirms that some of these increases are related to human activities.

Changes in extreme weather events are the primary way that most people experience climate change. Human-induced climate change has already increased the number and strength of some of these extreme events. Over the last 50 years, much of the United States has seen an increase in prolonged periods of excessively high temperatures, more heavy downpours, and in some regions, more severe droughts.

5. Climate change threatens human health and well-being in many ways, including through more extreme weather events and wildfire, decreased air quality, and diseases transmitted by insects, food, and water.

Climate change is increasing the risks of heat stress, respiratory stress from poor air quality, and the spread of waterborne diseases. Extreme weather events often lead to fatalities and a variety of health impacts on vulnerable populations, including impacts on mental health, such as anxiety and post-traumatic stress disorder….

6. Infrastructure is being damaged by sea level rise, heavy downpours, and extreme heat; damages are projected to increase with continued climate change.

Sea level rise, storm surge, and heavy downpours, in combination with the pattern of continued development in coastal areas, are increasing damage to U.S. infrastructure…

We have already shown that the NCA admitted it couldn’t blame hurricanes and tornadoes on humans, so it focuses instead on flooding and drought—which are of course regional-specific items (the same area can’t simultaneously be hurting from heavy downpours and drought). When it comes to an example of human suffering caused by these trends, one of the examples the NCA picks “post-traumatic stress disorder.” Is that really what most Americans have in mind when hearing that climate change is causing immediate harms?

In order to balance the NCA’s scary claims, let’s look at some excerpts from the most recent IPCC report on what the physical science can say about extreme weather events:

Is this the picture that the NCA paints of the cutting-edge science? Would Americans know from the Administration’s press release that the latest IPCC report says that scientists’ ability to blame drought since the 1970s on climate change has decreased since the previous report (AR4) was put out in 2007—and that in particular, that the “frequency and intensity of drought” in central North America has likely decreased since 1950?

Thus far we’ve seen the NCA push the envelope in scaring Americans into thinking there are demonstrable, human-caused changes wreaking severe impacts as we speak. But what does the NCA recommend be done about this alarming state of affairs?

In the chapter 27 on mitigation, the NCA first discusses “voluntary” mitigation strategies, but then moves on (of course) to government policies at various levels to force compliance with emissions goals. Yet here they run into the problem that global climate change is a global issue:

Moreover, through the President’s Climate Action Plan, the Administration has committed to additional measures not yet reflected in the EIA’s projections, with the goal of reducing emissions about 17% below 2005 levels by 2020. Still, addition­al and stronger U.S. action, as well as strong action by other major emitters, will be needed to meet the long-term global emission reductions reflected in the B1 scenario. [NCA p. 657, bold added.]

The chapter has estimates of the possible economic cost to the United States of meeting various benchmarks, but it doesn’t give a system wide cost/benefit analysis. The reason for this omission should be obvious: We can’t say what the impact on global greenhouse gas emissions will be, in response to (say) a U.S. federal carbon tax or cap and trade program, without knowing what Europe, China, and India are doing as well. In particular, if the developing world chooses to emphasize economic growth rather than carbon mitigation (as they have been doing and giving every reason to believe will continue to do), the long-term impact on climate change—even using the Administration’s preferred computer simulations—will be negligible. Americans would impair their own economy with little to show for it.

To see just how significant this point is, consider the results when climate scientist Chip Knappenberger used a standard computer model and parameters in late 2012 to estimate the impact of a total ban on U.S. carbon dioxide emissions. He found that by the end of the 21st century, a total cessation of U.S. emissions would result in the globe being cooler by 0.2 degrees Celsius. Keep in mind that this number reflects a total halt in U.S. emissions; in practice, any government measure will only partially reduce the U.S. contribution to global warming this century. Knappenberger’s point is that when U.S. policymakers argue over possible policies to address climate change, the public should keep in mind that they are quibbling over how to reduce 0.2 degrees of Celsius that the U.S. contributes (in standard computer simulations) by the year 2100; the rest of the projected warming is due to emissions from other countries.

The Administration’s National Climate Assessment marks a clear rhetorical shift in trying to scare Americans about harms occurring today from manmade climate change. The problem they immediately run into is that the science cannot support the scary claims. Thus the NCA is written with misleading section headers that obscure what even the latest IPCC report has to say about hurricanes, tornadoes, and even drought in the United States.

Regardless of the specific impacts of climate change on the United States, the Administration faces another huge hurdle with its agenda: Country-specific measures at slowing emissions can do little to impact global climate change. It is thus difficult to justify, on a cost/benefit basis, why Americans should support the Administration’s preferred interventions into the economy, such as cap-and-trade, carbon taxes, and bans on new coal-fired power plants. Instead, Americans are simply shown scary items to make them fear “climate change,” so that they will support any measure that can be described as “fighting climate change.”