According to BP’s energy outlook, fossil fuels will continue to provide most of the world’s energy, supplying 81 percent of global supply in 2035. Renewable energy, excluding hydroelectric power, is expected to almost triple its share by 2035, but still only represent just 8 percent of global supply. In the BP forecast, about one-third of the increase in global demand by 2035 is supplied by natural gas, another one-third by oil and coal together, and another third by non-fossil fuels. Carbon dioxide emissions from energy consumption are expected to increase by 25 percent between 2013 and 2035, but their growth slows in the latter decade of the forecast.[i] 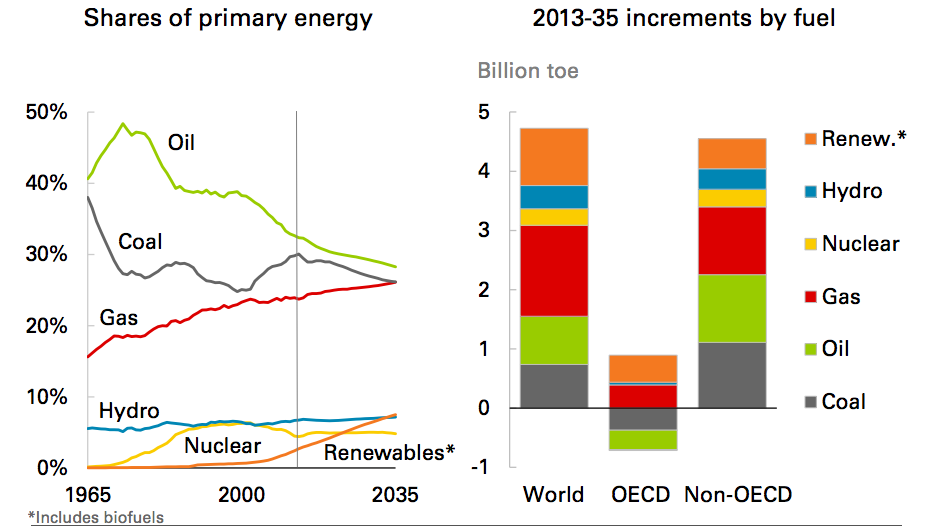 According to BP, primary energy consumption is expected to increase by 37 percent between 2013 and 2035, with annual growth averaging 1.4 percent. Almost all of the projected growth (96 percent) is from the developing countries with energy consumption growing at 2.2 percent per year. Developing Asia, where energy growth had averaged 7 percent per year since 2000, is projected to slow to 2.5 percent between 2013 and 2035, ending the rapid growth there, which was driven by industrialization and electrification. The slowing of energy demand is due to slower economic growth and a reduction in energy intensity (energy consumption per unit of GDP).

In the developing countries, energy demand growth is fairly evenly spread among the major fuel categories in BP’s forecast—a quarter each for oil, natural gas, coal, and non-fossil fuels. In the developed countries, reductions in the demand for oil and coal are countered by increases in natural gas and renewables, in roughly equal parts. 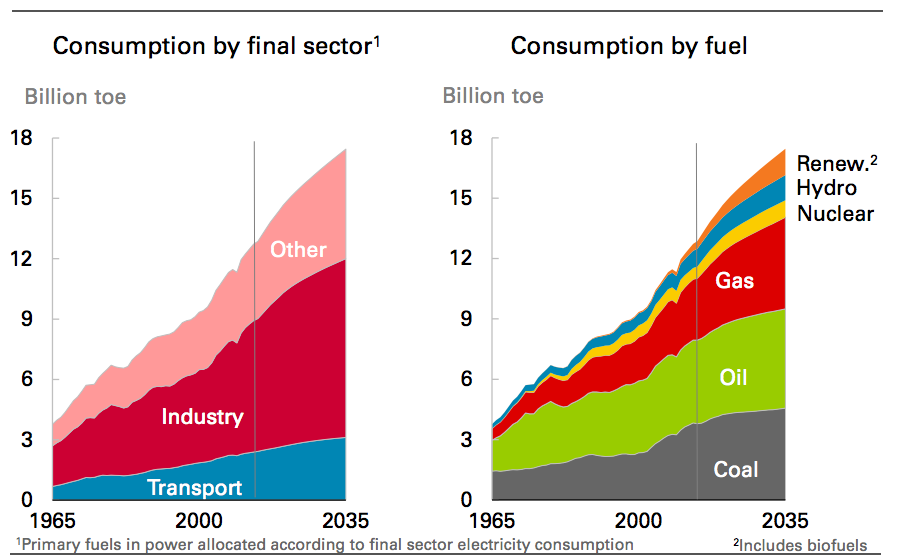 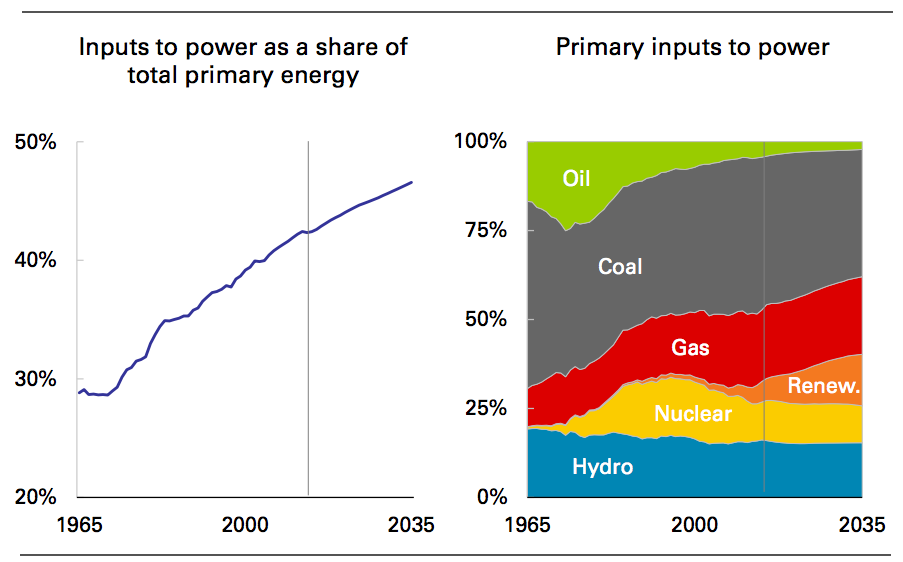 The BP Outlook assumes continued growth in new forms of energy, which have been enabled by technological development and large investments. Improved technology and productivity are expected to make a significant contribution to supply growth in the BP forecast. New sources of energy—renewable energy, shale gas, tight oil, oil sands, among others—together increase at a rate of 6 percent per year and contribute 45 percent towards incremental energy production in 2035. 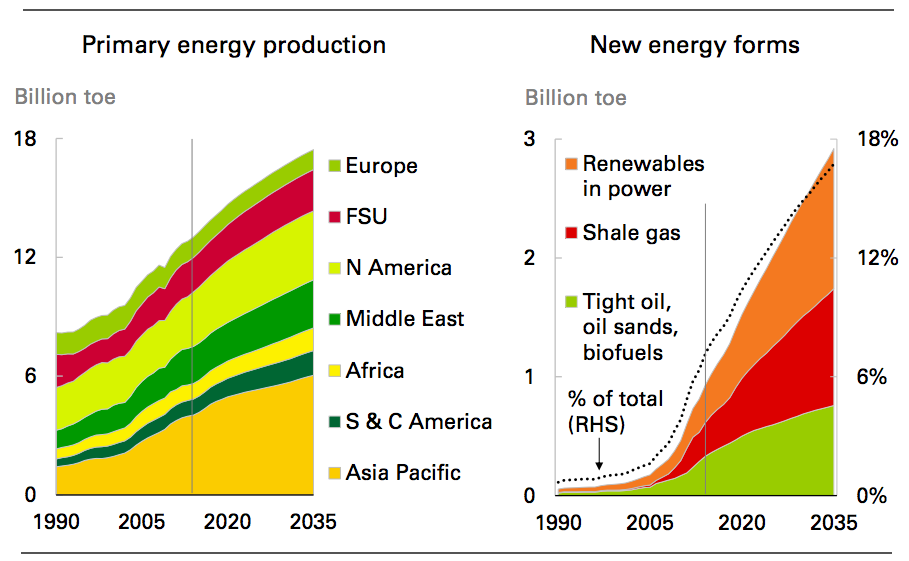 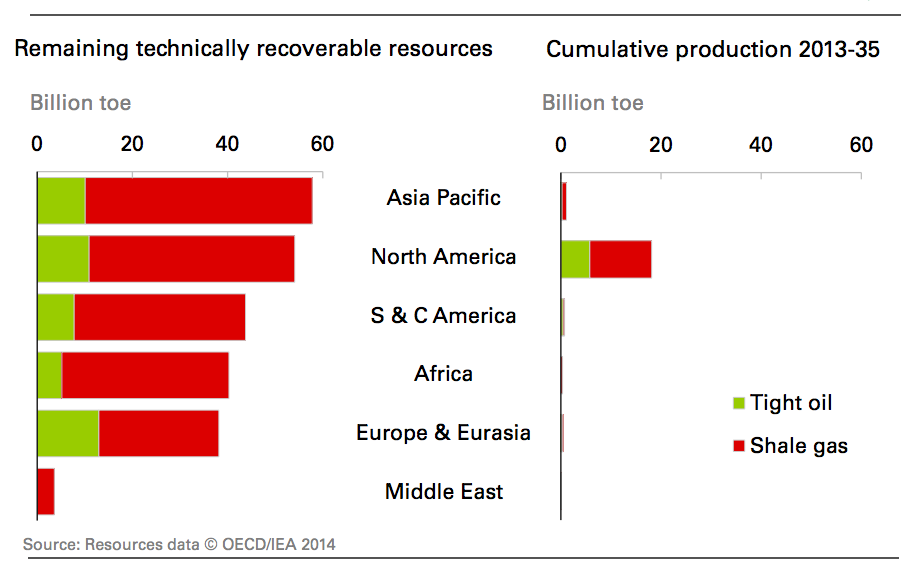 U.S. shale gas production is expected to grow rapidly in the BP Outlook at 4.5 percent per year, although growth rates moderate slowly. Growth in U.S. tight oil, however, is expected to flatten in the forecast, due to high well decline rates and less extensive resources than for shale gas.

BP expects the Organization of Petroleum Exporting Countries (OPEC) to regain oil market dominance and exceed their historic record production levels by 2030 as U.S. tight oil growth flattens out in the forecast. But, in the near term, demand for oil from OPEC is expected to remain under pressure as U.S. tight oil production remains strong. U.S. production of tight oil has been the main driver in supply growth that prompted the large drop in oil prices since June 2014. 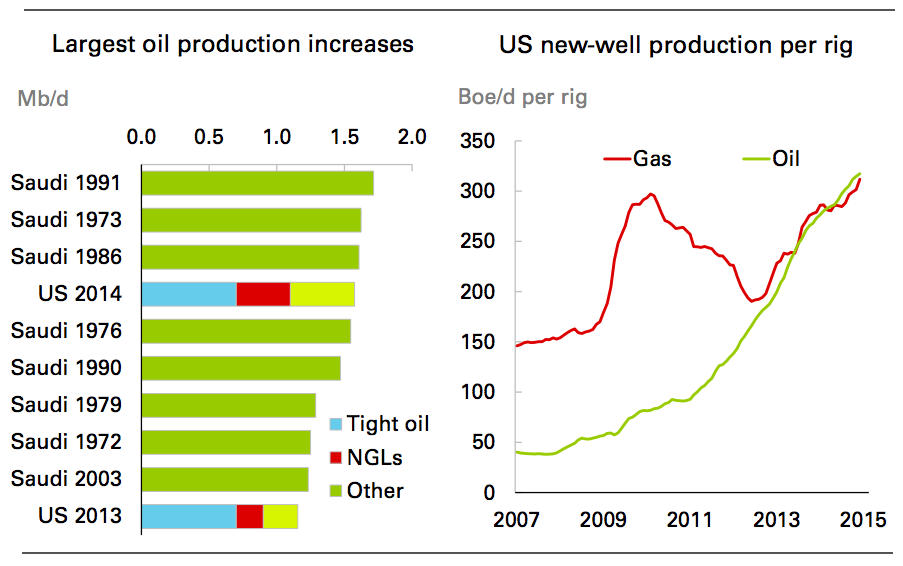 BP expects the global demand for oil and other liquids such as biodiesel to increase by about 19 million barrels per day, reaching 111 million barrels per day in 2035. China is expected to replace the United States as the world’s top oil consumer by 2035. BP expects the United States to become self-sufficient by the 2030s due to its increased oil production and lower demand for energy.

Sorry EPA, There’s No Evidence You Care About Grid Reliability