A popular cry among opponents of U.S. military engagement in the Middle East is to “bring the troops back home!”  Our focus at IER is the global energy market and not defense policy, which is why we are interested to note a similar trend among large oil companies who are bringing their business back home to America.  Naturally, we welcome their return.

A recent WSJ article reports on the new trend:

For decades, its main stomping grounds were in the developing world—exotic locales like the Persian Gulf and the desert sands of North Africa, the Niger Delta and the Caspian Sea. But in recent years, that geographical focus has undergone a radical change. Western energy giants are increasingly hunting for supplies in rich, developed countries—a shift that could have profound implications for the industry, global politics and consumers.

Driving the change is the boom in unconventionals—the tough kinds of hydrocarbons like shale gas and oil sands that were once considered too difficult and expensive to extract and are now being exploited on an unprecedented scale from Australia to Canada.

At this point, some readers may hang their heads in disappointment. “Aww, too bad,” they might think. “It looks like Australia and Canada are doing well for themselves, but the U.S. is still in a crisis.”

Yet hold on. The WSJ article continues:

The U.S. is at the forefront of the unconventionals revolution. By 2020, shale sources will make up about a third of total U.S. oil and gas production, according to PFC Energy, a Washington-based consultancy. By that time, the U.S. will be the top global oil and gas producer, surpassing Russia and Saudi Arabia, PFC predicts. [Bold added.]

This prediction might shock some readers, who have bought into the myth that the U.S. is an energy-starved country. Yet right now the U.S. is the third-largest oil producer in the world, behind Russia and Saudi Arabia. The reason we still import so much oil is that the U.S. is (by far) the largest consumer of oil. This isn’t a reason to fret, incidentally; it reflects our high standard of living, and the fact that Americans are much more dispersed geographically than, say, the Europeans.

IER’s new report on the fossil fuel inventory of North America shows that the new technological advances in unconventional extraction will soon make this continent the breadbasket to the world of energy supplies. Here are just some highlights of the new report: 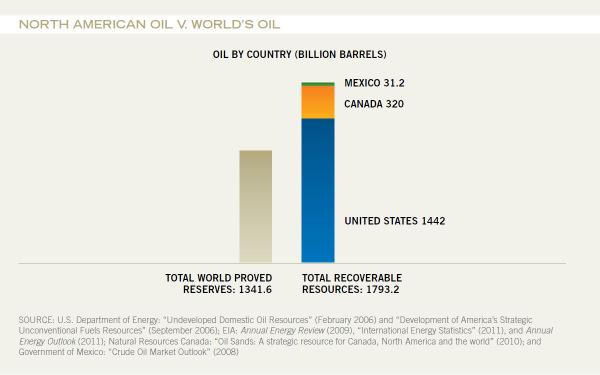 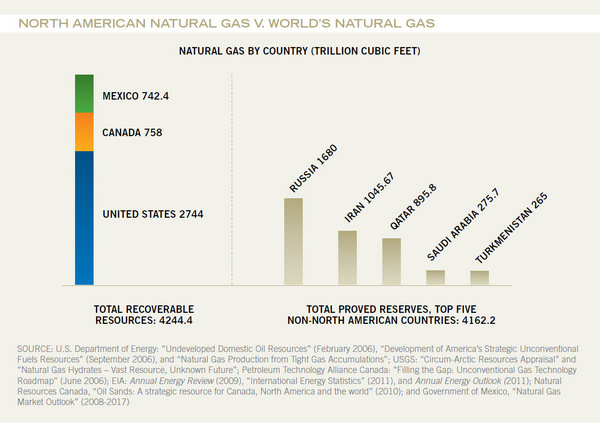 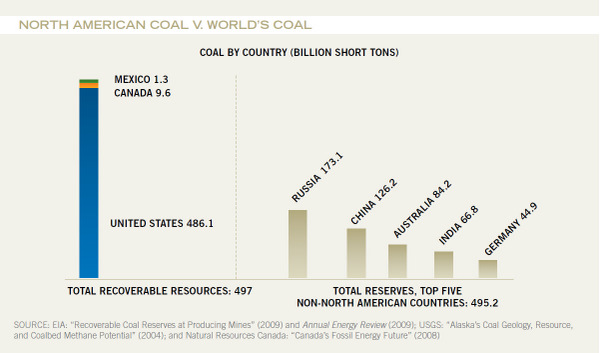 This energy abundance is hardly the image most Americans have been presented in their schooling and through watching the mainstream media. Instead they have been taught the “fact” that the United States is an energy hog, gobbling up dwindling resources and pushing the planet to the edge of catastrophe.

The new inventory report shows just how wrong this common view is. Looking just at the United States but especially if we include our neighbors to the north and south, there are literally centuries’ worth of fossil fuel resources right here at home.

There is nothing wrong with importing oil or other goods from foreign countries. Economically, it is most efficient for countries to specialize in their “comparative advantage” and trade with each other to maximize per capita living standards of all people.

Yet many alarmists are claiming that the U.S. government must intervene in energy markets in order to wean Americans from their alleged “addiction” to fossil fuels. The new inventory report shows just how foolish and unnecessary this government intervention is. There is plenty of accessible energy even within this continent, if only the government would get out of the way and let private businesses do their jobs.