American Electric Power’s announcement last week that it will soon begin shutting down one quarter of its coal-fired power plants, combined with the news that replacing just a fifth of coal-fired power in Illinois could raise utility rates by as much as 65 percent over the next six years, is making the long-simmering issue of coal suddenly red hot. If the Illinois projections are true, it also appears to give the lie to the refrain that cap and trade, or other efforts to phase out coal, would be cheap and easy. On the other hand, there is something slightly odd about this story, as natural gas-fired power is now very competitive with coal on price. Shouldn’t we be able to replace coal with gas at a more reasonable cost than these news stories seem to suggest?

A look through the basic numbers of the coal-fired power fleet may contain the rough outline of an answer to this question, and it may turn out that the costs of phasing out coal power will be front-loaded instead of back-loaded. In other words, we’re going to take our biggest cost hits now, with the costs declining as time goes forward. At the same time, however, the numbers suggest the likelihood that a significant portion of coal power is likely to survive for a long time, such that coal-hating environmentalists will be very disappointed with the results a decade or two from now.

There are 595 coal-fired power plants in the U.S. in the Department of Energy’s 2008 database (the most recent available), providing 337 gigawatts of electricity, nearly half the nation’s total. Right now the consensus estimate is that we’re going to close down about 21 gigawatts of coal capacity (about 6.2 percent to the total) in the very near future, as perhaps as much as 60 gigawatts by 2017 (about 18 percent of total).

The average age of the coal fleet is 42 years; the oldest operating plant, Interstate Power and Light’s Linn unit in Iowa, first began operating in 1921. Figure 1 shows the share of coal plants by the decade of their first operation and their cumulative power output; over one-quarter of the fleet was built in the 1950s, though as can be seen, the coal plants built in the 1970s were much larger by capacity. 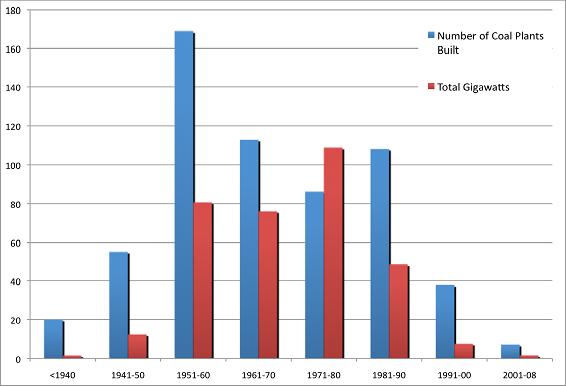 The age of coal-fired plants is misleading, however, as most plants have been constantly upgraded over the years, and can be compared to a house built in 1950 that has a remodeled kitchen, bathrooms, new attic insulation, heat and A/C, and a new roof. In the case of power plants, improvements emphasize better turbines and more efficient boilers. Maybe a better comparison is an old car with a rebuilt engine and fuel injection replacing carburetors, or an aging film starlet with plastic enhance . . . never mind.

The more important variable is the size of the plants. Figure 2 displays the distribution of our 595 coal-plants by power output. The 130 largest coal-fired plants—22 percent of the total fleet—produce 65 percent of total coal-fired electricity. (The two largest coal plants are Georgia Power’s two 3,500-megawatt behemoths, the Bowen and Scherer units, each with four boilers.) By contrast, the 373 plants that produce less than 500 megawatts generate only 16 percent. In fact, the ten largest coal-fired power plants produce nearly 9 percent of total coal electricity; the ten largest plants produce more power than the 310 smallest coal plants combined. If the bottom half of the output distribution of coal-fired plants in the nation were shut down, it would only reduce coal use by about 15 percent. 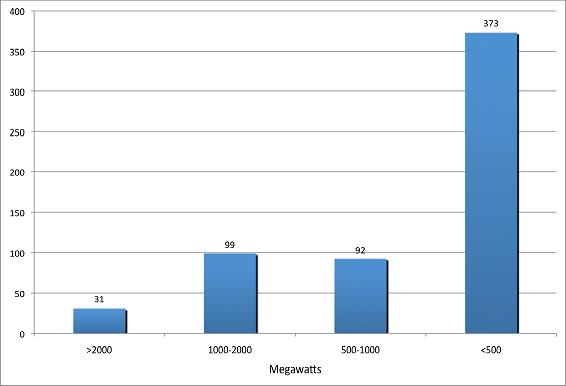 While some large, 1,000-megawatt-plus coal plants may be closed down, it is more likely to be the smaller plants that will be shut down for the simple reason that the fixed capital costs of additional pollution abatement will be too high, while the costs will not be excessively high for the larger plants. (Would the University of Alaska Fairbanks, for example, really want to spend the money to abate pollution from its 13-megawatt coal units? Will it make any sense to attempt carbon capture and sequestration on tiny coal plants?) Conversely, although new gas-fired power has become very cost competitive on average, the replacement cost of small coal units with small gas units (or renewables such as wind and solar that require gas-backup) is likely to be higher than average in many cases. Hence, the kind of numbers we’re seeing out of Illinois.

This discussion leaves out of account whether new environmental regulations for coal-fired mercury emissions make sense purely in terms of health and environmental benefit, something I’ve commented on in this space before.

Is 80 Percent Renewable Energy by 2050 Possible?—Depends on Who Is Making the Forecast