The United States has enormous coal resources and uses them to generate about 45 percent of the nation’s electricity. But environmentalists are attacking coal from both the production and consumption side in conjunction with their allies in the Obama administration.  The administration is only leasing about  half as much coal production on federal lands as the Bush administration and is denying coal mining permits. On private lands in the Eastern United States, the Environmental Protection Agency (EPA) has curtailed surface mining permits by stating that such mining could undermine the quality of the local water.[i] EPA has also announced a flurry of new regulations which will result in massive coal unit retirements, expensive retrofitting of equipment needed to meet the new standards, and ultimately, much higher electricity prices from coal units or their replacement units. Any way you slice it, the Obama administration is trying its best to end coal use in the United States

The United States has the largest coal reserves of any country in the world, totaling 261 billion short tons. But its total coal resources are much higher at 10.3 trillion short tons, of which 486 billion short tons have been estimated by the Energy Information Administration (EIA) to be recoverable.

According to the EIA, U.S. coal production in 2010 was 1,084 million short tons. Coal production in 2011 is expected to be slightly higher with coal production for the first 11 months of 2011, 0.3 percent higher than for the same period in 2010. Most of the coal (93 percent) consumed in 2010 was used to generate electricity, producing more electricity than any other generating source. Almost 45 percent of the electricity generated in 2010 was produced by coal-fired plants.[ii] The industrial sector, second to the generating sector in coal consumption, consumed almost 7 percent of total coal consumption in 2010. The remainder was used by the residential and commercial sectors. The United States also exports coal. In 2010, about 82 million short tons of U.S. coal were exported, 38 percent more than in 2010, and almost 8 percent of total coal production. 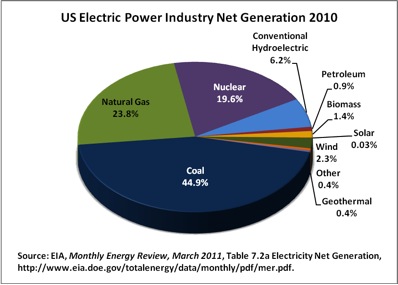 Permit and Lease Activity under the Obama Administration

In 2010, the Obama administration used a roundabout approach to put a halt to new surface mines in Appalachia. They issued new “guidance” on water conductivity that has brought new surface mining permits to a halt in Appalachia, ostensibly in order to protect mayflies.

In a surface mine, the miners remove the dirt and rock from the surface to expose the coal seams below. In mountainous areas, they frequently pile the dirt and rock debris in the surrounding areas or valleys. As water flows through these “fills” it becomes saltier, and more conductive of electricity. Salty water can be harmful to mayflies. This saltier water, however, is not harmful to humans and in fact meets drinking water standards.

Bringing a halt to new surface mines was the result of EPA’s issuance of new water “guidance” concerning water conductivity (i.e. the salt content of the water) and its alleged impact on the mayfly. EPA Administrator Lisa Jackson admitted that there are “no or very few valley fills that are going to meet this standard.”[iv]

EPA’s new standard on mountaintop mining is under legal challenge. However, the agency has stalled surface mining permits in states such as Kentucky and West Virginia causing coal companies and miners to be concerned about their future once they have finished mining their current permits. In September, the EPA denied 19 surface mining permits in eastern Kentucky, impacting nearly 126 million short tons of lost coal production and 950 lost mining jobs over the life of those mines. Under the Clinton and George W. Bush administrations, hundreds of such sites received federal permits.[v]  Between 2000 and 2008, for example, coal companies received permits for 511 valley fills.

Leases of coal are also down due to current federal policy. During the Bush administration, an average of 515 million tons of coal was leased annually between 2002 and 2008. By contrast, over the past 3 years, the amount of coal leased has averaged 272 million tons annually, about half that of the Bush administration. The Bureau of Land Management did not hold lease sales in Wyoming in 2009 or 2010 and has held just four in 2011.

The EPA has also issued new regulations affecting electric generating plants causing over 70 percent of coal-fired capacity to need to be retrofitted with environmental equipment between 2012 and 2015. According to the North American Electric Reliability Corporation (NERC), “environmental regulations are shown to be the number one risk to reliability over the next one to five years”.[vi] That’s because the regulations are to be incorporated during a very short time frame to a large number of coal units. It takes an average of 18 months to add the required environmental equipment to those units that will still be economic once the cost of the environmental equipment is taken into account. Further, NERC projects that beyond the 38 gigawatts of announced plant retirements (23 gigawatts of which are coal-fired), another 36 to 59 gigawatts of capacity will be off-line by 2018 due to 4 EPA regulations considered in its analysis. That is about a quarter of U.S. coal-fired plants, and the first time in U.S. history that coal-fired capacity is expected to decline.

The Institute for Energy Research looked at 2 of the 4 regulations NERC considered and expects almost 30 gigawatts of generating capacity to be retired, nearly 10 percent of all U.S. coal-fired capacity, and twice the number predicted by EPA.[vii]

According to the EPA, these new regulations are needed to improve air quality. But, according to EPA’s own website, air quality has already improved substantially due to regulations already in effect. While population, energy use, and GDP have grown over the past 30 years, pollution emissions have declined by 67 percent.[viii] (See chart below.) 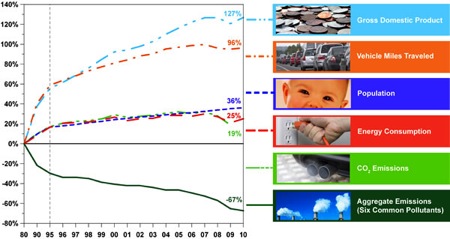 Despite the U.S. having the largest supplies of coal in the world, the Obama Administration has made it clear that coal is not wanted as a major fuel in the United States and its federal agencies have taken actions on both the consumption and the production side to see its future demise. The changes are made in the name of air quality but air quality has already improved dramatically due to existing regulations and new coal-fired units are already required to include the necessary environmental equipment.

Further, EPA has curtailed mountaintop mining permits and the Department of Interior has leased the lowest amount of coal lands in recent history further exasperating future coal production. These changes will mean higher prices for the consumer of electricity to cover the cost of the additional environment equipment on coal-fired plants and the construction of new plants to replace retired units. There will also be fewer coal mining jobs once current mountaintop mining permits are exhausted and the currently leased mines are depleted of coal.