Many of France’s nuclear units are down for inspection. As a result, coal and natural gas generation has more than doubled. Last month, generation from fossil fuels was the highest in 32 years in France and nuclear generation was the lowest since 1998. As a result, French month-ahead power prices escalated to near the highest levels since 2009.

Germany is replacing its nuclear units with renewable energy (wind and solar) as part of its energy transition, the so-called Energiewende. It is using mainly coal to back-up its intermittent renewable energy and as a result, it has increased its coal-fired generation. Due to the higher cost of wind and solar units, residential electricity prices have escalated and are 3 times that of the United States. 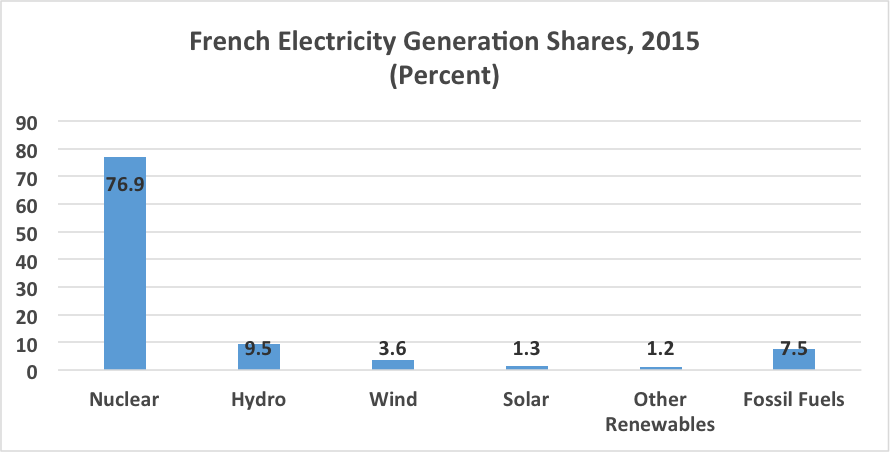 Note: Other renewables are geothermal, biomass, and other.

But this, year, France’s nuclear regulator ordered safety checks on a number of its reactors, and those safety checks are taking longer than expected. France’s nuclear generation began dropping early this year and took a major decline in April that has continued into September. Its nuclear reactors produced 26.6 terawatt-hours of electricity in September, the lowest amount since August 1998. Since April, generation from coal and natural gas increased to compensate for the reactors off-line, and in September, they produced 4,132 gigawatt-hours, or 11 percent of the total.[i]

France has seven fewer reactors available than at the same time last year. France’s nuclear regulator ordered safety checks on 18 of its 58 units to rule out potential anomalies on steam generators. Six reactors, however, are expected to be back on-line this month.

France is also faced with the lowest hydropower output in 10 years, which is exacerbating the tight supply situation. Hydropower levels are down 25 percent so far this October compared to last year. 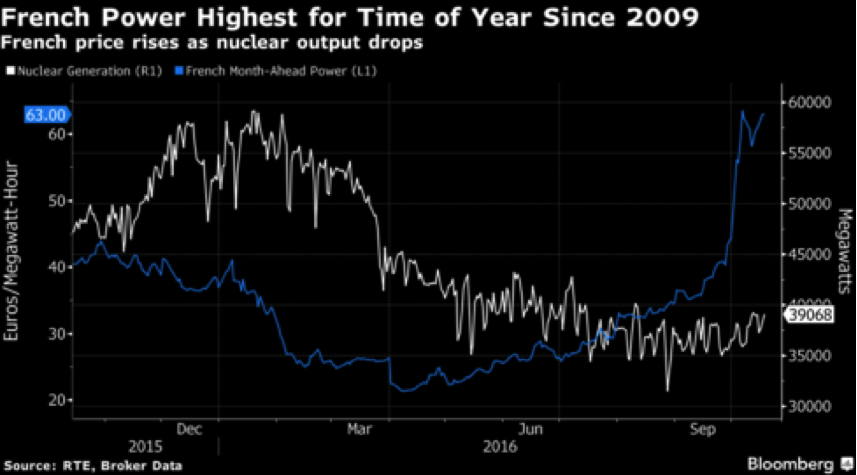 Unlike France, Germany is much more reliant on renewable energy and fossil fuels for its electricity generation than on nuclear power. That is because Germany decided to retire its nuclear units and promote renewable energy instead after the tsunami hit Japan’s nuclear reactors in Fukushima. While Germany gets 27.3 percent of its generation from non-hydroelectric renewable energy, it is also heavily dependent on coal and natural gas for base-load power and to back up its intermittent wind and solar power, generating over 50 percent of its power from fossil fuels. (See chart below.) 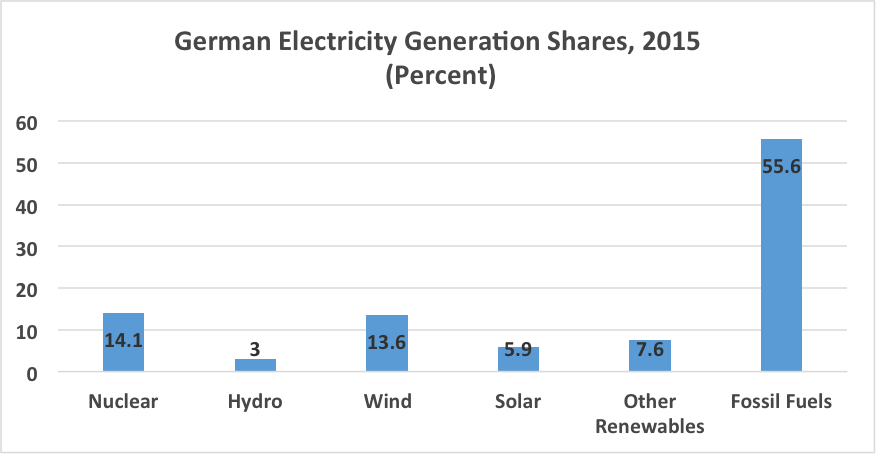 Note: Other renewables are geothermal, biomass, and other.

Germany’s plan is to shutter all of its nuclear units by 2022 and to have renewable energy provide 40 to 45 percent of its generation by 2025 and 80 percent by 2050[ii]—up from 30 percent in 2025. Replacing nuclear power with renewable energy has proven difficult, however, mainly due to the intermittency of wind and solar power. When wind and solar are not available to generate electricity, German power buyers turn to coal. In fact, Germany opened over 10 gigawatts of new coal fired power plants over the past 5 years.[iii]

Germany has over 20 gigawatts of lignite-fired electric generating capacity operating as of the beginning of 2015,[iv] generating about 25 percent of its electricity last year.[v] Lignite, also called brown coal, has the highest carbon dioxide emissions per ton when burned–a third more than hard coal and three times as much as natural gas.[vi] It is Europe’s most abundant and least-expensive domestic fuel, especially when located close to power plants. Germany also uses hard coal, which generated about 18 percent of its electricity.[vii]

Germany’s coal-fired generation last year declined by just a half percent and because its electricity demand remained essentially flat, the relatively inexpensive coal-fired power not needed domestically was exported–mostly to Austria, the Netherlands, France and Switzerland.[viii] Germany’s plan to reduce carbon dioxide emissions includes renewables replacing coal as well as its nuclear power, but its coal-fired generating industry refuses to go away.

Despite the large increase in solar and wind power, Germany is likely to miss its 2020 target to reduce its greenhouse gas emissions by 40 percent below 1990 levels.[ix] In fact, its carbon dioxide emissions increased last year by 0.8 percent.[x]

Coal is not going away in France and Germany as both countries need it to keep the lights on when nuclear units in France are down for inspection and as Germany’s energy transition brings in intermittent renewable energy to replace its retiring nuclear units. Coal, particularly lignite coal, is indigenous to Germany and supplies the majority of its power despite the dramatic growth in Germany’s wind and solar power industry.

[iv] In July 2015, Germany announced that it would mothball 2.7 gigawatts of the oldest lignite-fired capacity to meet its 2020 climate goals.

Correcting the Record on Greg Ip’s Criticism of IER Study