Hawaii, in addition to being President Obama’s first U.S. state to call home, has the most expensive energy in the country.  Because it is isolated from the U.S. mainland and it does not have oil, natural gas, or coal reserves of its own, its energy infrastructure and consumption are unique among the states. Because oil, natural gas, and coal are transportable, Hawaii depends heavily on these imported fuels to meet energy demand. Close to nine-tenths of Hawaii’s energy comes from petroleum, followed by coal and natural gas. Its electricity prices are over 3 times higher than the average electricity price in the nation. Because its main industry is tourism and because of its mild climate, Hawaii’s economy is not very energy intensive. In fact, per capita energy consumption in Hawaii is among the lowest in the nation. Due to heavy jet-fuel use by military installations and commercial airlines, the transportation sector is its leading energy-consuming sector, accounting for about one-half of the state’s total energy consumption. 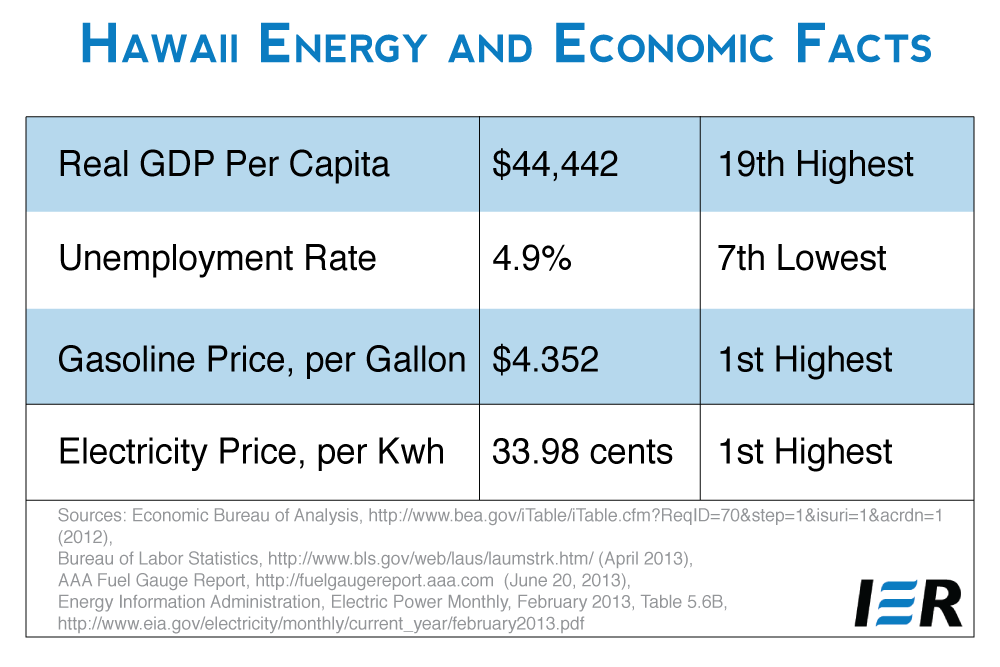 Hawaii has two refineries that depend on crude oil shipped from Alaska and on imports from foreign countries. The refineries are located near Honolulu on the island of Oahu and supply petroleum products to local markets. Hawaii has to rely on its ports to distribute petroleum products to the state’s individual islands. Except for jet fuel, Hawaiian consumption of most petroleum products is among the lowest in the country. Due to heavy use by military installations and commercial airlines, jet fuel makes up a larger share of total petroleum consumption in Hawaii than it does in any other State except for Alaska. Hawaii requires the statewide use of oxygenated motor gasoline.

Petroleum-fired power plants supply about three-fourths of Hawaii’s electricity generation. Coal generation provides 15 percent and renewable sources (wind, geothermal, biomass, and hydroelectricity) supply the remainder of the state’s electricity generation. Hawaii is one of seven states with geothermal power generation and ranks third among them. Electricity demand in Hawaii is among the lowest in the country due to its mild climate and its lack of significant manufacturing. More than one-third of all Hawaiian households use electricity as their primary energy source for home heating. However, due to the mild tropical climate, most households do not need to use any energy for home heating.

In June 2009, Hawaii extended its renewable electricity portfolio standard to require utilities to generate 40 percent of their net electricity sales from renewable sources by the end of 2030. 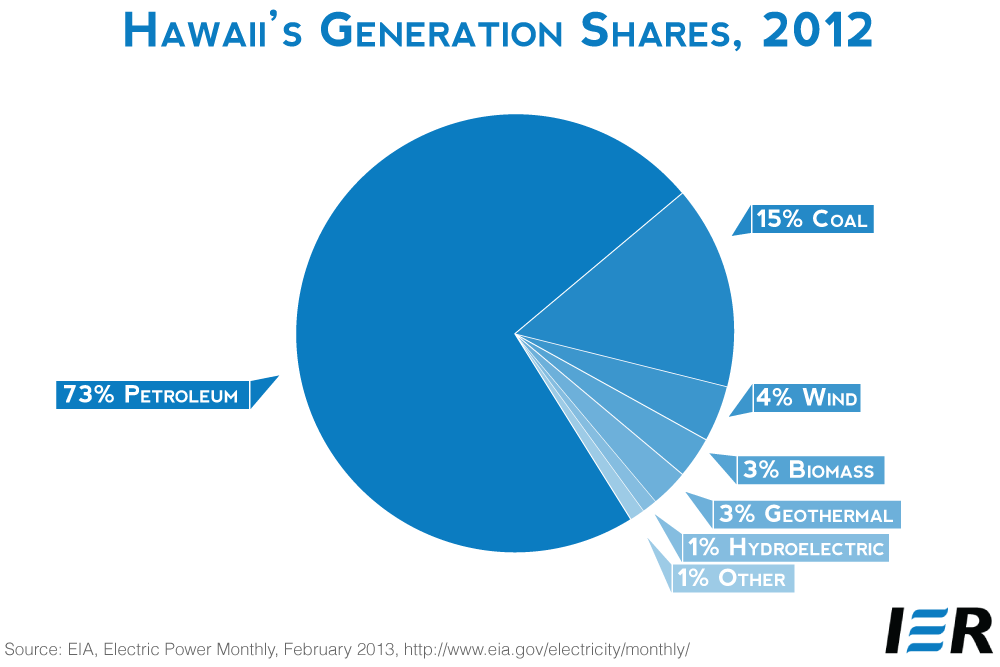 Below are some facts about Hawaii’s regulatory environment that are likely to affect the cost of energy or the cost of using energy. Although affordable energy is a vital component of a healthy economy, regulations frequently increase energy costs.

Hawaii caps greenhouse gas emissions. House Bill 226 mandates that statewide greenhouse gas emissions be reduced to 1990 levels by 2020.  Carbon dioxide, the largest occurring greenhouse gas, is a natural byproduct of the combustion of all carbon-containing fuels, such as natural gas, petroleum, coal, wood, and other organic materials, including biofuels. Today, there is no cost-effective way to capture the carbon dioxide output of the combustion of these fuels, so any regulations that limit carbon dioxide emissions will either limit the use of natural gas, petroleum, and coal, or dramatically increase their prices.

Hawaii established a renewable portfolio goal in 2001 where each utility was to establish goals to increase net renewable energy sales to 9 percent by the end of 2010. In 2004, the goal was replaced with an enforceable Renewable Portfolio Standard (RPS) mandate through SB 2474 which required 20 percent of electricity to be generated from renewable sources by the end of 2020. S.B. 3185 in 2006 made additional modifications allowing for solar water heating, seawater air-conditioning district cooling systems, and electrical conservation savings to qualify for the RPS. Another bill, H.B. 1464 in 2009, increased the mandate to the current level of 40 percent renewables by 2030. The current RPS targets are: 15 percent of net electricity sales by December 31, 2015; 25 percent by December 31, 2020; and 40 percent by December 31, 2030.

House Bill 1464 also established an Energy Efficiency Portfolio Standard (EEPS) as well as modifying the RPS. Until January 1, 2015, energy efficiency is included in Hawaii’s RPS. Beginning in 2015, energy efficiency and displacement or offset technologies will no longer be eligible to fulfill Hawaii’s RPS; they will be part of the separate EEPS. Hawaii’s EEPS set a goal of reducing electricity use by 4,300 gigawatt-hours (GWh) by 2030.

The State of Hawaii has no fossil fuel reserves, and must import the majority of its energy requirements. It has the highest energy prices in the nation due to both its isolated geographic location and its regulatory environment. Hawaii’s mandates for expensive and inefficient renewable sources, for example, will make it more difficult for the citizens of Hawaii to gain access to more affordable energy.  These programs, however, are akin to what President Obama has championed as being in the best interests of the United States.  His fundamental understanding of affordable energy’s paramount importance to a widely diverse and geographically and economically different America may be limited by his Hawaii upbringing, since Hawaii has a uniquely different energy situation than the rest of the nation.

Canadian Oil and Natural Gas Imports: How Important Are They?