In the months since we released this report, electricity producers have announced another 6 GW of impending plant closures as a result of EPA’s upcoming regulations. To see the updated information, click here for the updated report.

The United States has the world’s largest coal resources. In fact we have 50 percent more coal than Russia, the country with the next largest reserves. But coal use in the United States is under assault.

Before becoming President, Barack Obama promised to bankrupt coal companies. As President, he has tried various strategies to force Americans to use less coal. After failing to pass a national energy tax (cap-and-trade), the President vowed to continue his attack on coal stating, there is “more than one way to skin a cat.”

Currently, EPA is leading the Obama administration’s assault on coal with a number of new regulations. Two of the most important are the “transport rule” and the “toxics rule” (Utility MACT). Combined, these regulations will systematically reduce access to affordable and reliable energy. According to our report:

EPA modeling and power-plant operator announcements show that EPA regulations will close at least 28 gigawatts (GW) of American generating capacity, the equivalent of closing every power plant in the state of North Carolina or Indiana. Also, 28 GW is 8.9 percent of our total coal generating capacity. 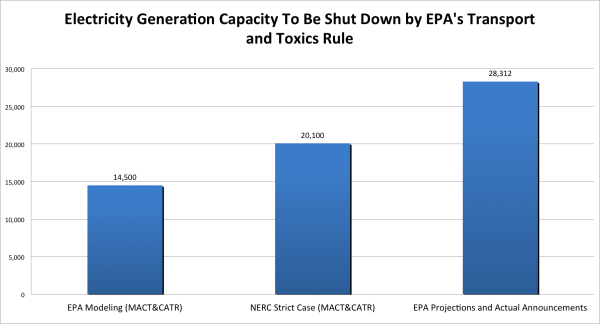 Current announcements and EPA projections indicate that EPA regulations have a dramatic impact on states reeling from economic hardship. 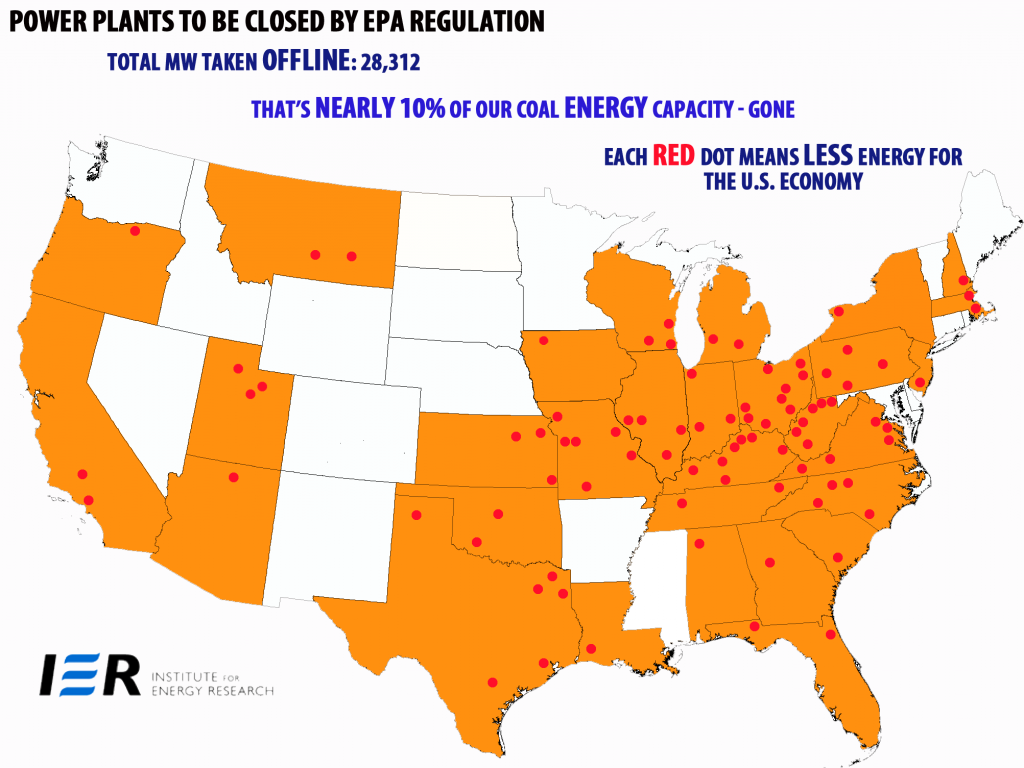 You can download the excel document by clicking here: Announced and EPA Projected Power Plant Retirements.

Notes:1.       All retirements announced by plant owners result from EPA regulation.  In each such case, the citation included directly identifies EPA regulations as the sole or main reason for the power plant’s retirement.

3.       According to the EPA, the Toxics Rule base case includes the Transport Rule.  Thus, theoretically, both the Toxics Rule Policy Case and Transport Rule Remedy Case (when controlled for their respective base cases) should not both independently identify closure of the same plant.  Nevertheless, the list shows a 2 GW overlap between the two rules.  This is, presumably, due to variance in the modeling platforms EPA utilized for both rules.

Individual power-plants often have multiple boilers, called “units,” that generate electricity.  EPA, in addition to overall modeling, models the impact that the Agency believes its regulations will have on each unit, at each power-plant in America.  EPA lists these results in “parsed files.”  When producing parsed files for a regulation, EPA will first create a business-as-usual “base” case parsed file where the Agency details what it believes will happen absent EPA’s new regulation.  Next, EPA creates a “policy” or “remedy” case parsed file showing how EPA believes plants will respond to a regulation.  Thus, one can find the difference between these two cases, and figure out the impact EPA believes a regulation will have, by comparing the policy/remedy case parsed file to the base case parsed file.  As such, the following steps were taken so that the list would only include those units EPA said would retire as a result of the Transport Rule and Toxics Rule:

Ensuring that Retirements are Result of EPA Regulation

All retirements announced by plant owners in news releases or through public filings on this list were due to EPA regulation.  In each such case, the source cited directly identifies EPA regulations as the sole or main reason for the power plant’s retirement.

Why is this list’s total retired capacity higher than EPA’s total?

Does this list include plants that will close even without the Transport Rule or Toxics Rule?

No.  The parsed file results used in this list do not include business-as-usual base case results.  In other words, if EPA modeled a unit to close even if the Transport Rule or Toxics Rule were not implemented, then that unit was not included.

EPA says only 9.9 GW will close, so why are these numbers higher?

Why do EPA’s RIAs say the Transport and Toxics Rule will retire 13.8 GW of coal-capacity, while EPA’s parsed files say the two rules will retire 14.5 GW?

When a power-plant operator announces that it is closing a certain unit, how do you know that is because of EPA regulations?

In each case where a retirement is attributed to public announcements, the cited source material lists EPA regulations as the sole or main reason for the plant’s retirement.

Some groups have said EPA regulations will retire 60 – 80 GW of coal-fired generation, but this list only shows 28 GW.  Does this mean those projections are wrong?

No.  If anything this list gives more credibility to those higher retirement projections.  This list is very conservative; it merely shows what units EPA says its regulations will close, plus specific units that plant-operators have said will close because of EPA regulations.  Those analyses that show higher power-plant retirements than this list lay out what the final overall impact of EPA’s regulation will be.  On the other hand, this list focuses just on the currently disclosed impact.  Plant-operators generally announce retirements only when required to by public filings.  Thus, this list will likely grow far higher.  However, because this list already finds twice as many retirements as EPA projected, the Agency’s claim that its regulations will have minimal impact on electric generation are clearly incorrect.

EPA has said that other projections showing a high coal generation retirements were based on incorrect assumptions.  Is that the case for this list?

No.  The only modeling in this list is from EPA.  Thus, any mistaken assumption would be EPA’s mistaken assumption.  Otherwise, the remaining data is from actual public announcements detailing the imminent or highly possible closure of specific units at specific power-plants.

The North American Electric Reliability Corporation (NERC) projected that most power-plants will retire because of EPA 316(b) cooling tower regulations.  Does this list account for the fact that EPA has since indicated it will pursue less stringent 316(b) regulations?

This list only includes the parsed files for EPA’s Transport Rule and Toxics Rule modeling.  EPA’s modeling for the 316(b) is not included.  Public unit retirement announcements largely cited the Transport Rule and Toxics Rule as causing a unit to retire; there is little discussion of 316(b) regulations.  This is likely due to the fact that EPA ultimately chose to pursue less stringent cooling tower rules than the Agency originally insinuated.  Regardless, all of the publically announced plant retirements listed are retiring due to EPA regulations.

This list compares its total numbers to NERC’s worst case analysis.  Does that include NERC’s analysis of 316(b) regulations?

No.  The NERC analysis was broken down between the Transport Rule, the Toxics Rule and 316(b) regulations.  The chart compares the list only to the NERC Transport Rule and Toxic Rule “strict,” or worst case, scenarios.