In 2008, Barack Obama explained his energy policy: “Under my plan of a cap-and-trade system, electricity rates would necessarily skyrocket. Even regardless of what I say about whether coal is good or bad.” He went on to explain, “So, if somebody wants to build a coal plant, they can – it’s just that it will bankrupt them.”

Patriot Coal Company filed for bankruptcy on July 9, 2012 as coal prices have plummeted from reduced demand resulting from low natural gas prices and new regulations from the Environmental Protection Agency (EPA). There are several problems with President Obama’s desire to eliminate coal from our energy system. First, there will be no carbon dioxide savings because the developing world needs to burn coal to grow their economies. And, second, U.S. electricity prices will rise as natural gas price increases along with its demand and as utility companies pass along the cost of meeting EPA regulations. Thus, President Obama and his policies will make U.S. residents suffer from higher energy prices and less diversity of supply with no meaningful decrease in global carbon dioxide emissions.  Since the U.S. has the largest supplies of coal in the world, these policies aim to take one of the principle engines of economic growth off the table for Americans.

Patriot Coal is the first U.S. coal company to file for bankruptcy in many, many years as its shares fell 72 percent to 61 cents. Its shares had traded as high as $24.99 last July. Patriot Coal was spun off from Peabody Energy Corp in 2007. It has 12 active mining complexes in Appalachia and the Illinois Basin with about 1.9 billion tons of proven and probable coal reserves.[i]

Last month, Moody’s Investors Service Inc. changed its outlook of the U.S. coal industry to “negative” because it expects some of the recent declines in coal consumption to be permanent. According to Moody’s, coal power plant demand will decline by 100 million tons by 2020 because of EPA’s regulations. According to Moody’s vice president and senior analyst Anna Zubets-Anderson, “A regulatory environment that puts coal at a disadvantage along with low natural gas prices have led many utilities to increase or accelerate their scheduled coal-plant retirements. In addition, newly proposed U.S. carbon dioxide regulations would effectively prohibit new coal plants by requiring new projects to adopt technology that is not yet economically feasible.”[ii]

According to the Energy Information Administration, coal’s share of the electric generation market fell to 36 percent in the first quarter of this year from 45 percent a year earlier. Further, the Energy Information Administration noted that for the first time since it began collecting data, generation from natural gas-fired plants and coal-fired plants were about equal in April 2012, with each fuel providing 32 percent of total generation.[iii]

Coal’s output plummeted as natural gas prices fell to their lowest level in a decade this year, and the Environmental Protection Agency proposed new rules that would make it practically impossible to build new coal-fired power plants and costly or unfeasible to refurbish existing coal-fired power plants. According to Patriot Coal, these factors along with weaker economies worldwide and the cancellation of customer contracts led to their bankruptcy filing.

The Cost of EPA Regulations

Part of EPA’s strategy is to achieve its goal of bankrupting the coal industry under the guise of new regulations they allege target mercury from coal-fired power plants (the Mercury and Air Toxic Standards). Many call the rule Utility MACT because it requires the “Maximum Achievable Control Technology” for mercury at coal-fired power plants.

EPA’s agenda is made clear when one considers that EPA estimates the annual costs of meeting the Mercury and Air Toxics Standards to be about $10 billion per year while the benefits are estimated at about $6 million per year. The National Economic Research Associates found compliance costs to be more than twice the EPA cost at $21 billion per year and lost jobs amounting to 183,000 per year. These increased costs will be passed to consumers through electricity rates, including businesses who will be forced to reduce jobs. Recent studies project that retail electricity prices will increase between 10 and 20 percent in most of the country and over 20 percent in the coal-dependent states in the Midwest.[iv]

Further, pending greenhouse gas regulations that will take effect after this year’s elections will require all coal plants undergoing major modifications to reduce their greenhouse gas emissions (even though there is no cost effective way to do that), shut down, or convert to natural gas. Because Utility MACT requires most existing coal plants to undergo major modifications, the two rules together will force mass coal plant retirements accomplishing the Obama Administration’s goal of bankrupting coal.  EPA is thus telling utilities that they must modify their coal plants even though the costs far exceed any alleged benefit, and when they do, EPA plans to treat the utilities’ compliance with their irrational order as a justification to require them to meet standards for new plants which specifically preclude the construction of new coal plants.  In one fell swoop, EPA intends to bankrupt the coal industry.

The myths behind the mercury rule justification for killing US coal plants is made more absurd by the fact that U.S. power plants account for only 0.5 percent of all the mercury in the air. And, according to an analysis by Harvard-Smithsonian astrophysicist, Willie Soon, coal plants emit an estimated 41 to 48 tons of mercury per year compared to U.S. forest fires which emit 44 tons per year, cremation of human remains which emit 26 tons, Chinese power plants which emit 400 tons, and natural sources like volcanoes and geysers which emit about 9,000-10,000 tons.

While the Obama administration is trying hard to reduce coal use in the United States, coal use globally is rapidly increasing.  The reason is because coal is the preferred fuel of the developing economies. As the developed world has shifted its manufacturing to the developing world over the past few decades, coal has been the inexpensive energy source that has powered the increase in manufacturing, particularly in Asia. Historically, coal has always been the fuel of choice for industrial revolutions. Most consumer goods are made using electricity in developing world manufacturing centers that are generated by coal. Global coal consumption has increased by over 50 percent in the past decade. According to data from the BP Statistical Review, from 2001 through 2011, global consumption of coal increased by 56 percent, from 2,381 million tonnes of oil equivalent to 3,724 million tonnes of oil equivalent—a trend that shows no sign of slowing down.[v] China increased its coal usage by 9.7 percent from 2010 to 2011 and India increased its coal usage by 9.2 percent over the same period while the United States dropped its coal consumption 4.6 percent.[vi] 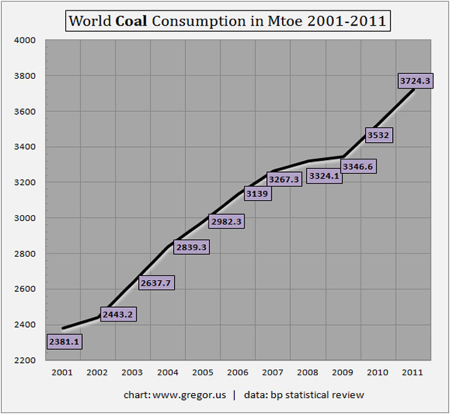 In China and India, two countries with a combined total of 2.5 billion people, coal accounts for over 75 percent and 65 percent of power generation, respectively. Since 2005, the total GDP growth in the United States has been about 5 percent, while China’s GDP has grown 85 percent and India’s 60 percent over the same period. And now both of these nations are building advanced coal power plants to ensure affordable and reliable electricity. By 2015, it is anticipated that almost 50 percent of the world’s most efficient coal power plants will be in China or India.[vii]

China and India are building their economies on coal power 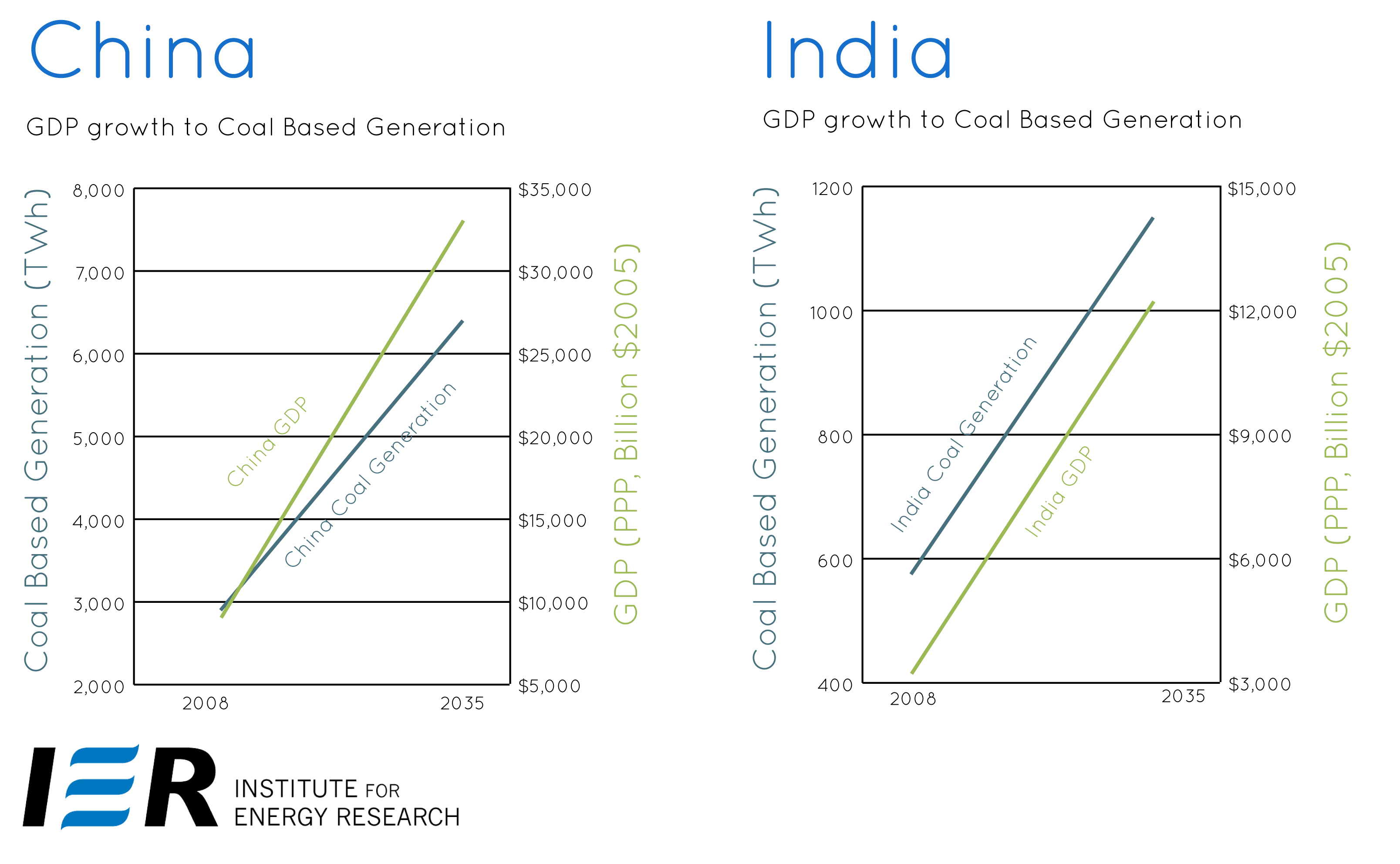 Electricity generation in Developing Asia is founded on coal 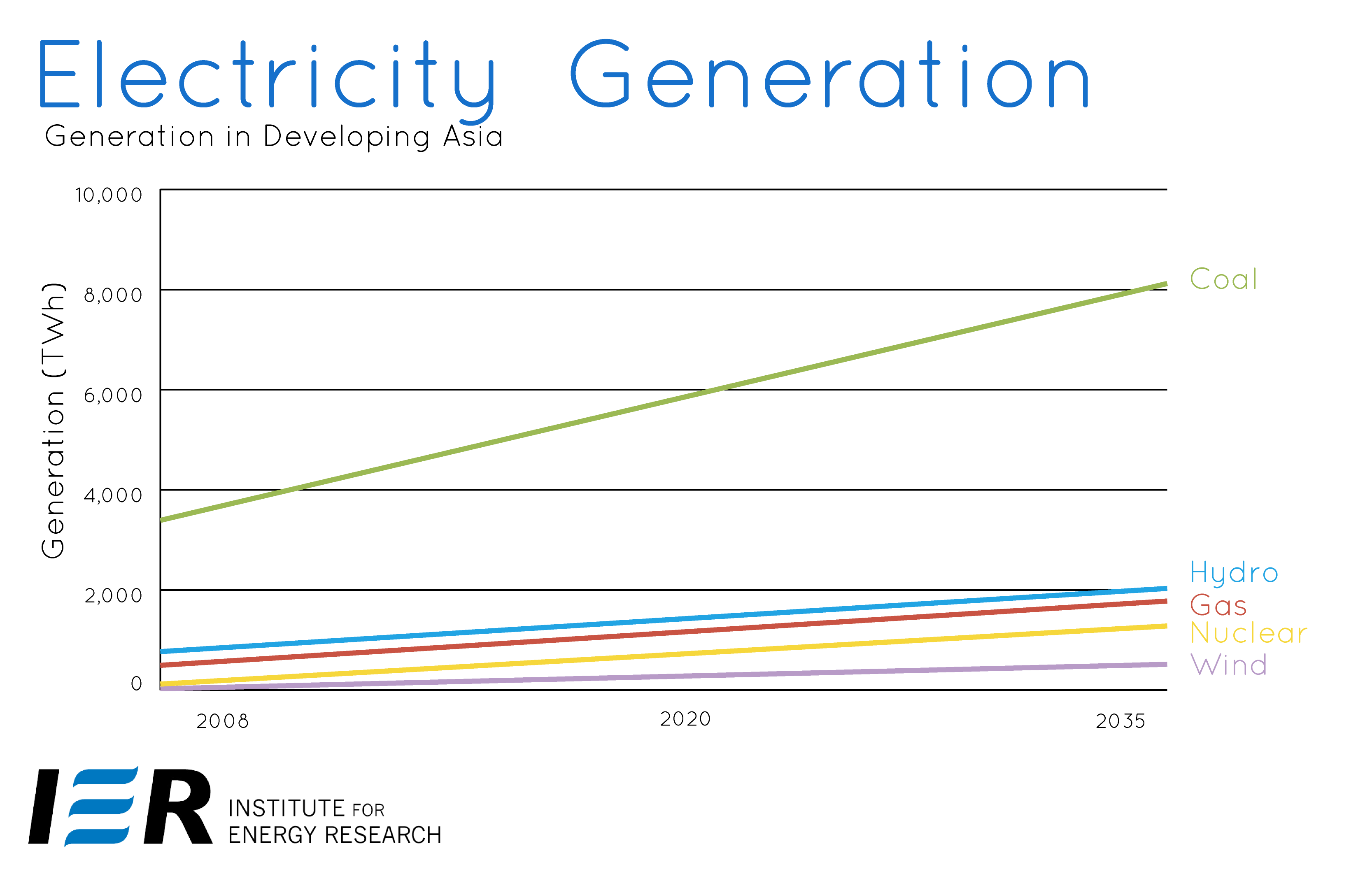 It would take over 1,200 nuclear power stations to replace coal in Developing Asia — three times the current world fleet

Because coal can be stored cheaply and transported via ship, rail, truck, or small personal transport, and because it is inexpensive, especially when burned with fewer environmental regulations, it aligns with developing world wages and makes it a logical energy choice for the developing world. Of course, this places developed countries at a difficult choice between providing the developing world access to affordable electricity or controlling carbon dioxide emissions. The World Bank has been investing heavily in coal-fired power production because of the humanitarian nature of providing the world’s population with affordable electricity. (See chart below.) 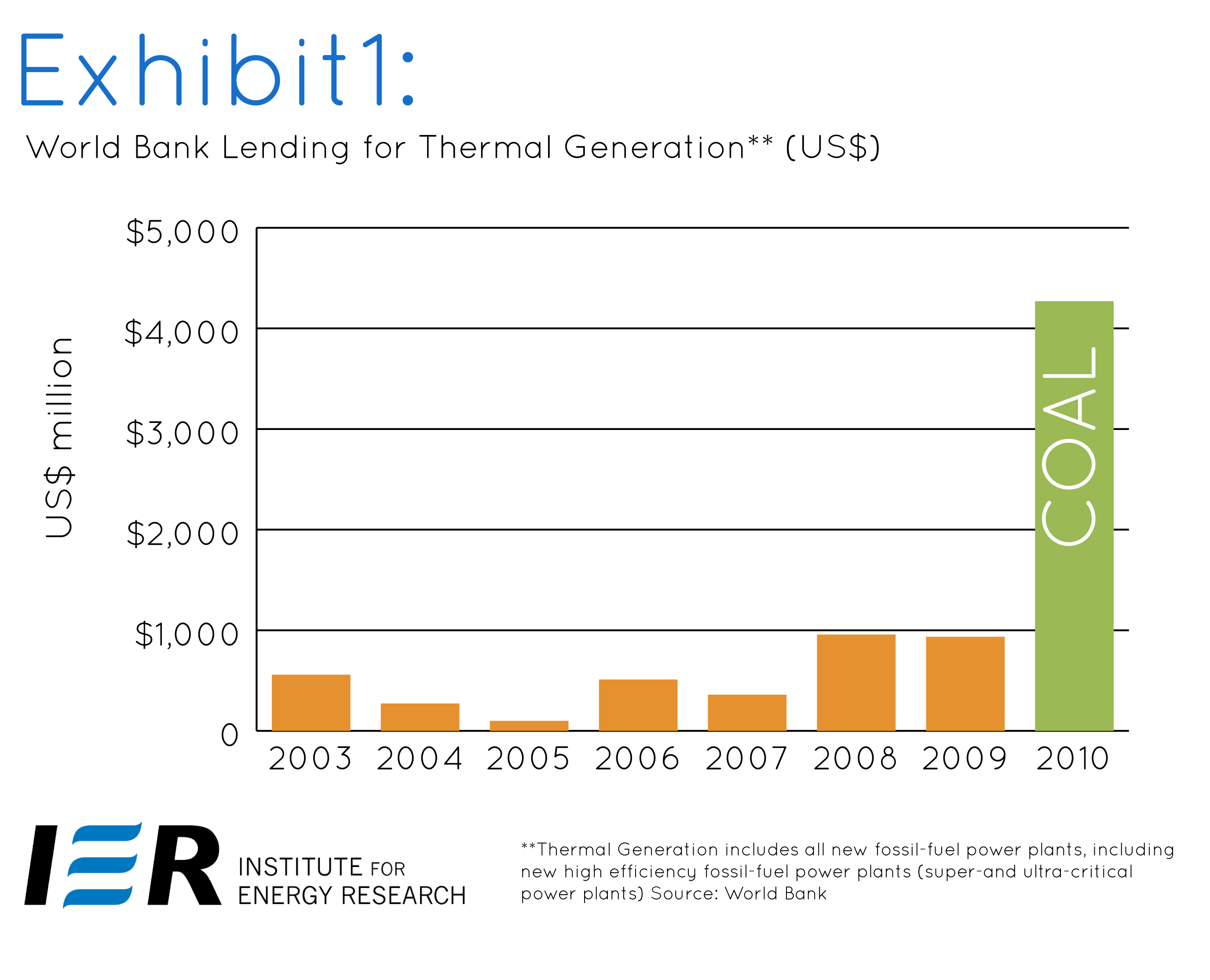 Historically, natural gas has been the most price volatile fuel in America. In 2002, the price of gas to produce electricity reached a low of $2.86 per thousand cubic feet (mcf). But, in 2005, the price of that gas was $11.84 before falling to $5.76 just a few months later in 2006. In 2008, natural gas prices skyrocketed again, to $12.41. Now, in 2012, natural gas for power plant consumption has dropped to around $3.00, but no one knows when the next spike will occur. These volatile prices were largely the result of electric utilities building a large number of natural gas-fired power plants in the early 2000s, raising the price of both natural gas used in other energy sectors and electricity. During this entire period, coal prices remained stable and never exceeded $2.50 per million Btu.[viii] But due to the Obama Administration’s regulations –whether they make sense or not — we will no longer have our fleet of coal-fired power plants to rely on when natural gas prices spike again.

President Obama’s plan for the U.S. coal industry is coming to fruition due to regulations promulgated by his EPA at a time of low natural gas prices. However, it will not work because the developing world is fueling their economies with inexpensive coal, increasing world coal consumption by more than 50 percent over the last decade. Thus, carbon dioxide emissions will continue to grow, but the American people will suffer because of the resulting higher energy costs that the Administration’s policies will produce in the United States.

[vii] Energy-Facts, Locking in the benefits of clean coal: China and India are securing their energy future, July 10, 2012, http://energy-facts.org/?utm_source=Energy+Facts+Weekly&utm_campaign=ad76000558-EnergyFactsWeekly_June_27_2012&utm_medium=email