The Province of Ontario, Canada decided to shutter its coal plants in order to reduce criteria pollutants.[i] According to the Fraser Institute, the environmental benefit of shuttering the coal-fired power plants was minimal and could have been achieved more economically by adding scrubbers to the coal plants rather than closing them.[ii] The political agenda in the province made it impossible to consider other options, resulting in the closure of the last coal-fired power plant in 2014 and making new coal plants illegal despite the knowledge that those plants contributed minimally to emissions of criteria pollutants in the province. Ontario’s achievement from its hasty decision was an increase in electricity prices for its consumers. Despite this outcome, the national Canadian government and other provinces are considering a similar move regarding the country’s coal plants.

While the policy direction that Ontario undertook is different than former President Obama’s “Clean Power Plan”, the result will be similar in that there will be premature closures of coal-fired power plants, higher electricity prices for consumers, and little environmental gain.

The Fraser Institute found that air pollution levels decreased slightly as a result of shutting down the coal plants in Toronto, Hamilton and Ottawa, but not enough to warrant the expense. The most significant closures were the Lambton and Nanticoke coal plants, which represented 25 percent of Ontario’s supply of electricity.[iii] The coal-fired power plants were replaced by natural gas, nuclear power, wind power, and electricity demand reductions.

Between 2003 and 2014, Ontario shuttered 7,546 megawatts of coal-fired capacity and added 13,595 megawatts of new wind, natural gas and nuclear capacity. During that time period, the commodity portion of consumers’ bills increased by 80 percent. It was estimated that eliminating inexpensive coal-fired electricity cost about $5 billion a year.[iv]

The Fraser Institute report examined the impact of closing the coal plants on the level of fine particulates, nitrogen oxides and ground-level ozone in Toronto, Hamilton and Ottawa. The study did not look at greenhouse gases because they are not local air pollutants, and they can be offset globally by purchasing credits elsewhere in the world where the cost may be less to achieve the reduction.

The study determined that the small and, in some cases, statistically insignificant improvements in air quality in a few locations could have been achieved more cheaply with pollution control devices like scrubbers, which would have eliminated 95 percent of the particulate emissions. According to the 2005 Environment Canada Air Pollution Emissions Inventory, residential wood-burning fireplaces, dust from unpaved roads and meat cooking are larger contributors to fine particulate emissions than coal-fired generation.

The Fraser Institute study found that the coal phase-out had no apparent effect on nitrogen oxide levels. However, there was a significant reduction on Ontario ozone levels, which was offset by increased emissions from natural gas power plants that substituted for some of the electricity from the shuttered coal-fired power plants. Per-terawatt, natural gas yields slightly higher net ozone levels.

The study found that the amount of pollution caused by coal-fired plants was not significant enough to be able to obtain the projected benefit in annual health care expenses.[v] According to the study authors, Ontario knew that there would be little net benefit because ample data existed that showed that coal use had little effect on Ontario air quality. Emission inventories from Environment Canada showed that the Ontario power generation sector was responsible for only about

Further, the government claimed that phasing out coal would have a health benefit equivalent to about 10 percent of the health budget. According to the government, coal plant emissions cost the province over $3 billion annually in health-care costs out of a total provincial health-care budget of about $35 billion annually. Thus, the government was attributing almost one-tenth of all health-care spending in the province to illnesses and mortality arising from coal power plants that were responsible for only one percent of annual particulate emissions, which is implausible.

Lesson for the United States

Is the Ontario experience a lesson for the United States?

The “Clean Power Plan” requires a 32 percent reduction in carbon dioxide emissions (from 2005) by 2030 in the electric power sector. Along with the reduction in carbon dioxide emissions, will be reductions in criteria pollutants that the Fraser Institute evaluated when Ontario shuttered its coal plants. The United States has already seen large reductions in criteria pollutants from other EPA programs while both electricity demand and GDP have increased. (See chart below.) Reducing criteria pollutants results in health benefits that EPA estimates to be $55 billion to $93 billion in 2030. But, those health benefits come at a cost. 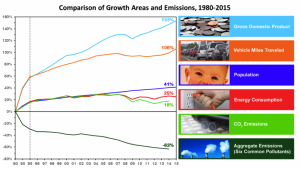 Americans will have to pay much higher electricity prices despite the minuscule benefits of the Clean Power Plan, which reduces global carbon dioxide emissions by less than 1 percent and global temperatures by 0.02 degrees Celsius by 2100, according to EPA’s own models. Even EPA Administrator Gina McCarthy admitted the fact when she told Congress that EPA cannot measure the impact of the proposed Clean Power Plan on global temperatures, because it would likely be incredibly small.[ix]

The province of Ontario, Canada decided to shutter their coal-fired power plants in favor of wind, natural gas, and nuclear power, increasing electricity rates to its customers. The Fraser Institute finds that the net benefit in particulate emission reductions could have been achieved less expensively by adding scrubbers to the coal-fired power plants.

The Obama Administration’s “Clean Power Plant” would also prematurely shutter U.S. coal-fired power plants and replace them with wind, solar, and natural gas-fired power plants, raising electricity prices to U.S. consumers. Before following Ontario’s lead, however, the United States should take a closer look at the issues, which the new Trump Administration has promised to do as soon as Oklahoma Attorney General Scott Pruitt is appointed as the Administrator of the Environmental Protection Agency.

[vi] Fraser Institute, It’s official—Ontario’s coal phase-out was all for nothing, January 17, 2017, https://www.fraserinstitute.org/article/its-official-ontarios-coal-phase-out-was-all-for-nothing

[vii] Levelized costs represent the present value of the total cost of building and operating a generating plant over its financial life, converted to equal annual payments and amortized over expected annual generation from an assumed duty cycle.