Not too long ago, the United States generated roughly 50 percent of its electricity from coal, 20 percent each from nuclear and natural gas, and 10 percent mainly from hydroelectric power and other renewable energy sources. But the electric power energy mix has changed dramatically so that coal now represents less than 40 percent of our electricity production and natural gas represents around 30 percent. So, why is this change an issue? 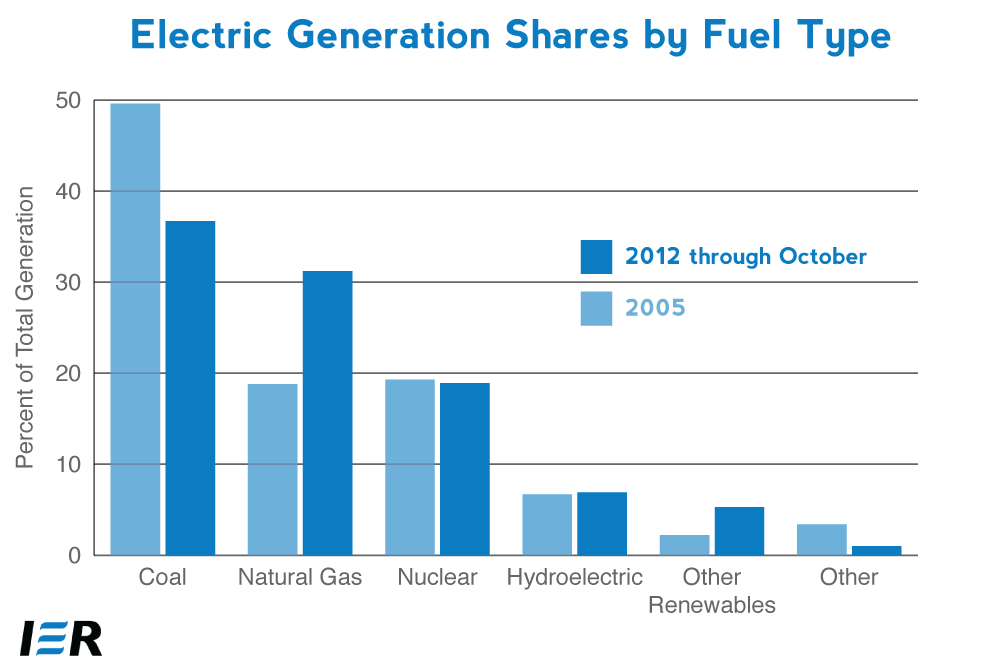 Coal is almost exclusively dedicated as a fuel for electricity generation while natural gas has numerous uses in the United States. As a result, over the last few weeks, New England saw electricity prices skyrocket, increasing four to eight times higher than normal, as the region’s reliance on natural gas for electricity and demand for heating fuel collided due to extremely cold temperatures. Many coal-fired plants in the region have been shuttered or mothballed and cannot be put into service quickly enough to meet spikes in demand. The huge increase in the demand for natural gas increased its price dramatically.

In 2012, natural gas provided 52 percent of New England’s electricity, and that share is expected to grow due to low natural gas costs (when supplies are not stretched due to insufficient pipeline capacity), the inability to build new coal-fired power plants over the last 10 years because of the northeast’s Regional Greenhouse Gas Initiative, and new federal regulations which make running coal-fired units more expensive. As a result, many coal-fired power plants have been shuttered. Lower natural gas fuel costs are also spurring the retirement of nuclear reactors in several parts of the country, including New England.

In a 2010 study, the American Public Power Association warned that natural gas demand is outpacing the delivery capacity of the gas infrastructure. Nearly half of the current delivery capacity was built after the previous peak natural gas demand of 22 trillion cubic feet achieved in 1972. Estimates of new pipeline capacity required range from $106 billion to $163 billion. Further, if all coal-fired generating capacity were to be replaced by natural gas capacity, the cost would be $348 billion.[i]

Due to New England’s large dependence on natural gas for electricity generation and gas’ constrained deliverability, during a cold spell last November, electricity prices rose to $103.20 per megawatt-hour (normally, $30 to $50 per megawatt-hour) and natural gas prices rose to $12.37 per MMBtu (normally, less than $4 per million Btu). Then, on January 24, when temperatures dropped 15 to 20 degrees below average, natural gas prices rose to $31.20 per MMBtu at Algoquin Citygate, an area near Boston where natural gas is traded, resulting in a megawatt-hour price of more than $200.[ii] According to the independent system operator of New England’s electricity market, early in February, a megawatt-hour cost about $150, while a year ago, it was $30—a five-fold increase.[iii] Luckily, New England has been able to import electricity from Indian Point, a nuclear plant on the Hudson River in New York. However, the State of New York is interested in closing the plant.[iv]

It is clear that gas pipeline capacity in New England is inadequate to keep prices steady in times of high home heating demand. Further, it seems that the natural gas market and the electric market mesh poorly because the natural gas generators have not been able to start up when needed in early morning hours. For example, during a storm early in February that knocked out transmission lines, the independent system operator asked some natural gas-fired generators to start-up, but found that they could not obtain the natural gas during the overnight hours.

Fixed costs for nuclear plants run about $90,000 per megawatt compared to about $15,000 per megawatt for new natural gas plants and about $30,000 per megawatt for coal plants. Nuclear plants have high costs due to security and other safeguards, and because they handle radioactive material and operate at high temperatures, their equipment costs are higher than those for other kinds of generating plants. In many areas of the United States, nuclear and coal-fired power plants compete directly with natural-gas fired plants where deregulated markets exist. About 40 percent of nuclear reactors sell power in deregulated markets. Small nuclear plants are less able to compete against low-cost natural gas plants than bigger nuclear units because they make less electricity than the bigger nuclear plants make and thus have less output over which to spread their fixed costs.

Nuclear generation is already showing some signs of weakness with a 2.5 percent decline in output in the first 11 months of 2012 compared with a year earlier. In comparison, generation from natural gas plants increased 24 percent. 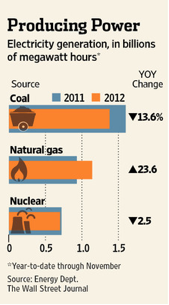 The six states that comprise New England are experiencing vulnerability due to their overreliance on natural gas with electricity prices 4 to 8 times higher when extreme cold or storms hit the region than under normal conditions. That vulnerability is heightened by a shortage of natural gas pipeline capacity that was identified in 2010. Other parts of the country, such as the Midwest, could face similar problems in the future. While increasing the natural gas pipeline infrastructure would help alleviate the problem, diversity of electric generating supply would also help. But, low natural gas prices and excessive regulations are causing the closure of coal-fired and nuclear power plants across the country.  If these plants are closed and replaced with natural gas, the price of electricity will depend increasingly upon hydraulic fracturing, which is under attack from opponents of fossil fuels and under threat of increased regulation by the Obama Administration, despite strict regulation of its practices by those familiar with its application at the state level.

As Jay Apt, executive director of the Electricity Industry Center at the Carnegie Mellon University has stated, “It is certainly true that a region like New England that relies on a single fuel source like natural gas for the bulk of its power does leave itself open for more disruptions than a region with a more diverse fuel mix. It’s not a knock against natural gas; it’s a knock against a single fuel source.”

FACT CHECK: Is the White House Responsible for Production Increases?