The Institute for Energy Research released a study titled, “The Economic Effects of Immediately Opening Federal Lands to Oil, Gas, and Coal Leasing,” by Dr. Joseph Mason, a professor at Louisiana State University and a Senior Fellow at the Wharton School of the University of Pennsylvania. In the study, Dr. Mason assesses the economic benefits of expanding development of oil, gas, and coal resources on federal lands. 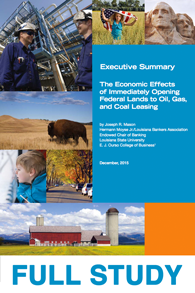 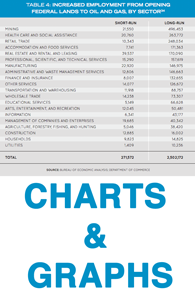 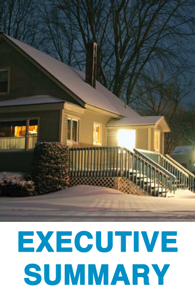 While headlines have reported declining oil, gas, and coal prices, those declines do not deter from the fact that U.S. energy resources are valuable to our domestic economic growth. The most recent government estimate of those benefits was a 2012 Congressional Budget Office (CBO) study, produced at the request of the House Budget Committee, which analyzed federal lease revenues that could be expected to arise from a proposal to open federal lands and waters to oil, gas, and coal extraction.

Specifically, the study aimed to estimate the fiscal benefits of opening areas that are statutorily or as a matter of administration policy prohibited from leasing. The issue has repeatedly been a hot-button political and economic issue in the past several years, having been discussed at the beginning of the Obama administration and then again as Republican challengers in the 2012 election placed opening the lands and waters at the center of their energy policy.

Key findings from the study include:

What is the Solar Investment Tax Credit?