Coal-fired electricity generation is far cleaner today than ever before. The popular misconception that our air quality is getting worse is wrong, as shown by EPA’s air quality data. Modern coal plants, and those retrofitted with modern technologies to reduce pollution, are a success story and are currently providing about 50% of our electricity. Undoubtedly, pollution emissions from coal-fired power plants will continue to fall as technology improves.

America’s improving air quality is an untold success story. Even before Congress passed the Clean Air Act Amendments of 1970, air quality had been improving for decades.[i] And since 1970, the six so-called criteria pollutants have declined significantly, even though the generation of electricity from coal-fired plants has increased by over 180 percent. [ii] (The “criteria pollutants” are carbon monoxide, lead, sulfur dioxide [SO2], nitrogen oxides [NOx], ground-level ozone, and particulate matter [PM]. They are called “criteria” pollutants because the EPA sets the criteria for permissible levels. [iii]) Total SO2 emissions from coal-fired plants were reduced by about 40 percent between 1970 and 2006, and NOx emissions were reduced by almost 50 percent between 1980 and 2006. On an output basis, the percent reduction is even greater, with SO2 emissions (in pounds per megawatt-hour) almost 80 percent lower, and NOx emissions 70 percent lower.

Figure 1 below shows the increases in Gross Domestic Product, vehicle miles traveled, energy consumption, and population since 1980, and it compares them to the decline in the aggregate emissions of criteria pollutants. Today, we produce more energy, drive further, and live more comfortably than we did in the past, all the while enjoying a cleaner environment. 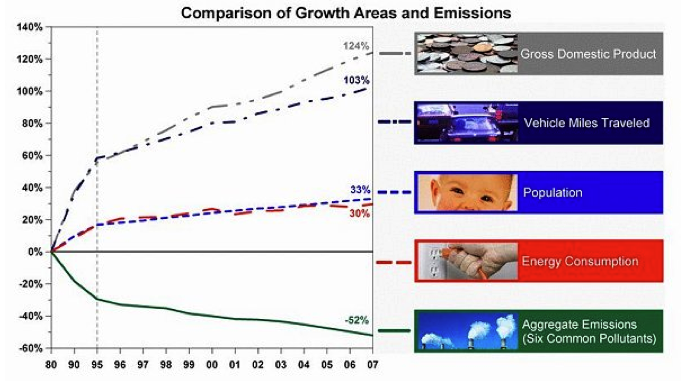 One factor in improving air quality has been the pollution-control technologies used by coal-fired power plants. Today’s coal-fired electricity generating plants produce more power, with less emission of criteria pollutants, than ever before. According to the National Energy Technology Laboratory (NETL), a new pulverized coal plant (operating at lower, “subcritical” temperatures and pressures) reduces the emission of NOx by 86 percent, SO2 by 98 percent, and particulate matter (PM) by 99.8 percent, as compared with a similar plant having no pollution controls [xv]. Undoubtedly, air quality will continue to improve in the future because of improved technology.

Today, coal-fired electricity generation produces nearly half of the electricity generation in America and provides many jobs. For example, Prairie State Energy Campus, a 1,600-megawatt coal plant under construction in southern Illinois, provides 1,200 people with jobs in around-the-clock construction. Between its power plant, coal mine, and other assets, the campus will inject some $2.8 billion into the Illinois economy, creating 2,300 to 2,500 temporary construction jobs and 500 permanent positions, while emitting 80 percent less in pollutants than most existing power plants.[iv] When completed, the power plant will deliver electricity to 2.4 million homes in at least nine states. 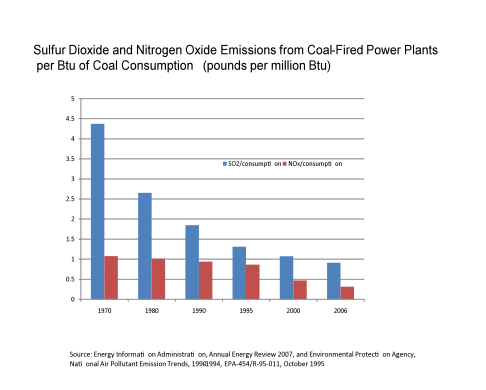 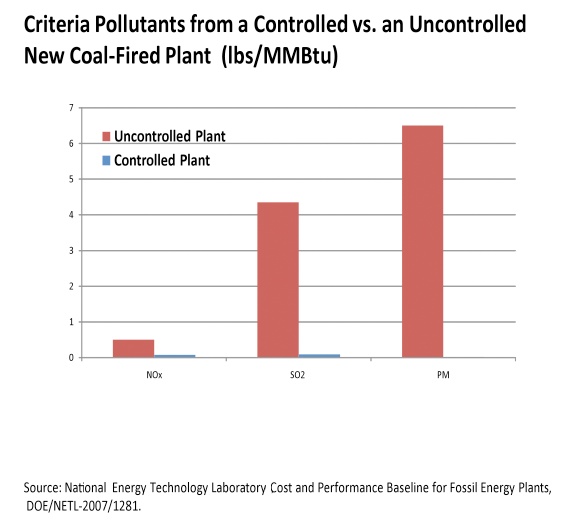 Coal-fired electricity generation is far cleaner today than ever before. The popular misconception that our air quality is getting worse is wrong, as shown by EPA’s data.[xvi] Modern coal plants, and those retrofitted with modern technologies to reduce pollution, are a success story and are currently providing about 50% of our electricity. Undoubtedly, pollution emissions from coal-fired power plants will continue to fall as technology improves.

The results of using a cap-and-trade system to fight “acid rain” have led some to argue that it is a model for efforts to reduce carbon dioxide emissions. But the analogy fails. Stark differences exist between the “acid rain” emission-reduction program and the challenge of reducing carbon dioxide, a natural byproduct of combustion, emitted by natural and man-made sources.

Carbon dioxide is emitted in the U.S. by hundreds of millions of sources, including every personal automobile, the appliances many of us use to cook our food and heat our homes, and the businesses upon which we depend for our livelihoods, to name a few. The “acid rain” emission reduction program was initially limited to 110 site-specific utility plants, and then later expanded to 445 plants.[xvii] In addition, carbon dioxide is a world-wide byproduct of combustion, whereas all criteria pollutants are local or regional. In other words, what the United States did for SO2 and NOx directly affected air quality here, while national action to limit carbon dioxide emissions will have little bearing on aggregate global emissions.

Furthermore, at the time of the SO2 and NOx reduction program, alternative low sulfur coal sources existed and utilities had available affordable and proven technologies to utilities to reduce their emissions. When Congress passed the Clean Air Act Amendments of 1990, therefore, coal-fired utilities could responsibly reduce emissions from their plants using various options that limited cost impacts to the consumer.

In addition, attempts to extrapolate the “acid rain” success story to the challenge of reducing carbon dioxide emissions fail to recognize the history of similar programs in other parts of the world. For example, the “Emissions Trading Scheme” of the European Union has been ineffective at reducing carbon dioxide emissions at the same time it has increased prices and harmed businesses and consumers.[xviii] Further, the EU program has enriched some companies and industries at the expense of consumers.

A recent study by Laurie Williams and Allen Zabel, career employees of the Environmental Protection Agency, makes these points about what the authors call the “Acid Rain Myth.”[xix] As the authors explain, that those who champion the use of cap-and-trade to address global warming ignore the crucial distinctions between the issues we faced in 1990 with acid rain and the issues we face today with global warming.

The following highlights Williams and Zabel’s study demonstrate that the experience of the acid rain program cannot and should not be compared to cap and trade for greenhouse gas emissions:

In short, the mechanisms available to reduce pollutants allowed for more generation of energy with less pollution. But this success cannot be extrapolated to the regulation and reduction of carbon dioxide, a much more challenging undertaking. None of the conditions existing at the time of the apparent success of the SO2 and NOx reduction program apply to carbon dioxide, and, in any case, unilateral action by the United States will have little impact upon global carbon dioxide concentrations. Indeed, the challenges presented by the control and regulation of carbon dioxide have no parallels in the history of emission regulation.

[xix] Keeping Our Eyes on the Wrong Ball, 2/21/09, http://www.carbonfees.org/home/Cap-and-TradeVsCarbonFees.pdf