Coal consumption in the United States is contracting rapidly while in the global economy, it is growing as a fuel of choice.  President Obama presaged this development when he said that under his plans, building a coal plant would not be economically viable. Coal’s share of U.S. electricity is expected to fall to below 40 percent this year from 42 percent last year and produce the lowest share since data was collected in 1949.[i] Just five or six years ago, its share of electricity generation was 50 percent. But those statistics are atypical of how the global economy is treating coal. The BP Statistical Review of World Energy shows coal to be the fastest growing fossil fuel worldwide, garnering a 30 percent share of world supplies in 2011, the highest share since 1969.[ii] 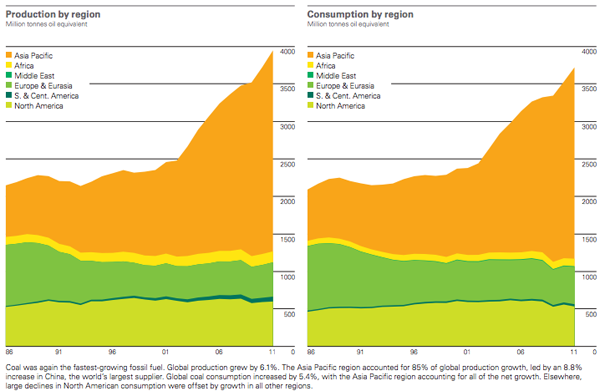 Electric utilities are switching from coal to natural gas due to the low cost of natural gas and excessive regulation by the Environmental Protection Agency (EPA), which is causing the cost of coal-fired generation to increase. Natural gas is expected to produce 29 percent of the country’s electricity this year, up from 21 percent in 2008. The electric utility companies are now tackling how to store growing piles of unused coal, cancelling coal contracts and deferring deliveries. According to the Energy Information Administration, electric utilities are expected to burn 808 million tons of coal this year, a 13 percent decline from last year and the fewest tons since 1992.

In Appalachia, coal mining companies are laying off workers and cutting production even though the United States has the world’s largest coal reserves — more than 200 years at current consumption rates—and is the world’s second largest producer behind China. To keep mines active, coal producers are exporting coal. U.S. coal exports hit a record 107 million short tons last year. The United States has high grade coal used to make steel that is in demand in China, India and Brazil.  These countries are growing and building, even as growth in the United States and in other OECD countries has slowed.

Also affecting coal consumption are rules proposed by the EPA over the past year tightening limits on power-plant emissions. It is estimated that just two of these new rules will force between 32 and 68 of the older coal plants to retire over the next three years as the rules go into effect.

The Electric Power Research Institute found that upgrading all coal plants to meet these new EPA rules would cost the U.S. economy up to $275 billion from 2010 to 2035, or about $11 billion a year. The costs include power plant retrofits, new generation, additional fuel costs and other economy-wide impacts. According to their study, If EPA extended the deadline 2 years more beyond the 2015 deadlines and allowed lower-cost retrofits, the economic impact could be reduced by $100 billion over the 25-year period. The study argues that longer compliance time would relieve cost pressures on builders and installers of scrubbers and other control equipment and would create more opportunity for cheaper control technologies to develop. EPRI expects more than one-third of U.S. coal generators to be affected, forcing 60 gigawatts of capacity to retire or switch fuel sources by 2020.[iv]

The EPA claims that one of their proposed rules will save thousands of lives and save $37 billion to $90 billion each year in health benefits.[v] According to Senator Inhofe, “The truth is that the health benefits EPA claims are exaggerated and misleading. That’s because EPA’s analysis shows that over 99 percent of the benefits from the rule come from reducing fine particulate matter, not air toxics. Of course, fine particulate matter is regulated under the National Ambient Air Quality Standards [NAAQS] program, and in fact 90% of Utility MACT’s purported particulate matter benefits occur in air already deemed safe in the NAAQS program.”[vi]

A worse blow to coal is EPA’s ruling in March when it issued guidelines that would limit greenhouse gas emissions from new power plants as early as 2013. The new rule states that no new power plant can be built unless the power plant emits no more than 1 pound of carbon dioxide per kilowatt-hour. The typical coal-fired power plant emits about 40 percent more than that, while natural gas plants emit slightly less. Once the guidelines go into effect, no coal plants will be built unless electric utilities can develop a cost-effective way to capture carbon dioxide—a technology called Carbon Capture and Sequestration—that is not commercially viable today.  Although EPA denies it is choosing natural gas as its preferred fuel source for electric generation, its proposal blocks construction of new coal plants, the number one source of electric generation in the United States.

Coal has been used in the United States since 1850 and has been the work horse of the electric power sector for decades, generating about 50 percent of our electricity. But, onerous regulations are causing its use to drop substantially. While natural gas remains abundant and inexpensive, it is making the transition away from coal relatively easy. However, once natural gas prices escalate, consumers will see electricity prices soar and will no longer have an inventory of coal-fired plants to provide inexpensive electricity. So President Obama’s prediction in 2008 that “Under my plan of a cap-and-trade system, electricity rates would necessarily skyrocket,”[vii] may certainly be the case—just the vehicle of getting there may be different.  The president suggested the path to his goal was about to change in November, 2010, and so far, it appears to be working.

A New Day For North Dakota: "The Fracking Miracle"