Any time Congress considers subsidizing politically-favored sources of energy, it should consider the following questions:

Surprisingly, these questions came from the Washington Post. As Congress inches closer to a vote on the largest tax increase in American history since World War II, the Washington Post asked these pointed questions in yesterday’s editorial column, displaying a surprising level of understanding concerning the pitfalls of government intervention in the marketplace. The editors opined:

Uncertainties abound: What if the costs of clean coal don’t come down enough to make it economical relative to other measures? If clean coal turns out to be less than its advocates envision, can Congress ever work up the political will to kill the subsidy program? Subsidies are set to phase out after 10 years of paying for operating costs, but won’t powerful coal-state lawmakers fight to keep them going? And even if it does work, won’t members of Congress insist that big carbon repositories not be located in their districts?

But the Post seems to suffer from economic amnesia, as it has argued many times in the past that economic intervention in its pet sources of energy is a necessity. For example, during the debate of the 2007 House energy bill, the Post lamented the lack of a “renewable energy standard”—a mandate forcing Americans to use more renewables. The Post explained:

Also making the House energy package less than optimal is the lack of a renewable energy standard. If the United States is going to ease its dependence on fossil fuels, it must institute a national benchmark for utilities to use more wind, solar, biomass or geothermal energy.

And while there is reason to be concerned about subsidized carbon dioxide capture technology at coal-fired power plants, the verdict has already been issued with respect to renewable energy.

For over 30 years the Federal and State government have been subsidizing renewable energy because of the claims made by proponents of renewables that breakthroughs are just around the corner.

Consider the two headlines from the Wall Street Journal. Thirty years ago the Carter Administration believed that solar power would provide 20% of our energy needs in 2000. In 2008, solar produced less than 0.1 percent of our energy, even though it was heavily subsidized in the interim. 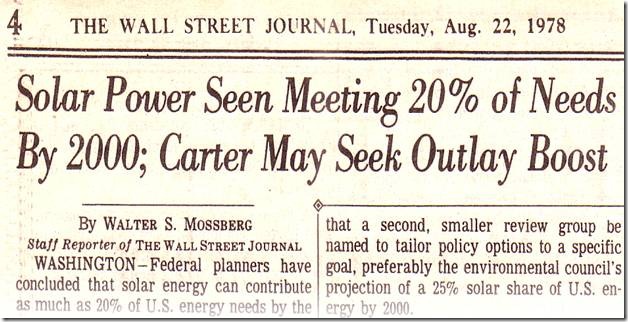 In 2006, the Rand Corporation made a similar claim to the Carter Administration’s claim from 1978—renewable fuels are supposed to be the future.

The Post’s position in 2007 was that subsidies and set-asides for inefficient, but politically-favored sources of energy is a perfectly acceptable intervention in the marketplace. So why the change of heart today for coal subsidies even though the exact same arguments can be made about the seemingly endless stream of taxpayer financed giveaways to the wind and solar industry? The answer is quite simple—the Post does not want coal to be part of the energy mix, even though it is an abundant, reliable and affordable energy source that provides the nation with nearly half of all of its electricity.

When coal is concerned, the Post recognizes how the incentives Members of Congress face lead to troubling results. The Post’s editors should remove their blinders to examine how their concerns about coal subsidies apply equally to the renewable subsidies the Post supports.

The Post should join the Institute for Energy Research and call for an end to all energy subsidies. That would at least make them intellectually consistent. But it appears there is no room for logic and consistency when you have an agenda to advance.

But the Post wants exactly what the proponents of cap-and-trade want and that is to increase the cost of the types of energy they don’t favor (which currently produce 85% of our energy) and force us to use the types of energy they do favor, such as wind and solar (which currently produce 1.3% of our electricity). All Americans will pay more for their energy as a result of their policies, but none of the editorial writers at the Post will be forced to choose between paying the utility bill and saving for their child’s college tuition, or between filling their gas tank and filling a prescription.