Fuel poverty in the United Kingdom is defined to be when a household spends 10 percent or more of median household income on energy for heating, hot water, lights, and appliances. According to official UK government figures, one in five households (5.5 million households) was affected by fuel poverty in 2009.[i] While the 2010 figure is expected to remain the same, the 2011 figure could be as much as one million households higher. Further, predictions indicate that the average UK household could face fuel poverty by 2015.

One of the major factors behind increasing fuel poverty in the UK is government policies instituted to meet carbon stabilization targets, the most aggressive in the world. Britain has a legally binding carbon dioxide reduction target of 80 percent of 1990 levels by 2050. As a result of current measures and increasing fuel prices, industrial electricity prices in the UK are already among the highest of any industrialized country in the world.[ii]

The data show that the majority of households in fuel poverty in the UK contain “vulnerable” individuals, defined by the government as elderly, disabled, the long-term sick, or children. According to Age UK, the UK’s largest charity for older people, almost half the people living in fuel poverty were over 60. Michelle Mitchell, the charity director of Age UK, said: “Research shows many older people are forced to choose between eating and heating their homes, causing illness and in extreme cases, needless deaths.” 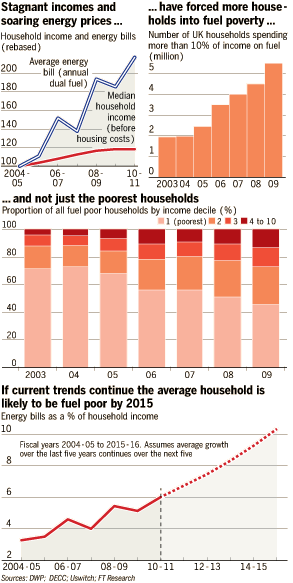 Centrica, which owns British Gas, blamed rising wholesale costs, which increased 30 percent since last winter on higher global demand for natural gas and the impact on supply of unrest in the Arab world. However, government policies also have an effect on the increasing energy costs. Currently, UK “policy costs” add 10 percent to household energy charges, mainly because of the “renewables obligation”, which mandates electric utilities to buy a proportion of their electricity from renewable sources, and the European Union’s carbon trading scheme.

The UK Energy and Infrastructure Plan

The UK government put together a white paper that proposes a plan that will guarantee a fixed price for electricity and include a carbon price floor effective in 2013 that will make it more costly to run coal and natural gas plants. Using these mechanisms, the government plans to change the UK’s energy mix in favor of renewables and nuclear power. EDF Energy, a subsidiary of EDF of France, has plans to build four nuclear reactors in the UK. The UK also has a “renewable energy roadmap” setting a target of building 18 gigawatts of offshore wind generating capacity by 2020, predicated on reducing the cost of wind generation by almost 50 percent (from up to £190 per megawatt hour ($300 per megawatt hour) to £100 per megawatt hour ($158 per megawatt hour)). The UK government is investing £30 million ($47 million) of innovation support to this goal. To deal with the intermittency issue of renewable energy, the plan includes a capacity mechanism that would keep non-renewable power stations on standby to ensure permanent spare capacity. The plan also contains tougher environmental standards for coal-fired power stations, forcing them to add equipment for reducing emissions or close down.[iv]

The country has an official target to spend £200 billion ($316 billion) on new infrastructure by 2020, which includes the large expansion of wind power. The total cost of building power stations is expected to be £110 billion ($174 billion), which will lead to higher household bills. But according to the government, the average electricity bill would increase by £160 ($252) by 2020 under this plan, compared to an increase of £200 ($315) if current practices are continued. The assumptions behind the higher cost number for current practices are not clear, but most likely include the policy changes that lead to more renewables and nuclear power.

Current practices mean more fossil-fueled plants. Dozens of new gas-fired power plants are being planned by energy companies in the UK. Scottish Power wants to construct a 1.2 gigawatt plant at Avonmouth, near Bristol; RWE npower is building a 2 gigawatt gas plant at Pembroke, South Wales and a 2.4 gigawatt plant at Willington in Derbyshire. It is also looking to build a smaller facility at Fawley, near Southampton. Smaller projects for gas-fired power include ones by Welsh Power, which wants to construct an 850 megawatt plant at Fleetwood in Lancashire, and Trafford Peaking Power, which is developing one in Manchester. As many as 30 potential gas projects that are either in late development stage or very early proposals have been identified. Utilities are building natural gas plants because they are relatively cheap to build and quick to construct. But, building those plants could result in a higher carbon emissions levels than the government’s plan that promotes renewable power and nuclear energy.[v]

What the government has not faced up to is that the shale gas revolution has decoupled the prices of oil and gas and is reducing natural gas prices significantly in the countries that have begun shale gas production. Recently, an estimated 200 trillion cubic feet of shale gas was discovered near Blackpool. Shale gas could supply the UK’s energy needs for a century and create an energy industry that would generate revenue and jobs unlike green energy and expensive subsidies. Shale gas could make UK manufacturing more competitive, reduce gas and electricity bills and reverse the rising trend in fuel poverty.[vi]

According to Deutsche Bank, the most effective policy to bring down energy costs would be to abandon the “renewables obligation” and the carbon floor price, cutting bills by 15 percent from 2015 levels. And, an additional 15 percent or more could be cut if the shale gas revolution was encouraged.[vii]

The European Union (EU) study examines how it can meet its target of cutting greenhouse gas emissions to 80 to 95 percent of 1990 levels by 2050 through use of efficiency measures, renewable energy, nuclear power and carbon storage. According to the study, the EU’s green energy campaign could double household electricity bills by 2050. It predicted rising electricity prices over the next 20 years as Europe meets half of its electricity demand from wind farms, which provides 5 percent of its electricity currently. The result will be 50 percent higher bills by 2030 and 100 percent higher bills by 2050.[viii]

Energy costs in the United Kingdom are increasing due to higher fuel prices and government policies. Currently, the UK has over 5.5 million households that are facing fuel poverty, most of which are elderly or disabled. Policies currently in place such as a renewable obligation and a carbon trading scheme have increased prices by 10 percent. The government has a plan that will increase prices further by adding a carbon price floor, a guaranteed price for power, a requirement to ensure standby power to back up intermittent power sources such as wind, and a requirement to either make coal-fired power plants “clean” or retire them. That will increase energy costs further. By 2015, the average household in the UK is expected to be in fuel poverty.