Update on the Impact of EPA’s Utility MACT and Transport Rules:
New Regulations to Take 30 GW of Electricity Generation Offline and the Announcements Keep Coming…

In the months since we released this report, electricity producers have announced another 6 GW of impending plant closures as a result of EPA’s upcoming regulations. To see the updated information, click here for the updated report.

In October, the Institute for Energy Research reported that, according to the Environmental Protection Agency’s (EPA) modeling and announced power plant closures, EPA’s upcoming regulations will shutter almost 28 GW of electricity generation capacity.  At the time, we warned that “this number will grow as plant operators continue to release their EPA compliance plans.”  Now, a mere two months later, our analysis indicates that the amount of generation set to close because of EPA’s regulations has grown to almost 30 GW.

Unfortunately, numerous generators across the country are warning of further retirement announcements.  EPA’s announcement that it has finalized the Mercury and Air Toxics Standards (Utility MACT) will surely be met with a further wave of plant closure announcements in the coming weeks and months as utilities struggle to comply with these burdensome regulations. 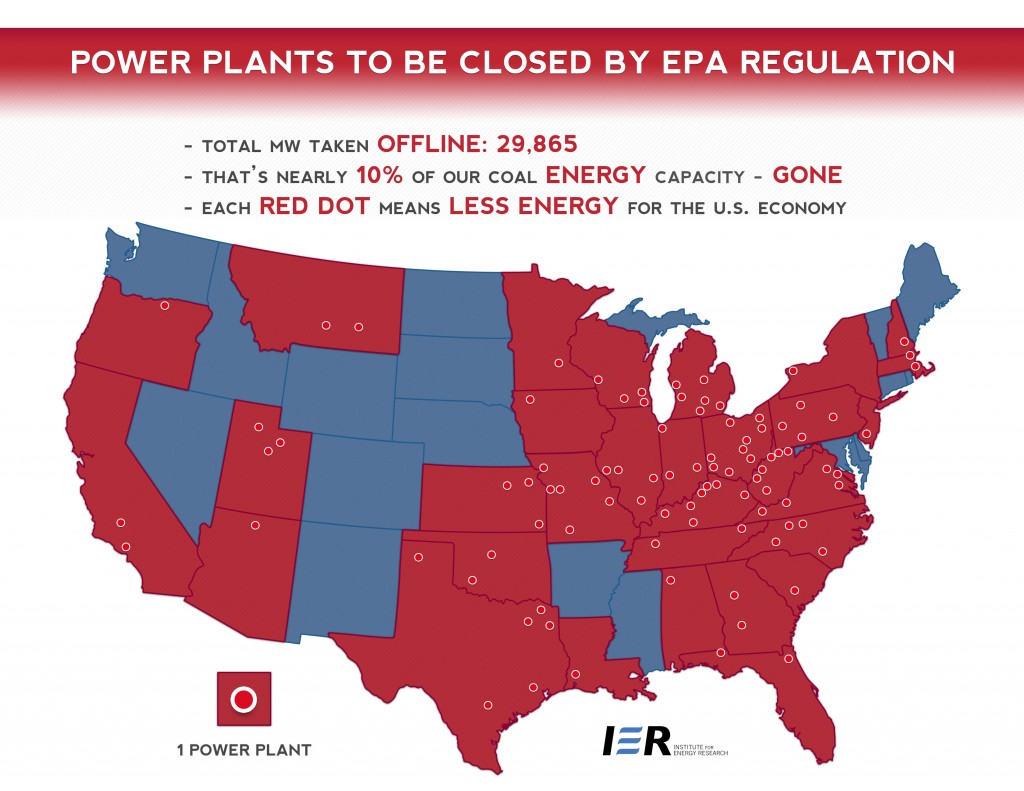 Since Our Report was Released Two Months Ago, Another 1.5 GW of Retirements Due to EPA Regulations Have Been Announced

Operators in Michigan, Wisconsin and Georgia have announced new closures since we first published our closure list two months ago.  Additionally, operators in Minnesota announced they would cease plans to convert a coal plant to natural gas, letting the plant retire due to EPA regulations.  In just two short months, retirements related to EPA regulations have grown by 1.5 GW, over 10% of the total retirements predicted by EPA. 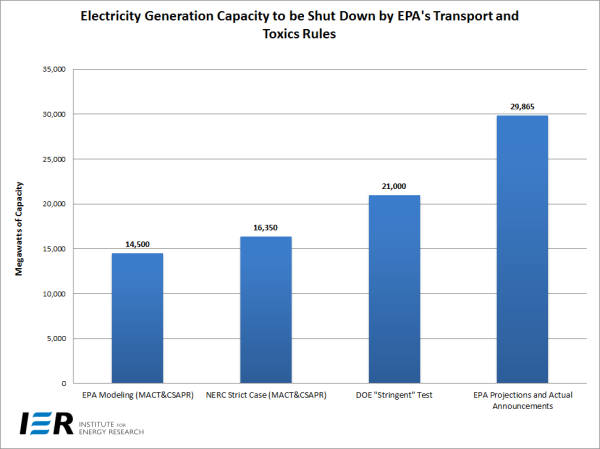 Reality Already Shows that EPA’s Modeling is a Gross Underestimate

According to EPA, their modeling of the MACT rule and Cross State Air Pollution Rule (CSAPR) shows that these regulations will only shutter 14.5 GW of electricity generation capacity. But events in the real world already show how EPA’s model is a gross underestimate. Our analysis combined EPA’s modeling with actual announcements and it shows that, so far, EPA’s regulations will shutter twice as much generating capacity as EPA predicts.

It should be further noted that the North American Reliability Corporation’s (NERC) modeling of the MACT rule and CSAPR estimate that under the worst case, or “strict” scenarios, 16,350 GW of electricity capacity will be closed due to the regulations, and the Department of Energy’s (DOE) “stringent” test shows that only 21 GW of generating capacity will be closed. Even though NERC’s estimate is much lower than what our analysis shows, NERC is concerned that the closures will cause electricity reliability problems. How much greater will the reliability problems be, given that retirements appears to be nearly twice as great as NERC estimates?

The Obama administration’s DOE recently released a study claiming that even under a theoretical “stringent” test, EPA regulations would only close 21 GW of generation.  EPA has since claimed this study proves regulations will not threaten reliability. Our analysis, however, shows that between EPA projections and operator announcements, at least 30 GW of generation will close—almost 9 GW more than DOE’s supposedly ultra-strict test scenario.

In our updated analysis, the vast majority of new announced retirements will occur in Michigan, where operators announced more than 1 GW of closures due to EPA regulations.  The state, already reeling from record high unemployment, has warned that further closures due to the regulations could threaten reliability in both the Upper and Lower Peninsulas.

Here is our updated list of powerplants set to close according to EPA’s modeling and public announcements. The methodology is the same as the previous report.