On the one hand, in the name of jobs, the Obama administration is pushing for the renewal of a wind production tax credit that is expected to expire at the end of this year. On the other hand, the Obama administration is very aggressively regulating coal mining and coal power plants causing jobs to be lost due to new regulations from the Environmental Protection Agency (EPA).

The government’s latest wind energy report touted the strides wind energy made in 2011, and pushed for the continuation of the production tax credit (PTC), noting that it is “mission critical” for the wind industry and the creation of “high-paying American jobs”. President Obama continued the promotion of the PTC on his campaign trail in Iowa[i], where wind power generates 20 percent of the states’ electricity, and in other states. But the Obama Administration refrains from talking about lost coal jobs coming from new EPA regulations on coal mining and coal-fired power plants. The unemployment rate in Boone County, West Virginia, for example, increased from 7 percent to 12 percent over just the past 4 months.[ii]

The Department of Energy released a report on the wind sector’s 2011 activity, indicating that the wind industry added 6.8 gigawatts of new capacity in 2011—32 percent of all new generating capacity in 2011 with an investment of $14 billion. In comparison, natural gas added 49 percent of all new generating capacity. Among the states, California led in new installations and Texas has the most wind capacity, in total. South Dakota and Iowa now produce an average of 20 percent or more of their electricity generation from wind.[iii]

Spurring the wind capacity additions in 2011 was a cash grant from the Treasury of 30 percent of the investment (the so-called Section 1603 program). More than 60 percent of the new wind capacity installed last year elected to take advantage of this program.  In order to qualify for the grant, the wind project must have been under construction by the end of 2011, must apply for the grant by October 1, 2012, and must be in operation by the end of 2012. In lieu of the cash grant, the PTC is available to wind units until the end of this year, and pays owners 2.2 cents per kilowatt hour to produce electricity.

According to the Energy Information Administration, in 2011, wind power generated 119.7 billion kilowatt hours of electricity, 27 percent more than it did in 2010. However, wind power, which is an intermittent power supply generating electricity only when the wind blows, has a much lower capacity factor, (the amount of generation it produces per unit of capacity), than coal-fired or natural gas combined cycle capacity. Thus, it takes more capacity to generate a unit of electricity from wind than it does from coal or natural gas combined cycle capacity because you cannot rely on the wind to blow. One example of this problem occurred in California where wind production helped very little during a period of high electricity use.

According to the American Wind Energy Association, the wind industry employed 75,000 workers, both directly in the industry and indirectly in supporting industries, in 2011—fewer jobs than in 2008 and 2009 but equal to 2010 levels. These jobs include manufacturing, project development, construction turbine installation, operations and maintenance, transportation and logistics, and financial, legal, and consulting services.

President Obama is urging extension of the PTC, saying 37,000 jobs could be lost if the PTC expires.

As mentioned, the tax credit gives wind power generators 2.2 cents for every kilowatt hour they produce for their first ten years of operation. Congress has renewed the credit seven times and let it expire three times since it was enacted in 1992. “We’re at a moment right now when homegrown energy, like wind energy, is creating new jobs all across Iowa and all across the country,” Obama said.  President Obama is falling short in green industry jobs from the White House’s initial target of 200,000 annually. At the end of 2011, just 16,100 new green industry jobs were created, according to Labor Department statistics.[iv]

But homegrown energy is also here in the United States in the form of coal resources, where we have the largest such resource endowment in the world. The Obama Administration’s EPA, however, has promulgated new regulations that will result in the demise of this industry. The new rules target mercury from coal-fired power plants (the Mercury and Air Toxic Standards), which many call Utility MACT because the rule requires “Maximum Achievable Control Technology” for mercury at coal-fired power plants. These technologies must be installed over a tight 3-year period between 2012 and 2015, raising the cost of generating power from existing coal-fired plants where the economics make sense to install the technology, or force those plants to retire or to convert to natural gas.

The National Economic Research Associates found compliance costs to be $21 billion per year and lost jobs to amount to 183,000 per year. Because the increased costs will be passed to consumers through higher electricity rates, businesses will be forced to reduce jobs as well. Studies project that retail electricity prices will increase between 10 and 20 percent in most of the country and over 20 percent in the coal-dependent states in the Midwest.[v]

Further, pending greenhouse gas regulations that are to take effect after this year’s elections will require all coal-fired plants undergoing major modifications to reduce their greenhouse gas emissions (even though there is no cost effective way to do so), shut down, or convert to natural gas. New coal-fired plants are essentially banned because the technology does not exist commercially for them to meet natural gas carbon dioxide levels that are required by the EPA regulation. Because Utility MACT requires most existing coal plants to undergo major modifications, the two rules together will force mass coal plant retirements, causing unemployment at coal-fired power plants and coal mines.

According to a report from the United Mine Workers of America, job losses associated with the closure of EPA-targeted coal units could be signifi­cant, amounting to more than 50,000 direct jobs in the coal, utility and rail industries, and an indirect job loss fi­gure exceeding 250,000. 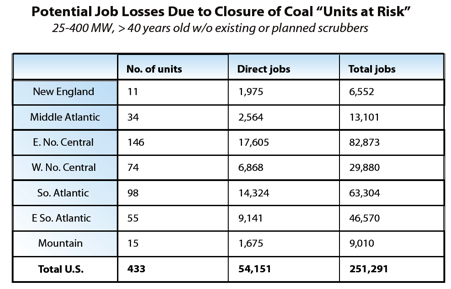 Layoffs are already occurring at some mines as a result of coal-fired generation’s declining share of electricity production, mostly to natural gas-fired generation. Major declines in coal miner employment tend to lag demand by 3 to 6 months because of coal inventories. Since March, there have been reports in the news media that planned layoffs in West Virginia total 600, and in Kentucky, 900, for example.[vi]

Arguments against the PTC

First, subsidies such as the PTC create a dependence on government, by removing the incentive for companies to make their technologies cost-competitive. Without the subsidy, companies can determine at what price the technology would enter the market place and work towards the economics to achieve it.

Second, the PTC provides the wrong incentives for wind to truly be competitive in the long run. The PTC, as its name states, awards a subsidy for each kilowatt hour of electricity produced. The problem is that the production of electricity is much more valuable when demand is high, rather than when demand is low. The PTC, however, awards the same subsidy for production anytime and it turns out that wind frequently blows the strongest during the night when electricity is worth the least. The PTC only gives incentives for production instead of production when it really matters.

Third, if the project is a winner, subsidies waste taxpayers’ money by funding projects that the private sector should fund and would fund if the project were economic, thereby offsetting part of the projects’ cost with government funds. And, if the project is a loser, the government is directly wasting taxpayers’ money by subsidizing it, such as the case with Solyndra. Because investors have more expertise and knowledge than government bureaucrats in making these decisions, they, rather than the government, should be making them. Tax credits for wind energy producers are estimated to cost the federal government, and thus taxpayers, $1.6 billion, in this year alone.[vii]

Fourth, government-funded programs seldom create jobs. Rather, they shift jobs from one sector of the economy to another. The opportunity cost is the lost labor and capital from the other sectors of the economy that do not receive government support.

Fifth, subsidies promote crony capitalism by encouraging industries that benefit to spend more money lobbying for government handouts.[viii]  If a company’s business model requires a guaranteed subsidy from the government, the company will dedicate whatever resources are necessary to ensure that such subsidies continue.

The Obama Administration is choosing technologies and companies it wants to help, not having learned from its experience with Solyndra and other poor investments. It wants taxpayers’ hard-earned dollars to be spent on companies and technologies that should enter the market place based on their own economics. And, it is doing so without due regard for the importance of our own world’s largest natural resources (e.g. coal), wanting to bankrupt that industry, potentially destroying many more jobs than the wind industry would promote. President Obama would do better taking lessons from President Reagan. President Reagan indicated that America was an “energy-rich” nation that needed to focus on producing more of it rather than taxing and regulating it.