In the climate change policy debate, the latest news is the carbon tax bill (H.R. 6463) introduced by Florida Republican Rep. Carlos Curbelo, which would levy an initial $24 per ton tax on carbon in the year 2020, and would rise 2% (plus inflation) annually thereafter. The episode underscores the warnings I have been giving conservatives and libertarians over the years, who are being courted to support an ostensibly “pro-growth” carbon tax deal. For example, the Curbelo bill doesn’t even pretend to be revenue neutral; it literally establishes a new “trust fund” to spend hundreds of billions of dollars on infrastructure and other projects.

Moreover, even on its own terms, the Curbelo proposal doesn’t solve the ostensible climate change problem—as critics on the left have already pointed out. As a post on our sister website explains, neutral analyses confirm that the Curbelo bill would raise energy prices for Americans while doing little to slow global emissions. There are also dubious provisions in this specific bill (such as contingencies for higher tax rates), which I will document below. Conservatives and libertarians should be wary of tax hikes on energy in order to expand government spending, even if they have “Market Choice” in the title.

Problems With Framing and Rhetoric

The official title of Curbelo’s bill would make George Orwell proud. The long title is “Modernizing America with Rebuilding to Kickstart the Economy of the Twenty-first Century with a Historic Infrastructure-Centered Expansion Act,’’ but the bill also gives us the snappier alternative title of ‘‘MARKET CHOICE Act.”

On the face of it, this is absurd. The bill contains specific tax rates by year for carbon dioxide emissions, but it also contains specific targets of emissions by year (as I will explain below). Furthermore, most of the revenue will not be returned to citizens via dividends or other tax reductions, but instead will be spent through the political process. There are lots of ways to accurately describe a central plan from Washington, D.C., that sets a schedule for national emissions, establishes a “National Climate Commission” (!), and raises taxes some $60 billion in the first year alone…but “Market Choice Act” isn’t one of them.

And what do Republicans get for this move? Are they warmly embraced by people on the Left? Of course not. The NRDC, a PhD leader of a climate non-profit writing in the Huffington Post, and Vox’s resident climate policy expert all criticize the Curbelo proposal as too weak; a ThinkProgress piece reports that many view the Curbelo bill’s concessions on EPA as “unacceptable.”

Note that the above links are to the more mainstream outlets of progressive opinion. The Executive Director of “Food & Water Watch” was more aggressive, issuing a statement saying that Curbelo’s bill “would gut environmental protections aimed at curtailing emissions, like the Clean Air Act, and would leave fossil fuel interests free to pay to pollute instead.” The statement went on to say—using an argument that ironically could have come from a right-wing think tank—that “British Columbia’s failed attempt at carbon pricing didn’t result in any emissions reductions, leaving everyday people to bear increased energy and transportation costs.”

The fundamental problem here is that the people who are most concerned about the dangers of climate change believe only draconian measures will solve the ostensible problem. Therefore, in their minds any carbon tax that is remotely politically feasible will not be an answer.

To understand just how big the divide is, consider Vox’s David Roberts’ response to the Curbelo bill. In his article, Roberts reviewed a Rhodium Group study that analyzed three different carbon taxes, the most aggressive of which started the tax at $73 per ton, and raised it 1.5% annually thereafter. Even though this is more than triple the starting level of Curbelo’s tax, Roberts informs his readers that

none of the taxes considered are likely to achieve the long-term US emission goal of 80 percent below 2005 levels by 2050 (a target we now realize is woefully insufficient) “absent complementary GHG policies, significant improvements in technologies that can act as direct substitutes for fossil fuels, and/or significantly faster electrification of the transportation, buildings, and industrial sectors than we considered in this analysis.” [David Roberts, in turn quoting from a study by Rhodium Group.]

And so we see that at least as far as Vox’s featured climate policy expert is concerned, even a $73 per ton carbon tax would fail to achieve a reduction target that itself is “woefully insufficient.” This is why Roberts never agreed with the idea of enacting a carbon tax and getting rid of other regulations (which is the bait offered to libertarians and conservatives), even in principle. Roberts has consistently maintained over the years that a “market solution” like a carbon tax at best should supplement other government initiatives, including direct regulations and heavy investment in alternative technologies.

Popular media report the Curbelo bill as enacting a $24 per ton tax that rises 2% annually (after an adjustment based on the CPI). However, soon into the bill we read:

‘‘(3) RATE ADJUSTMENT BASED ON EMISSION LEVELS.—

(A) REPORT.—Not later than March 30, 2021, and annually thereafter, the Secretary

‘‘(i) The total emissions through calendar year 2020 are 5,177 million metric tons of carbon dioxide equivalent.

And so on. What happens if emissions exceed these thresholds? In that case:

The “every second calendar year” clause is confusing, but since the bill gives emissions targets for each year, it seems that it allows for a $2 per ton hike annually; that is how others have interpreted it.

Another crucial ambiguity in the procedure is whether the (potential) $2 per ton penalty is “rolled into” the formula of 2% growth and another (potential) $2 penalty in the next year. The table below shows how fast the Curbelo tax could grow, if actual emissions exceeded the targets each year: 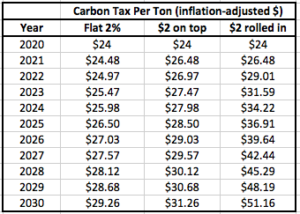 In the table above, the first column (“Flat 2%”) shows what happens if the initial $24 per ton Curbelo tax grows at a real (i.e. inflation-adjusted) 2% rate per year. In the second column (“$2 on top”), I’ve simply added $2 to the values in the first column, showing what happens if the extra $2 penalty because of emissions is merely tacked onto the baseline schedule.

However, in the last column, I show what theoretically could be the fastest growth of the Curbelo tax, if we assume each year the tax rate is calculated by increasing the previous year’s rate by 2% and then adding an additional $2. Under this interpretation, we see that if the economy’s emissions should miss the target every year, then the initial $24 per ton tax could exceed $51 by 2030—and remember, here we aren’t even factoring in price inflation. The actual dollar figure of the tax would be higher still in 2030, because of the weakening dollar.

These potential federal carbon tax rates are even more onerous when we consider that they would eventually supplement state-level carbon taxes. Section 9905 of the Curbelo bill grants federal tax credits for state-based payments, but these phase out at the rate of 20 percentage points per year, so that by the fifth year following enactment, a taxed entity will be responsible both for the full carbon-tax liability under federal law, plus whatever the entity may owe in state-level taxes and fees.

I’ve already quoted left-leaning groups above who reject Curbelo’s plan because of its ostensible rollback of environmental regulations. It’s true that the bill does call for eliminating the federal gas tax—though the net tax on gasoline would still be higher—and it has language temporarily limiting the enforcement of the Clean Air Act. But note the specific language:

…after a fossil fuel has passed through a point of taxation…the Administrator shall not finalize or enforce any rule limiting the emission of greenhouse gases from the combustion of that fuel under this Act (or impose any requirement on any State to limit such emission) on the basis of the emission’s greenhouse gas effects. [Curbelo bill, bold added.]

Perhaps a Trump Administration would interpret this clause in the commonsense fashion, meaning that all regulations on greenhouse gas emissions emanating from the Clean Air Act would be suspended, since the whole point of a carbon tax is to “internalize the externality” and substitute a “market system” in place of top-down command-and-control.

However, let me remind everyone that under the Obama Administration, a large portion of the official net benefits of the so-called “Clean Power Plan” was not based on the “social cost of carbon.” Here’s the relevant table from the final Regulatory Impact Analysis: 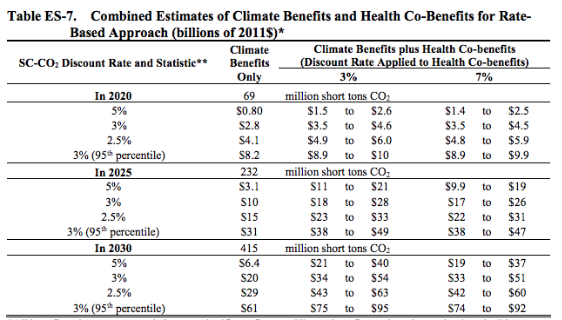 Source: 2015 RIA for Clean Power Plan Final RuleIn the table above, consider for example the year 2030, using a discount rate of 3%. The analysis estimated $20 billion worth of “climate benefits only,” but a range of $34 billion – $54 billion in “climate benefits plus health co-benefits.” That means at the high end of that range, the Obama Administration was suggesting that more than half of the total benefits from the regulations on coal-fired power plants were coming from alleged benefits other than mitigated climate change. (Instead, they were coming from alleged health benefits related to reductions in particulate matter, etc.)

The point is, even on its own terms, the Curbelo bill wouldn’t knock out something like the Clean Power Plan. Future Administrations could plausibly continue with its enforcement, arguing that the co-benefits alone justified the measures.

Furthermore, before libertarians and conservatives get excited about a “deal” in which they hold their noses and accept a carbon tax, in order to get rid of all those silly top-down regulations…here’s what the Curbelo bill says a few paragraphs after the discussion on an enforcement moratorium:

‘‘(5) Notwithstanding section 330(a), the Administrator may—

To put it into plain English, this is saying, “Even though we just said this new carbon tax should replace greenhouse-gas-specific regulations under the Clean Air Act, none of that applies to regulations on new motor vehicles or their engines. We will maintain climate-change-motivated regulations on cars, even though gasoline is now being taxed specifically to fight climate change.”

Besides the above concerns, there are other elements in the Curbelo bill that should alarm skeptics of federal overreach, such as provisions to allow officials to add products and even entire industries to the list of taxed entities, so long as certain emissions criteria are met. There is also an entire section on the creation of a “National Climate Commission,” which hardly smacks of limited government.

For years now, conservatives and libertarians have been told they should support a compromise carbon tax, in exchange for offsetting tax cuts and elimination of inefficient top-down climate regulations. The Curbelo plan fails on both counts: it proudly announces that it will use the revenues to expand government spending, and it has huge loopholes to allow existing regulations to remain in force, on top of the new carbon tax.

Conservatives and libertarians should consider the Curbelo bill with eyes wide open. To add insult to injury, it doesn’t even address the ostensible climate change problem, which is why it has harsh critics on the Left as well.