Petroleum and natural gas are the most-consumed sources of energy in the United States through 2050, according to the Energy Information Administration’s (EIA) Annual Energy Outlook 2022 (AEO). Petroleum and other liquids are expected to remain the most-consumed fuel sources through 2050 with the transportation sector consuming the majority, particularly motor gasoline and diesel. Consumption of natural gas is expected to continue to grow as well over this period, maintaining the second-largest share of all fuel sources, driven by expectations that natural gas prices will remain lower than historical levels. EIA expects that energy consumption will increase in the United States over the next 30 years as population and economic growth, whose annual growth rate is forecast at 2.2 percent, outpace energy efficiency gains. EIA assumes that existing laws and regulations in effect as of November 2021 are in force when forecasting future energy supply and demand in its AEO, including the Bipartisan Infrastructure Bill. 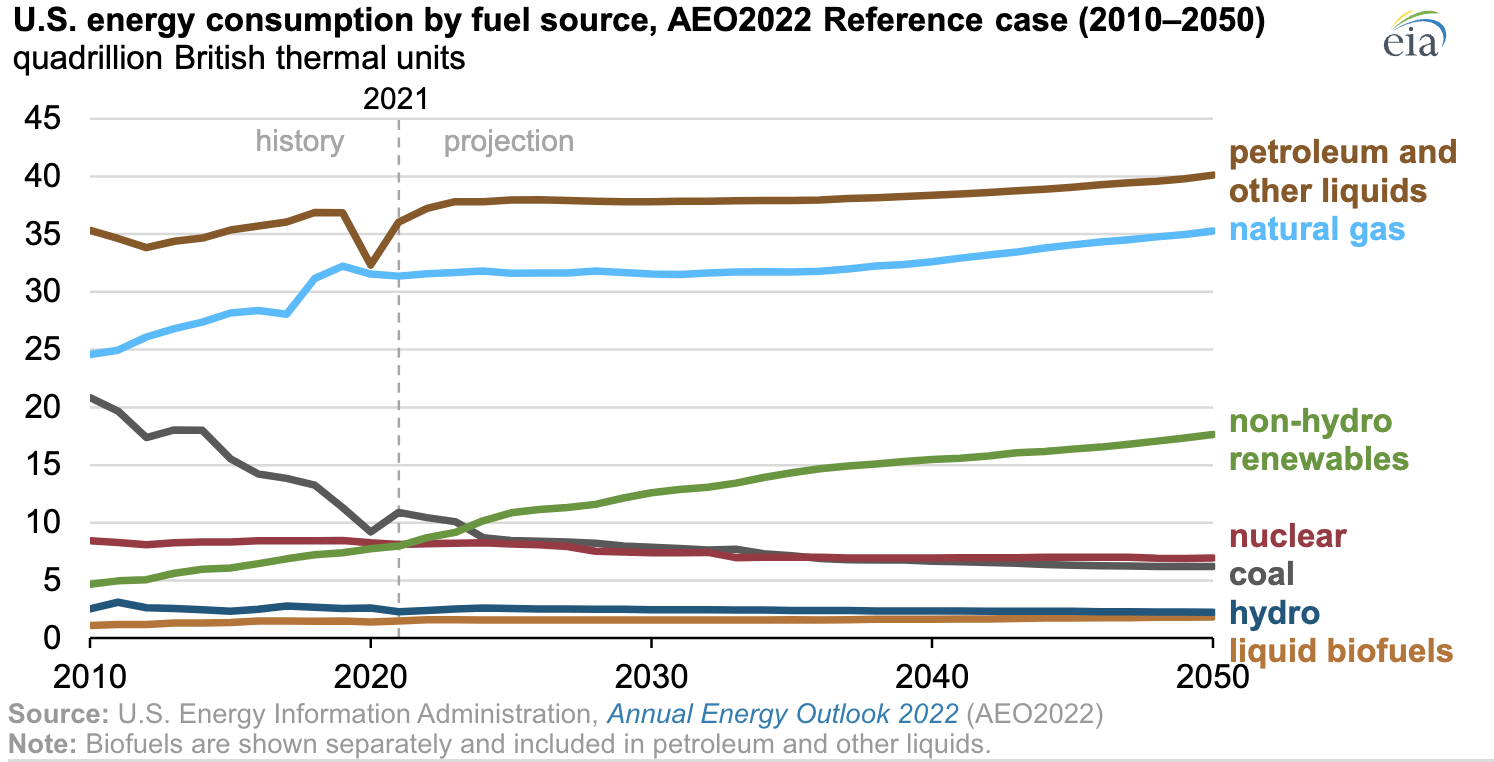 Electricity demand is expected to grow slowly across the projection period, which increases competition among fuels. The average annual growth rate of electricity consumption surpasses 1 percent in AEO 2022, but not until near the end of the projection period. EIA forecasts that onsite generation of electricity will expand significantly in the United States in the residential, commercial, and industrial sectors, reducing growth in electricity purchased from centralized generators. Residential, commercial, and industrial sector onsite solar PV systems are expected to account for more than 8 percent of total electricity generation by 2050–—almost double the share held by onsite power generators in 2021.

The demand for electricity in the transportation sector is expected to be less than 3 percent of economy-wide electricity consumption in 2050. Fully electric vehicles grow from less than 1 percent of the on-road light duty vehicle fleet in 2021 to a little over 7 percent in 2050. The increase in demand primarily follows evolutionary electric vehicle technology and market developments, as well as current fuel economy regulations. Both vehicle sales and utilization (miles driven) would need to increase substantially for electric vehicles to raise electric power demand growth rates by more than a fraction of a percentage point per year.

EIA assumes that federal and state incentives and declining technology costs will support an increasing share for wind and solar power over the next 30 years. These intermittent renewables compete with natural gas for electricity generation market share, while the shares of coal and nuclear power decrease in the U.S. electricity mix, falling to 10 percent and 12 percent, respectively, in 2050. State and federal policies provide significant incentives to invest in renewable resources for electricity generation and transportation fuels. Assumed new technologies are expected to drive down the cost of wind and solar generators, further increasing their competitiveness in the electricity market, even as assumed policy effects lessen over time.

Fossil fuels are still expected to provide 74 percent of U.S. total energy needs in 2050 in EIA’s AEO 2020, just 5 percentage points less than today, despite President Biden’s goals. That means that EIA believes that renewable energy, excluding hydroelectricity, will supply just 16 percent of U.S. energy needs in 2050 based on current laws and regulations from their 10 percent share today.