Natural gas production in the United States is hitting unprecedented highs, storage tanks are filling, and prices are falling to levels not seen in a decade. American consumers are benefiting from the glut while gas producers are looking toward oil to keep profits from plunging for their stockholders. This leap in natural gas production is caused by American ingenuity applying hydraulic fracturing and horizontal drilling technology to natural gas previously locked in shale formations. Hydraulic fracturing uses water, sand and trace amounts of chemicals to break open shale rock and release natural gas and oil deposits that could not be produced economically with conventional drilling methods.  Private industry in the U.S. has, literally, drilled our way to lower natural gas prices, and these lower prices have ignited a new flurry of new proposals for the use of abundant, affordable natural gas supplies.

Lower natural gas prices are bringing industry back into the United States for at least two reasons. First, lower natural gas prices reduce energy costs for large industrial users and increase their competitiveness with the rest of the world.  Second, chemical companies use natural gas as a feedstock to make petrochemicals, compounds including plastics and fertilizer.  Huntsman Corporation, the world’s largest maker of textile dyes, plans to expand chemical production in the United States and may relocate capacity from other countries to take advantage of the low domestic natural gas prices. Dow Chemical Company and Methanex Corporation are also expanding U.S. production due to low natural gas prices. Dow plans to spend $4 billion to increase production of chemicals such as ethylene and propylene in Texas and Louisiana and Methanex plans to move a Chilean methanol plant to Louisiana.[vi]

While many companies plan to use more natural gas in the future, consumption is lagging natural gas production. The production increases along with a mild winter has left the United States with more natural gas than it can consume, filling up storage facilities. Natural gas supplies are 61 percent higher than the five-year average. At the end of winter, there is usually about 1.5 trillion cubic feet of gas in storage, but this year, there is 2.5 trillion cubic feet in storage because less was withdrawn for heating due to the mild weather. Storage facilities (underground salt caverns and depleted oil and gas fields) are now at 57.8 percent of capacity with expectations that they will fill by the end of October. The peak storage capacity level historically (98.7 percent) was hit for a short period of time in 2009 before winter usage drew down supplies.[vii] 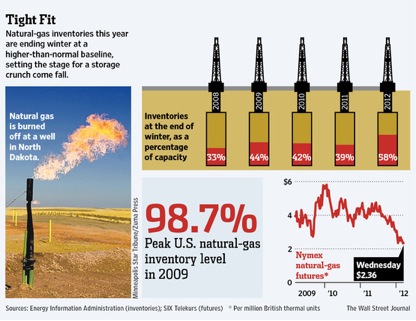 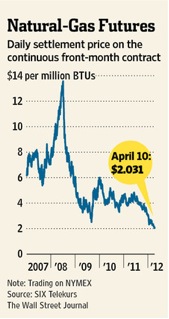 As the price of natural gas has plummeted, consumers have benefited from lower electricity rates and the lower cost of manufacturing, creating thousands of jobs. In February, Boston-based utility NSTAR announced to its business customers that it will reduce their retail electricity rates this spring by 34 percent, to 5.5 cents a kilowatt-hour down from 8.5 cents. In May, the company expects to announce rate reductions for residential customers. According to the Energy Information Administration, in New England, wholesale power prices are about half their traditional levels.  In February, for example, wholesale power prices in New England were often in the three to four cent range, compared with six to eight cents on average for that month between 2006 and 2011. [ix]

All of the natural gas production and high inventories mean that people are now exploring less for natural gas than just a few years ago. According to energy services company Baker Hughes, the number of drilling rigs exploring for natural gas has fallen by 30 percent since October to 658. Despite this drop off in drilling rigs, natural gas production is still increasing due mainly to the five-year natural gas drilling boom. Drilling is down in the Haynesville Shale in Northwestern Louisiana and East Texas and the Fayetteville Shale in Central Arkansas. The rigs and associated jobs, however, have been reassigned to oil fields, where prices are high, recently averaging more than $100 per barrel. The oil rig count in the United States is at a 25-year high. Since drilling for oil generally produces natural gas as a byproduct, natural gas in storage is still likely to increase.[x]

One option being considered to deal with high natural gas inventories and low prices is to export more natural gas. Under current law, the federal government must approve gas sales to countries with which the United States has free trade agreements, such as Canada, Mexico and South Korea. For other countries, the government must grant approval unless it finds that “such action is not consistent with the public interest.” Recently, the Energy Department approved the export of 2.2 billion cubic feet a day of liquefied natural gas from a facility in Louisiana that was originally intended to take in imports and is considering applications from seven other companies. If all the applications are approved, exports of natural gas from the United States could reach almost a fifth of current consumption.[xi]

The benefits of expanded natural gas exports would include a reduction in the U.S. trade deficit, more American jobs, and increased revenues from taxes and fees on production.  A reduction in the trade deficit would mean that the United States would have less need to borrow from its Asian trading partners. The added production resulting from exporting natural gas would create jobs. Taxes and other fees on gas production help state and local governments get needed revenues to balance their budgets.[xii]

Policymakers, including President Obama, are using the large new supplies of natural gas as an excuse to justify picking winners and losers—this time in natural gas markets. Some in Congress are working on legislation called the New Alternative Transportation to Give Americans Solutions Act of 2011, or Nat Gas Act, which would provide tax breaks and financial incentives for the natural gas industry, and for companies and municipalities that convert trucks and buses to natural gas. The bill provides infrastructure credits for installing fueling stations and tax credits good for up to $7,500 for passenger trucks and $64,000 for commercial trucks that run on natural gas fuels. This proposed legislation would provide about $5 billion in new handouts to the natural gas industry, but would not expand natural gas exploration.[xiii]

One of the most prominent companies that stand to benefit from this proposed legislation is Clean Energy Fuels, a company founded by T. Boone Pickens. Some estimate that Clean Energy Fuels could receive tens of millions of dollars from the legislation’s passage. Another company that stands to profit is Westport Innovations, a provider of technology that allows engines to operate on clean-burning fuels, of which billionaire investor George Soros owns more than 3 million shares.[xiv]

In actuality, there is no reason for the government to dictate terms for the expansion of natural gas as a transportation fuel; free markets are already doing so.  Recently, Chrysler and GM announced the addition to their truck lines of dual-fuel vehicles which can run on either gasoline or compressed natural gas.  They are doing so because of perceived consumer demand, rather than political demands and directed industrial or transportation policies.  With natural gas currently at the equivalent of about $12 per barrel, consumers will pursue their own best interests as they perceive them, rather than await the centralized energy planning currently in vogue in Washington.

Natural gas prices in the United States are at their lowest level in 10 years, due to abundant production arising from shale gas production on private and state lands. While companies are looking at new ways of using the natural gas, some policymakers want to direct the natural gas toward natural gas-fueled vehicles and the associated nationwide infrastructure without increasing exploration of natural gas. They seem not to be aware of American interest polls that favor natural gas resource development. According to a University of Texas poll conducted between March 5 and 16, 61 percent of Americans favor more natural gas resource development.[xv]

These politicians also seem not to be aware of government’s past attempts of picking technologies for the marketplace. They didn’t work. One just needs to review recent history regarding government funding and loans for the solar industry. As Representative Cantor stated, “I am not supportive of the Nat Gas Act. I think the policy behind that is Washington again picking winners and losers.”[xvi]

President Obama Lashes Out at the Bogeyman