The lives and fortunes of many in rural Pennsylvania have been changed for the better forever by the combination of horizontal drilling and hydraulic fracturing that has fundamentally transformed areas in economic stagnation or even decline into areas of opportunity and growth. Parents no longer must worry that their children will have to move away in order to secure a future for themselves, because Pennsylvania has become the second-largest natural gas-producing state in the nation, creating direct and indirect jobs of all kinds. New revenues are flowing into local and state coffers thanks to the generation of new wealth from American energy made possible by modern high-tech practices.

The publication Natural Gas Now recently featured an analysis from the Allegheny Institute for Public Policy (AI) detailing a substantial rise in tax revenue from landowners who lease to energy producers who, in turn, have helped make the United States the largest natural gas producer in the world. Pennsylvania now produces–by itself–more than enough natural gas to supply all of the residential needs of the entire United States. The AI analysis profiles the northeast region of the state and the counties in the Pittsburgh area where natural gas production has increased significantly. The beneficiaries of this increased revenue from certain parts of Pennsylvania are all Pennsylvania residents, as tax payments to the state have risen along with the volumes of natural gas produced and the jobs created locally.

The Allegheny Institute was able to capture the scope of income taxes paid by Pennsylvania’s natural gas renaissance by examining the amounts collected in a specific category within the tax code in a number of counties in Northeastern PA as well as the southwest part of the state.  Specifically, AI looked at the results captured under the category of “rent, royalties, patents and copyrights,” which includes the “extraction of coal, oil, gas or other minerals.” The boon to Pennsylvanians in both income and taxes paid to the state are remarkable.

For example, income from such activities in the northeast of the state went from $77,532,000 in 2007 to $564,150,000 in 2008, when shale leasing and development took off. In one year, Pennsylvania was able to tax a 600-percent increase in income. And although in the initial years most of that represented bonus bids, as development has brought more investment and more good jobs to residents, it has also brought revenue from royalty payments to landowners. By 2018, income had reached over $625 million per year in the region, representing an 804-percent growth in revenue over the period. Other counties in Pennsylvania averaged 85-percent more income.

Susquehanna County, which borders New York State where Governor Cuomo has banned hydraulic fracturing, saw revenues climb almost to 32 times what they were in 2006 by 2014, and generated $1.8 billion for landowners during an 11- year stretch, thanks to shale development. State tax revenues increased accordingly. New York landowners and counties just over the border suffer and look longingly while Pennsylvania thrives from the wealth created from American natural gas production and the jobs that come with it.

Not only has income grown for landowners in the region, the number of landowners receiving income that is taxable has also risen dramatically.  That means that not only is more income being generated, but it is also being distributed more widely, with more landowners in the region benefiting from shale development.  The chart below compares the Northeastern PA shale counties with other counties in the state. 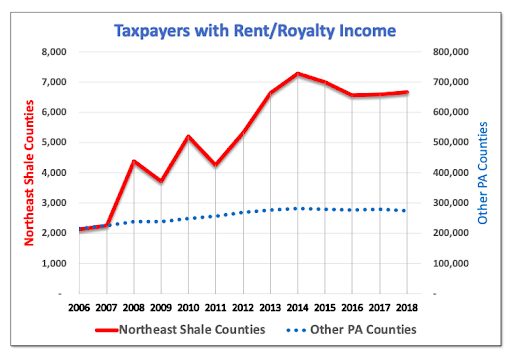 Pennsylvania is blessed to be endowed with huge shale natural gas deposits, which have not only helped America increase its energy security and lower prices for consumers, but benefits the state and its residents with good direct and indirect jobs, has stimulated manufacturing, and generates an enormous amount of taxable income for public needs. Northeastern Pennsylvania has benefited greatly, and in turn enriched the state’s revenues. From this region alone, about $6 billion in additional income has been generated that has not been allowed to be generated next door in New York due to the “keep it in the ground” movement that banned such revenues from being produced via shale natural gas deposits. Analysis of the record in the region makes the choice clear: new wealth, jobs and energy security vs. no growth and poverty, no jobs and energy dependence. Americans are lucky to have the contributions of Pennsylvania’s shale gas industry and its people.

The Plugged In Podcast #76: Tom Shepstone on Oil and Gas in Pennsylvania