For more than 5 years — longer than it took to win World War II — the Keystone XL pipeline has been awaiting a final decision from the Obama Administration, despite multiple favorable studies from the U.S. State Department. But Canada has decided to proceed with other pipeline avenues, looking at moving its oil sands to the east and west by pipeline, but not south to the United States. Two pipelines are being considered going west to Asian markets and two are being considered going east to Canadian refineries that are currently dependent on imports. These four pipelines would cost about $25 billion and could move almost 3 million barrels of oil per day—almost 4 times the proposed capacity of the Keystone XL pipeline.[i]

The Keystone XL pipeline was proposed in 2008 to move 830,000 barrels of oil a day from the Alberta to the U.S. Gulf Coast where it would supply U.S. refineries that were built to use heavy crudes, rather than the sweet light crudes now coming from shale formations. Those heavy crudes were originally obtained from Venezuela and Mexico–countries whose oil output has dropped in recent years, thereby providing the impetus for Canadian heavy oil to supply these refineries. But approval of the Keystone pipeline has been met with opposition from environmentalists, celebrities and billionaires, resulting in political delays.

The five and a half years without a decision so far on Keystone has been exasperating. TransCanada applied for a cross border permit to the U.S. State Department on September 19, 2008 to build the Keystone XL pipeline. The first environmental review by the State Department, completed August 26, 2011, indicated that the pipeline would not add significant amounts of greenhouse gases to the atmosphere. But a controversy occurred regarding its route over the Sandhills region in Nebraska, causing TransCanada to change its route to avoid that area. On January 18, 2012, President Obama officially rejected the pipeline because he had signed a law the previous December requiring a decision in 60 days.

TransCanada re-applied for a permit on May 4, 2012. On January 31, 2014, the State Department issued its final environmental impact statement, which again indicated that the pipeline would not significantly exacerbate climate change.  But, the revised route through Nebraska is now being litigated since it was approved by the Governor of Nebraska using new authorities given to him by the Nebraska legislature.  A district court judge ruled the new law did not give him sufficient authority to approve it and that decision was appealed and is awaiting a Nebraska Supreme Court decision.  On Good Friday afternoon of this year, the U.S. State Department used this as an excuse to extend the time for comments from government agencies, and will most likely not make a decision before the mid-term elections.[ii] This is clearly a delaying tactic, since the required decision by the Obama Administration is simply based on whether or not the pipeline is “in the national interest.”

An issue that opponents have developed concerning the route for the pipeline is that it crosses the Ogallala aquifer, which environmentalists indicate could be contaminated if an oil spill should occur. However, Dr. Burt Fisher, a hydrogeologist, indicates that fears of massive risk to water in the aquifer in the case of a potential spill are overblown because the water in the aquifer would prevent any spilled oil from sinking into it. Since oil floats, any spill would be able to be cleaned up quickly.[iii]  Moreover, the Ogallala aquifer area has already seen decades of substantial oil and gas exploration without contaminating the aquifer. In fact, some parts of the Ogallala have seen some of the heaviest drilling in the country.

The southern portion of the Keystone XL has already been built. The reason the 500 mile southern leg from Oklahoma to the Gulf Coast has already been built is because a Presidential permit was not required and because a glut of oil was accumulating in Cushing, Oklahoma. The northern part—extending 875 miles from the U.S.-Canadian border in Montana thru Nebraska—still needs Presidential approval since it crosses the border. From its origin in Alberta to its final destination at the Gulf Coast, the pipeline would transit 1,700 miles with a capacity to carry almost 35 million gallons of oil a day.

In its absence, the oil is being moved by rail. From 2012 to 2013, rail shipments of crude oil in the United States increased 74 percent. And, Canada has announced plans to expand its rail transport capacity for oil by an amount that would more than replace Keystone XL.[iv] But, although rail is safe, its safety record is not as good as that of pipelines where products reach their destination safely more than 99.999 percent of the time.

The Alternative Pipelines through Canada

There are four pipelines proposed to move oil from Alberta through Canada. Not all of these alternative pipelines, however, will need new construction. Two of the pipelines will move oil east. In March, Canada’s National Energy Board approved a request from Enbridge to reverse the flow of its Line 9 pipeline–a 400-mile pipeline built in 1975 in Ontario and Quebec. Line 9’s flow has been reversed twice before. It currently moves imported crude west from Canada’s east coast. For about $400 million, the pipeline will begin moving about 300,000 barrels per day of Canadian oil to refineries in the east before the end of this year. 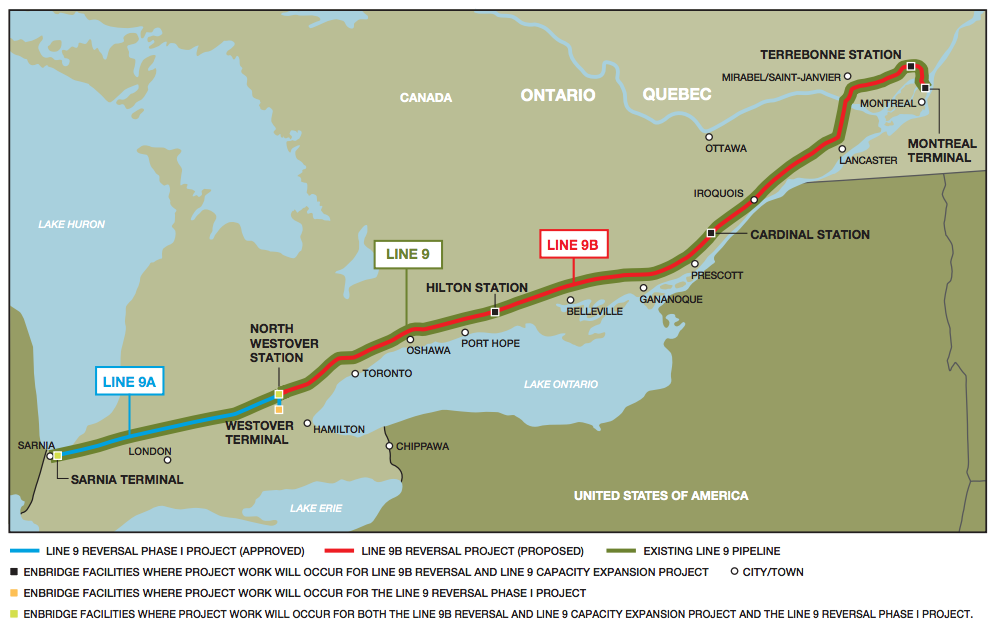 The second of the two projects to move Canadian oil east consists mainly of converting a natural gas pipeline to oil. This project (the Energy East pipeline) is proposed by TransCanada, would cost $11 billion, and would move 1.1 million barrels per day from Alberta to refiners in Quebec City and Saint John—a distance of 2,700 miles. If approved, it would be the largest and longest pipeline in North America. TransCanada plans to submit its official application for Energy East next month, is expecting approval by mid-2015, with completion expected by 2017.

The other two projects would ship oil sands west to Asian markets, principally China. Kinder Morgan has proposed the TransMountain expansion project, which would cost around $5.4 billion and move 890,000 barrels per day. Enbridge has proposed the Northern Gateway project, which would cost around $7.9 billion and move 525,000 barrels a day. Northern Gateway was recommended for approval by a joint review committee late last year after 3 years in the approval process with 209 conditions, including developing a marine mammal protection plan, researching heavy oil cleanup and conducting emergency response exercises. If the project is approved by the Canadian government, construction on the pipeline would start this year and be completed by 2018.[vi] TransMountain is expected to receive a much faster regulatory review due to legislation the Canadian government passed to shorten the environmental review process,[vii] and because this would be an expansion of an existing pipeline. 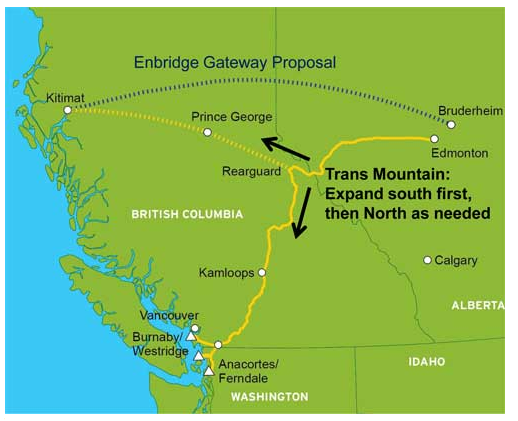 Completing the Keystone XL pipeline will create thousands of new jobs (42,100 direct, indirect, and induced), strengthen our relationship with our Canadian neighbor, allow the United States to become less dependent on the Middle East for oil, and result in less air pollution than using trucks and trains to move oil from the north to the south. Further, this portion of the pipeline will move 100,000 barrels per day of U.S. crude oil from the Bakken, which will significantly help reduce current shipping constraints since 90 percent of Bakken oil is expected to be moved by rail this year.[viii] Polls have shown that 2 out of every 3 Americans support the pipeline. So, why can’t the President decide whether this pipeline, with all these benefits on both sides of the border, is in our “national interest?”  What, exactly, does he see as being in our “national interest?”

[i] Bloomberg Business Week, The Keystone XL Pipeline Gets Some Canadian Competition, May 20, 2014, http://www.businessweek.com/articles/2014-05-20/the-keystone-xl-pipeline-gets-competition

[iv] The Globe and Mail, Saying no to Keystone XL is saying yes to uglier alternatives, April 28, 2014, http://www.theglobeandmail.com/globe-debate/saying-no-to-keystone-xl-is-saying-yes-to-uglier-alternatives/article18297849/

[viii] LA Times, Trains and crude oil are too often an accident waiting to happen, May 19, 2014, http://www.latimes.com/opinion/op-ed/la-oe-hein-oil-train-accidents-20140520-story.html

The Nod-Nod, Wink-Wink Game Pundits Play With the IPCC