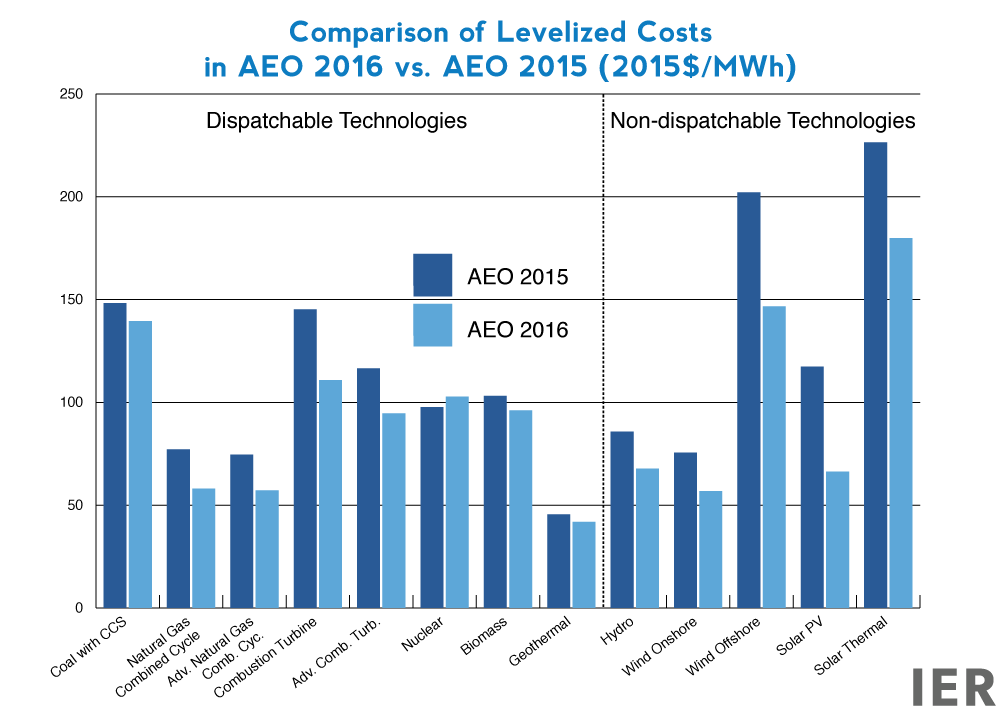 EIA’s capital costs assumptions for Annual Energy Outlook 2016 show large reductions for hydropower and solar PV generators compared to those used in last year’s report. Capital costs for hydropower generators are about 12 percent lower; and for solar PV, they are about 24 percent lower.[iii] The capital costs are shown in the graph below. These capital costs represent a typical facility and are overnight costs, which exclude interest accrued during plant construction and development. EIA uses regional cost adjustment factors to represent regional differences in labor and construction costs. Variability in cost is also based on project size, location, and access to key infrastructure (such as grid interconnections, fuel supply, and transportation).

For wind, EIA states “the cost favorability of the lowest‐cost regions compound the underlying variability in regional cost and create a significant differential between the unadjusted costs and the capacity‐ weighted average national costs as observed from recent market experience.”  To correct for this, the average capital cost that EIA provides for wind in AEO 2016 is “a weighted average cost… based on the regional cost factors assumed for wind in the AEO2016 and the actual regional distribution of wind builds that occurred in 2014.”  However, for comparison purposes with AEO 2015, we use $1837 per kilowatt for the capital cost of onshore wind as noted in EIA’s footnote 10 to Table 8.2. 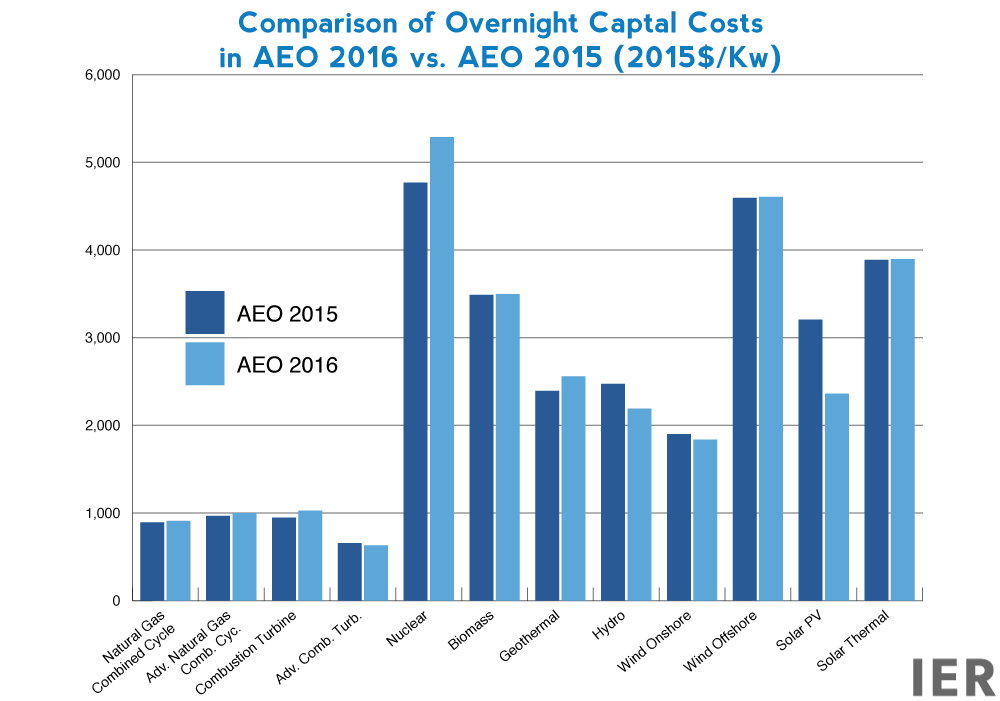 Between AEO 2015 and AEO 2016, the Congress passed and the President signed into law an omnibus spending bill that gave a five-year extension of renewable energy tax credits for wind and solar. The bill extends the Investment Tax Credit (ITC) for solar, which was originally expected to sunset at the end of 2016, until 2021. The 30-percent ITC will be extended until December 31, 2019. Projects that start construction in 2020 and 2021 will receive 26 percent and 22 percent, respectively. To obtain these ITC rates, all projects must be completed by 2024.[iv] After that, the ITC for solar will revert to its permanent 10 percent rate.

The Production Tax Credit (PTC) for wind developers is a credit of $0.023 per kilowatt hour for wind generation. The legislation retroactively extended the PTC for 2015 and will maintain that level through 2016, at which point it will start phasing down at 80 percent of its present value in 2017, 60 percent in 2018 and 40 percent in 2019. It expires in 2020. The legislation allows wind projects to qualify as long as they start construction before the end of the period.[v] 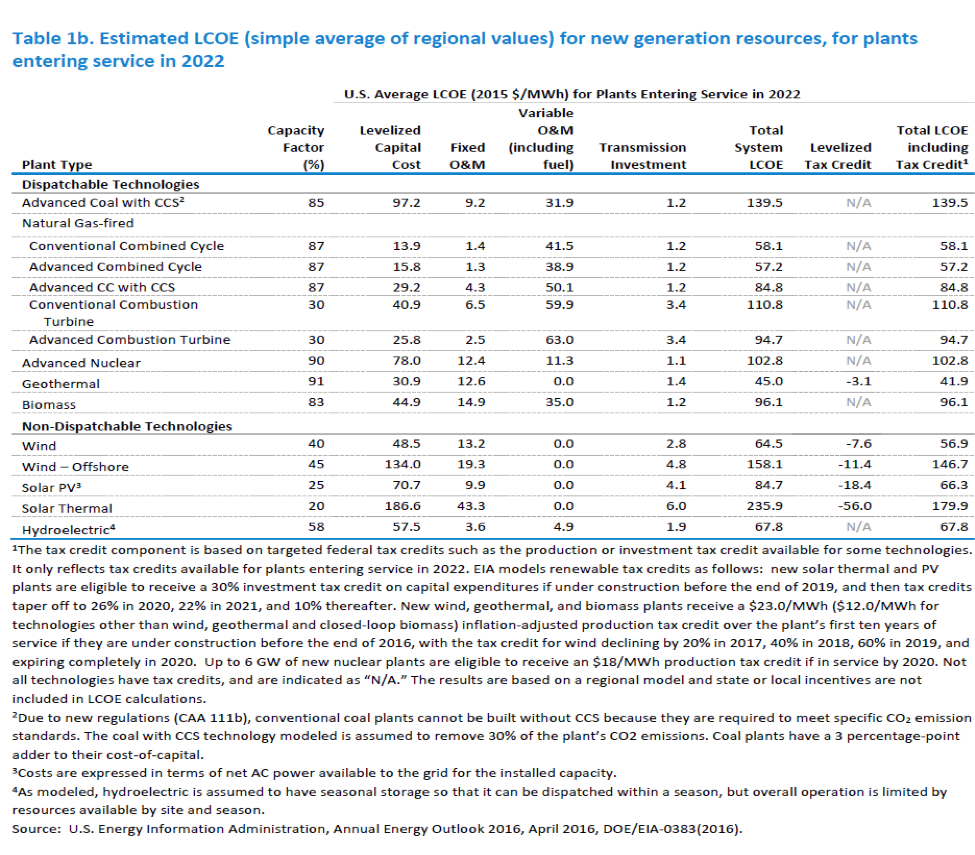 The values shown in the above table are calculated based on a 30-year cost recovery period, using a real after tax weighted average cost of capital of 5.6 percent. (In AEO 2015, it was 6.1 percent; the lower rate in AEO 2016 reduces the levelized capital cost component.) As in the past, EIA adds a 3-percentage-point increase in the cost of capital when evaluating investments in new coal-fired power plants, new coal-to-liquids plants without carbon capture and storage (CCS), and pollution control retrofits to represent the financial risk associated with major investments in facilities with a relatively higher rate of carbon dioxide emissions. EIA states, “Although any new coal-fired plants are assumed to be compliant with the new source performance standard for carbon emissions under Section 111(b) of the Clean Air Act, these plants only capture 30% of CO2 emissions and would still be considered high emitters relative to other new sources and thus may continue to face potential financial risk if carbon emission controls are further strengthened.” Thus, the levelized costs for coal plants in EIA’s forecast are higher than they would be if the same cost of capital was used for all technologies.

Because the duty cycle for intermittent renewable resources, wind and solar, is not operator controlled, but dependent on the wind and sun, they will not necessarily correspond to operator dispatched duty cycles. As a result, their levelized costs are not directly comparable to those for other technologies and are shown separately in the table. 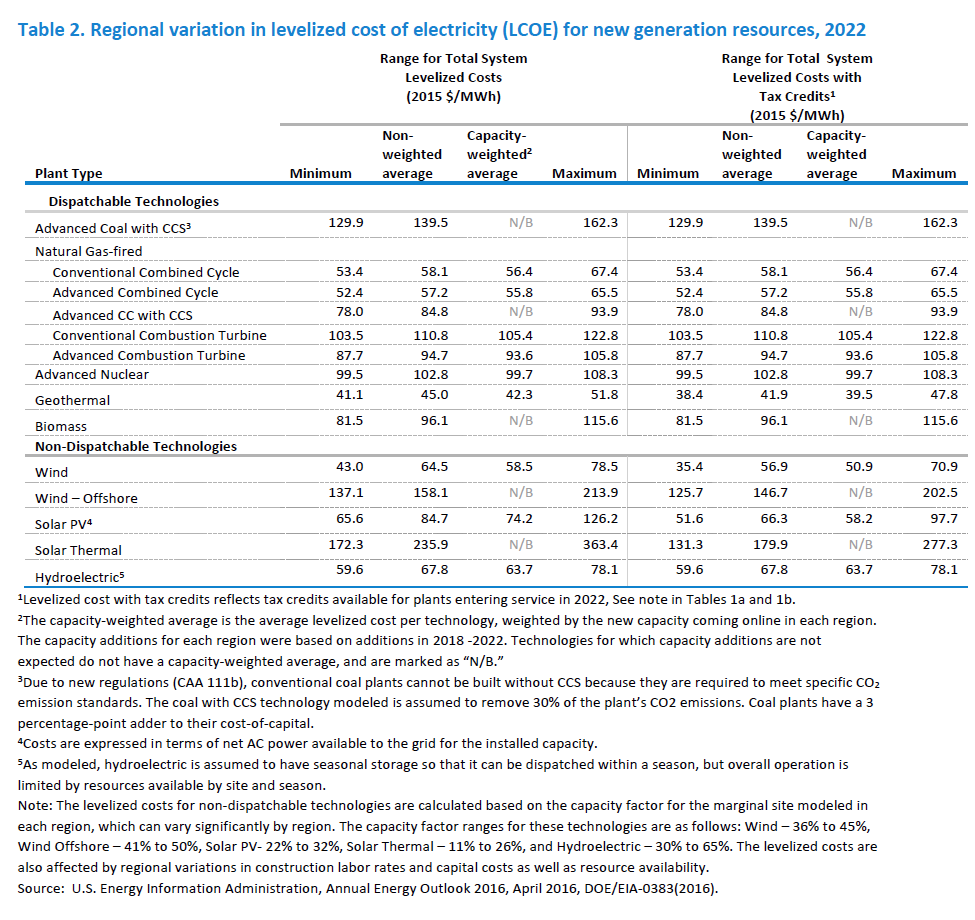 The levelized costs for natural gas generating technologies was also much lower in AEO 2016 than in last year’s AEO despite the capital costs being about the same. The major difference was in the variable operations and maintenance component which was reduced by 30 percent for the combined cycle gas units. One explanation is that natural gas prices delivered to electric utilities was less in this year’s AEO compared to last year’s AEO. In 2022, they are over $1 per thousand cubic feet less. (See graph below.) 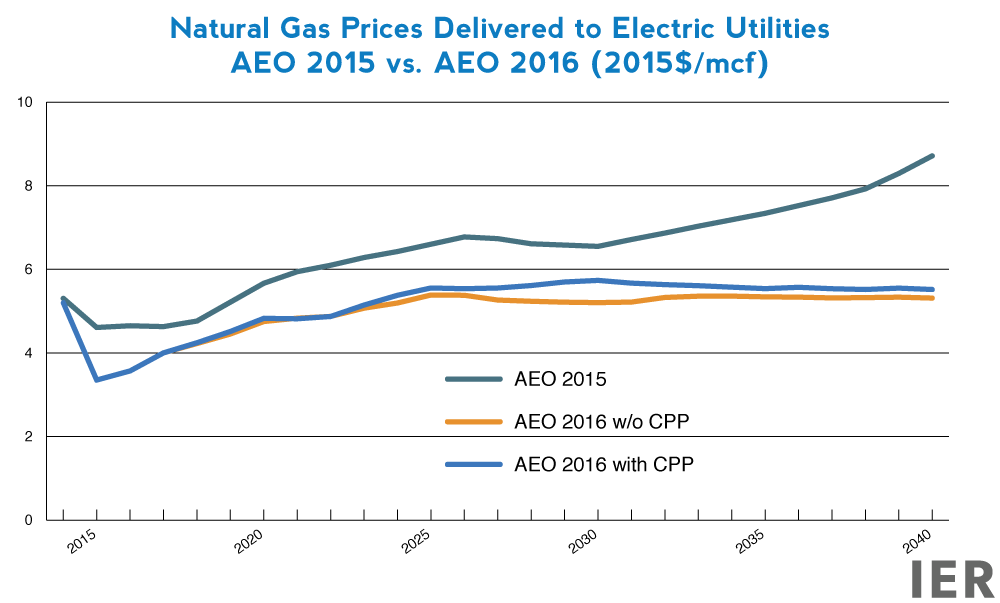 Assumptions drive the result and that statement is clearly reflected in this year’s AEO, which shows a strong increase in renewable energy generation, particularly when EPA’s Clean Power Plan is included in the forecast. But, even without incorporation of the Clean Power Plan, renewable energy garners a 10-percentage point increase in generation by 2040 due mainly to the lower capital cost assumptions and the extension of tax credits for renewable technologies.