Transportation sector energy consumption is expected to decline over the forecast period, which differs markedly from history where the average annual growth over 1973 to 2007 period was 1.3 percent.

(2007 was the peak year for transportation consumption). As a result, petroleum-based gasoline use drops by 26 percent over the 2015 to 2040 period as light-duty vehicle fuel economy increases with Obama Administration Corporate Average Fuel Economy (CAFE) standards that mandate an average fuel efficiency of 54.5 miles per gallon by 2025.[ii] 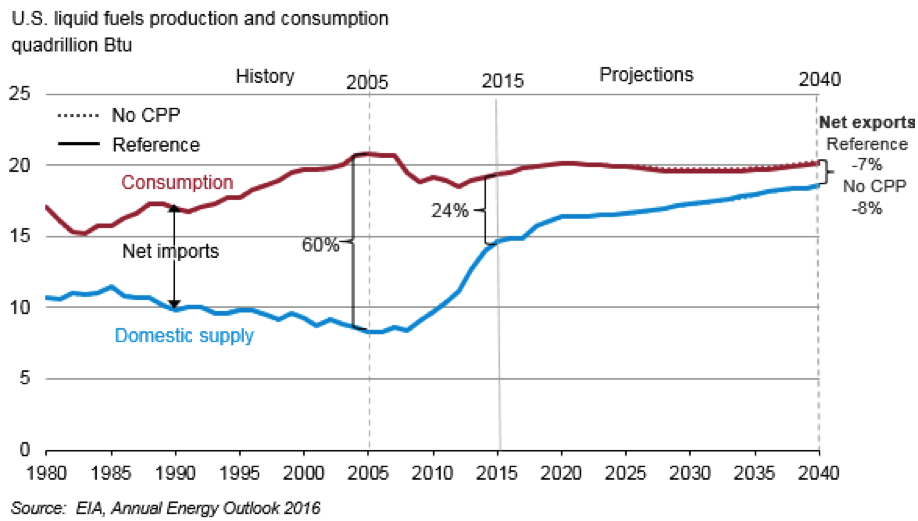 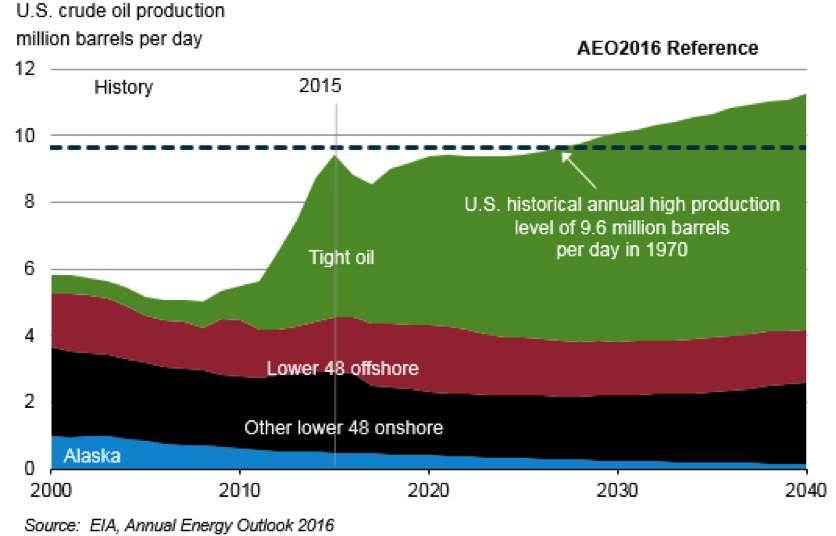 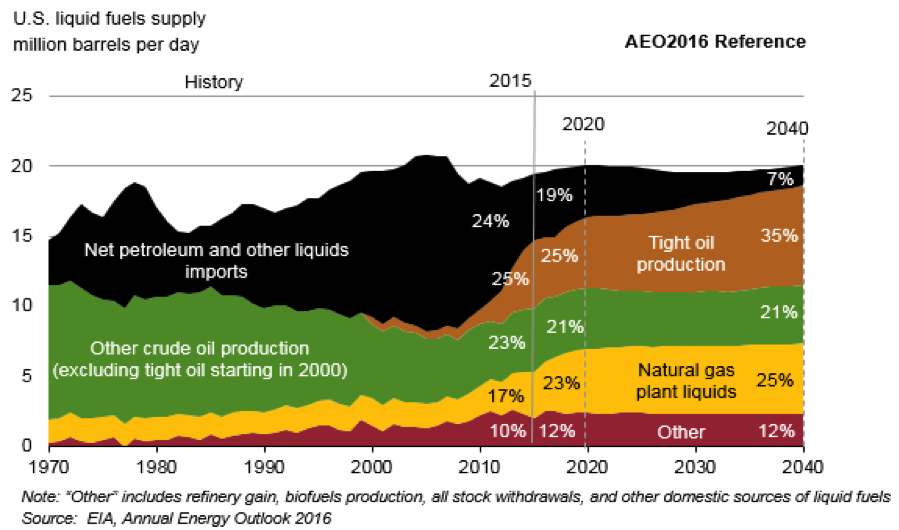 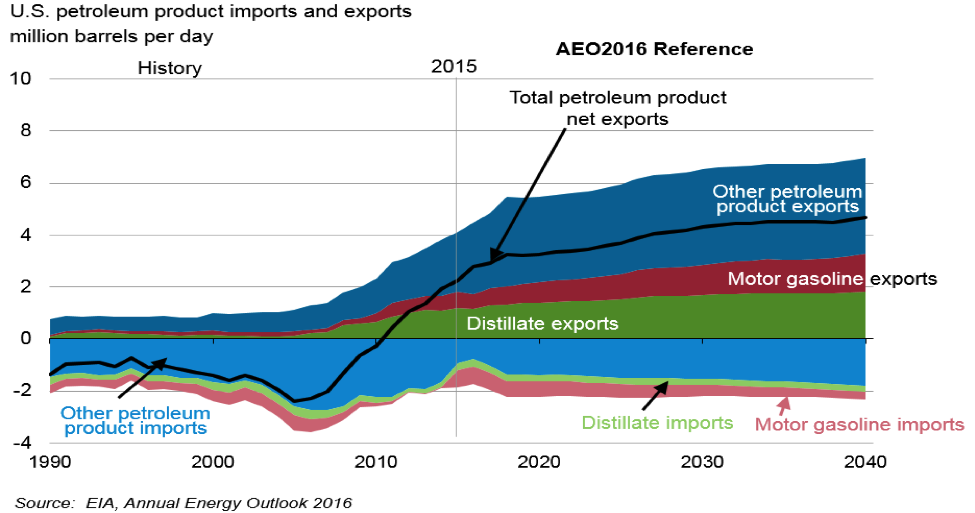 Natural gas prices are expected to remain below $5 per million British thermal unit (Btu) through 2040. The Henry Hub spot price for natural gas averaged $2.62 per million Btu in 2015, the lowest annual average price since 1995. Despite the low price, production gains continued as a result of abundant domestic resources and improved production technologies. Natural gas prices are expected to rebound from their 2015 levels, increasing above $4.40 per million Btu by 2020 (an average increase of 11 percent annually). The price increases are the result of increased demand, notably for liquefied natural gas (LNG) exports from projects that are already under construction. After 2020, natural gas production, end-use consumption in the industrial and electric power sectors, and exports of LNG are projected to increase. However, technology improvements, which result in drilling cost declines and increased recovery rates, allow productive capacity to keep pace with demand, resulting in stable prices the rest of the projection period.

In the case without the CPP, less demand for natural gas from the electric sector and more coal-fired generation results in lower average annual U.S. natural gas prices at the Henry Hub over the 2022 to 2040 period. 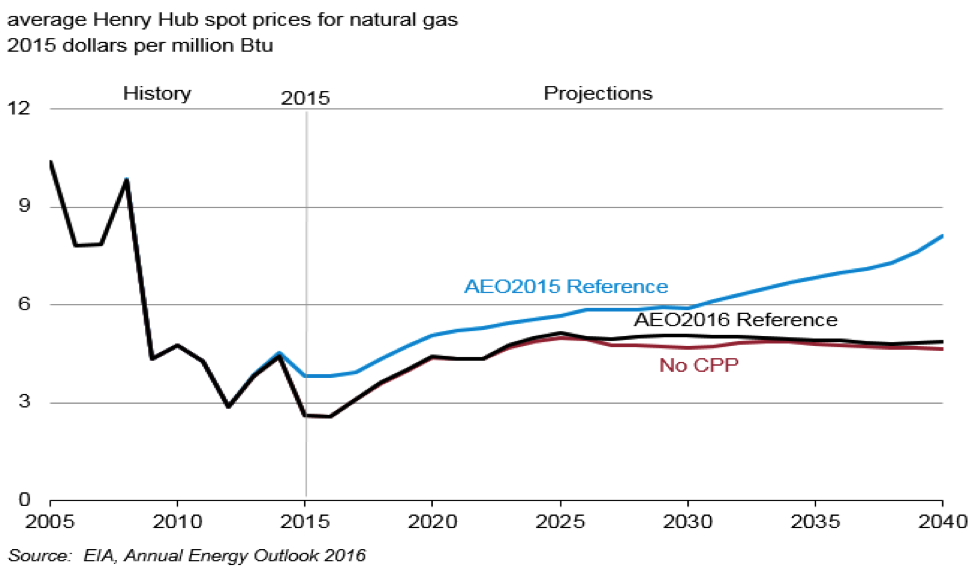 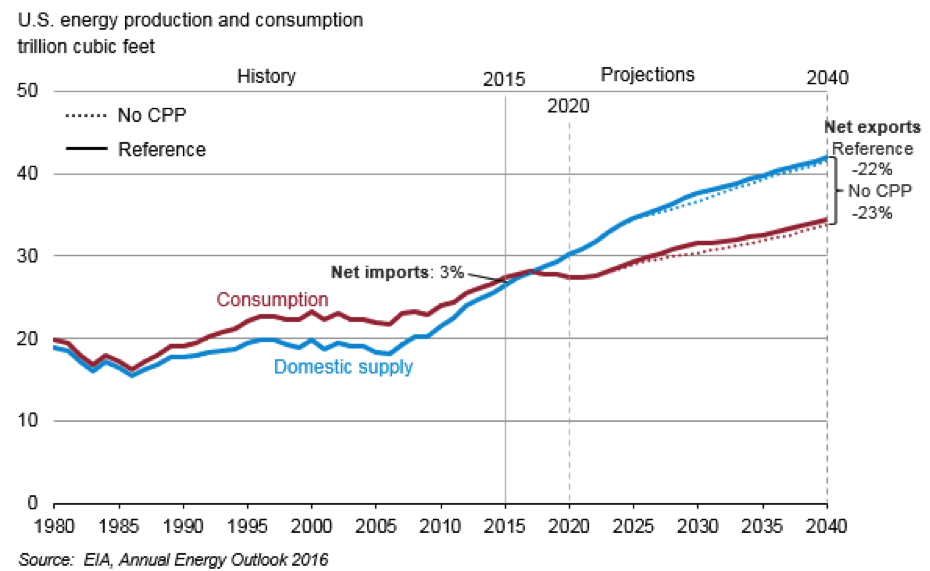 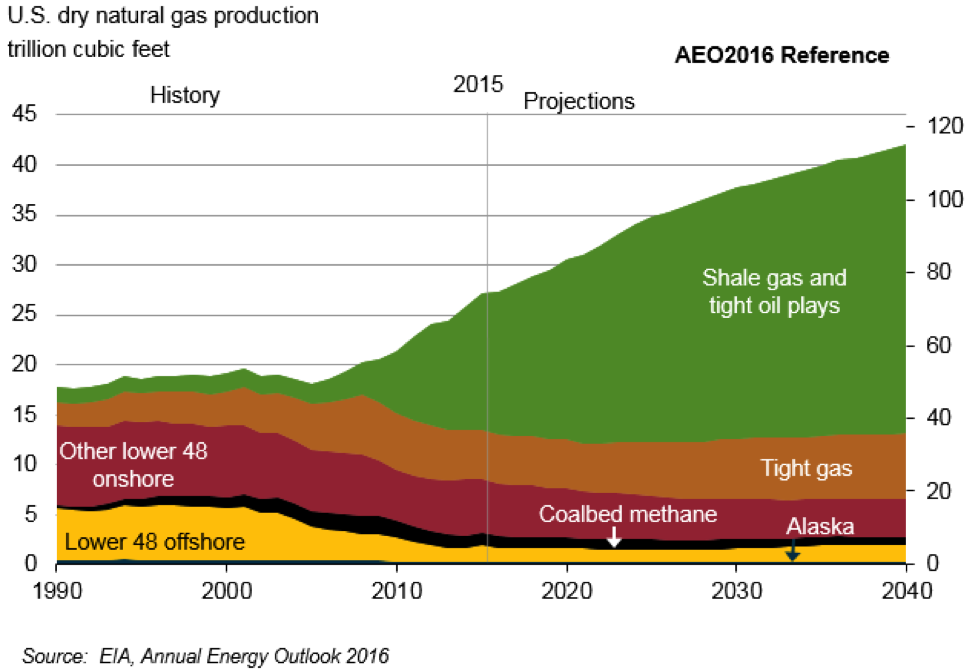 The United States remains both an importer and exporter of natural gas over the projection period, but becomes a net exporter in 2018. Natural gas imports into the United States are expected to drop by 49 percent between 2015 and 2040 while natural gas exports from the United States, both by pipeline and LNG, grow over five-fold. The initial rapid growth in exports is due to the five LNG export projects currently built or under construction in the Mid-Atlantic and the Gulf Coast regions, with capacity to export 2.9 trillion cubic feet per year. Additional facilities are expected to be built to accommodate LNG exports of 6.7 trillion cubic feet in 2040.

U.S. natural gas exports to Mexico by pipeline will continue to increase in the near term to meet Mexico’s increasing demand for natural gas, particularly in the electric power sector. The growth in near-term consumption will be met by several pipeline projects currently under construction. After 2020, however, U.S. pipeline exports to Mexico gradually decrease, reflecting the initiation of new oil and natural gas production projects in Mexico. U.S. net imports from Canada continue to decline as relatively low prices make natural gas produced in the United States more competitive. 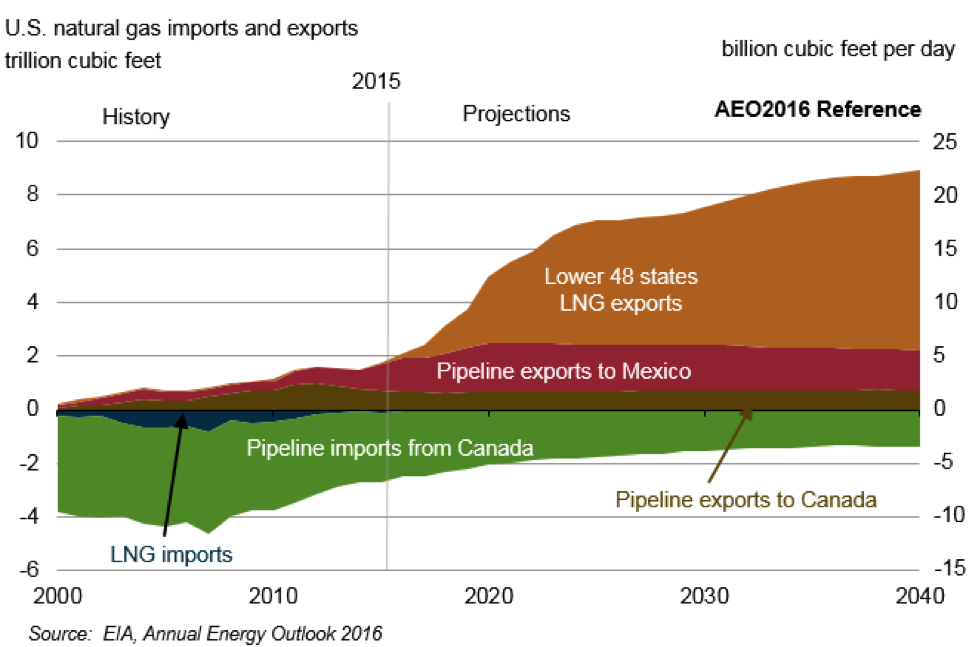 EIA has made major changes to its forecast with the incorporation of subsidies and lower costs for renewable fuels and with the regulatory changes of the Obama Administration, including the Clean Power Plan. Despite these changes, the United States is expected to rely on oil, natural gas, and coal for 77 percent of its energy needs by 2040. EIA sees the energy renaissance continuing with the United States becoming a net exporter of natural gas by 2018 and net oil imports declining to 7 or 8 percent in 2040, depending on the case.

News Flash: Wind Power is Not Cheaper than Coal