In 2011, however, the story is expected to be different. Although onshore oil production is expected to increase from 2010 levels, it will not be enough to compensate for the losses caused by the Administration’s drilling moratorium. As a result, EIA is projecting a decline in oil production of 26,000 b/d.  That production decline will be offset somewhat, the agency’s expects, by ethanol production that will increase 30,000 b/d from 2010 levels. Nevertheless, because petroleum demand is expected to increase, imports must compensate. EIA projects those imports to be petroleum products, which will be 190,000 b/d higher than they were in 2010, helping to not only meet the demand increases in 2011, but also to offset a forecasted decline in crude oil imports of 11,000 b/d.

The decreased production impacts from the Gulf of Mexico that are forecast by EIA in its July Short-Term Energy Outlook are higher than they were in the June Outlook. EIA indicates that it will continue to refine the estimates as more information becomes available. And more information has become available. The moratorium has now extended to 3 rigs in the Pacific, off the coast of Santa Barbara. A prolonged moratorium in the Pacific would impact more than 100,000 barrels of oil a day, resulting in even more dependence on foreign oil. It is unclear why the U.S. Department of Interior extended the moratoria to the Pacific, inasmuch as operations there differ from those that caused the oil spill in the Gulf and drilling operations there have been performed for over 40 years without a spill.[iii]

According to EIA, 30 percent of total oil production in the United States in 2009 came from the offshore area of the Gulf of Mexico [iv] and more than 80 percent of Gulf production was from deep water.[v] EIA’s long-term projections expect total offshore production to reach 38 percent of domestic production by 2035, increasing by 1 million barrels per day between 2007 and 2035, an annual rate of increase of 2.3 percent. That increase includes drilling off the Atlantic and Pacific coasts, owing to the expiration of the moratoria on offshore drilling that was permitted by both Congress and the administration in 2008. Of course, that was before BP’s oil spill on April 20, 2010, and the 6-month drilling moratorium enacted by the Obama administration.

The result of the Obama administration’s moratorium on deepwater exploratory oil drilling and increased offshore drilling regulations was to shut down the operation of 33 deepwater rigs and stall permits in shallow water.  It took the Federal government until July 19th to issue a permit to drill in shallow water.[vi] In the deepwater areas, things are even more grim. Because keeping rigs idle costs their owners $500,000 a day (in the lost opportunity costs of drilling elsewhere),  2 oil rigs have left the Gulf of Mexico for foreign countries where the rig owners feel the atmosphere is more conducive to offshore drilling; the owners of an additional rig are contemplating a move. More owners may make the move if the drilling moratorium goes past November.[vii] Rep. Pete Olson (R-TX), who called for lifting the moratorium, said: “Once the rigs relocate, it could be a minimum of five to 10 years before they return.”[viii] Others are not so pessimistic, however, because of a possible surplus of newly built rigs next year. Nonetheless, there is a great deal of uncertainty as to whether the EIA’s long-term oil production forecasts will come to fruition. 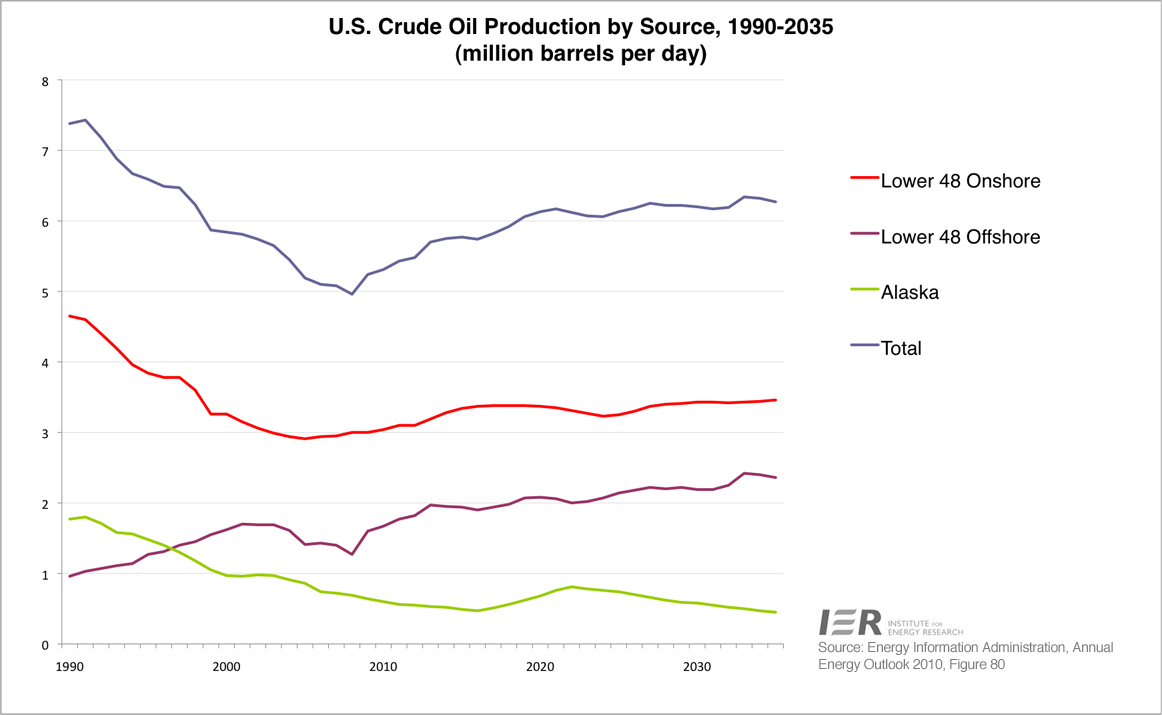 That uncertainty includes whether the Obama Administration will open the waters off the Atlantic and Pacific coasts to oil and natural gas exploration. While President Obama had previously been open to such a move, the actions that are required to open those areas to exploration have been delayed by his administration.[ix]

Of course, if shut-downs in the Gulf were to continue, whether because of a moratorium or because of economic conditions that made drilling in the Gulf a sub-par investment, the short-term impacts noted above would get magnified over time.  A complete shut-down of deepwater drilling would reduce U.S. oil production by more than 27 percent by 2035, and oil imports would be 19 percent higher.[x] Further, employment would be reduced by 175,000 jobs (direct and indirect) each year between now and 2035, and GDP would be reduced by $500 billion ($20 billion annually).[xi]

The above estimates were based on the reference case forecasts from EIA’s Annual Energy Outlook 2010[xii] and projected development expenditures for deep water development in the Gulf from a 2009 IHS Global Insight study. A more recent analysis by Wood Mackenzie substantiated the project cost assumptions, indicating that higher drilling costs, an estimated 25 percent increase in capital costs from increased regulations and taxes, and regulatory delays would make the deepwater fields of the Gulf of Mexico sub-economic, that is, unable to achieve a post-tax internal rate‐of‐return of 10 percent.

With the oil spill from BP’s Macondo well essentially contained and only some tar balls left, the question is still open as to whether the Obama administration will restore drilling in the Gulf and the Pacific and lift the moratoria or at least not extend them past November so that the nation can benefit from its domestic resources, instead of competing with China and other countries for additional foreign oil supplies. Also at issue is whether oil companies will be subjected to unreasonable rules that will make offshore oil production unprofitable. Congress[xiii] is currently working on legislation to improve safety and to help prevent future oil spills from occurring,[xiv] but that legislation may prove too onerous for the industry, subjecting the American public even more to the whims of foreign countries.

[x] Potential Impacts of Proposed Increases in Regulations & Taxes on Deepwater Drilling in the Gulf, http://www.scribd.com/doc/34950965/Potential-Impacts-of-Proposed-Increases-in-Regulations-Taxes-on-Deepwater-Drilling-in-the-Gulf