According to President Obama, the United States contains only 2 percent of the planet’s proven oil reserves, Of course, he’s right — to a point. In classic fashion, he’s using a technicality to skirt the facts and keep the myth of energy scarcity alive. The reality is that the U.S. has enough recoverable oil for the next 200 years, despite only having 2 percent of the world’s current proven oil reserves.

Proven oil reserves are not all of our oil resources—not even close. In fact, proved reserves represent a tiny portion of our total oil resources. Proven (or proved) oil reserves are reserves that have already been discovered, typically through actual exploration or drilling, and which can be recovered economically. That estimate does not include oil that we know about, yet are unable to access because of regulatory barriers. For example, the billions of barrels of oil in ANWR are not included in our proved oil reserves.  So let’s look at the facts.

Currently, the United States has 1,442 billion barrels of technically recoverable oil, but only about 20 billion barrels are considered proven oil reserves.[ii] That is partly because the federal government is denying access to hundreds of millions of acres oil-rich federal lands: the Alaskan National Wildlife Refuge, the Naval Petroleum Reserve-Alaska, federal waters off the Atlantic and Pacific coasts, at least 45 percent of the Gulf of Mexico, the Chukchi and Beaufort Seas, and oil shale on federal lands in Colorado, Utah, and Wyoming, to name a few. In the case of oil shale (an oil composed of kerogen), technology needs to be perfected to make its production viable, but this will not happen until the land is leased. Regrettably, the Department of Interior has stopped a leasing program Congress directed it to undertake.

Proved Oil Reserves Are Not Static 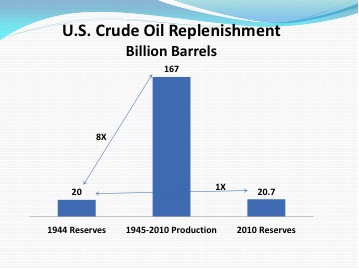 What happens is one or more of the following: 1) technology is found that converts hard-to-produce resources into proven reserves, 2) oil prices increase to allow more expensive types of oil to be produced, and/or 3) companies are able to purchase additional leases and explore for new basins of oil. An example of the first case where technology enables oil resources to become proven reserves is hydraulic fracturing and horizontal drilling used to produce shale oil resources, most notably in North Dakota. North Dakota now ranks third among the states in oil production.[iii]  Its proven reserves have increased 25-fold in 13 years, and are likely to grow much larger.  An identical increase from the rest of the United States would result in US reserves of 500 billion barrels, or almost twice those of Saudi Arabia. 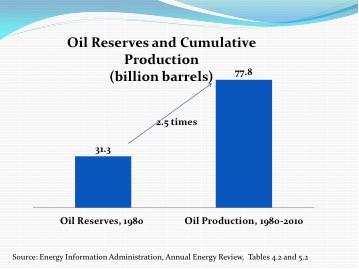 Proven oil reserves are not stagnant. They are continually changing as companies explore, find and produce oil.  Declaring that “the U.S. has only 2% of the world’s oil is akin to saying that the only gasoline we will have is that which is in our tanks.”  The president should know better, and if he does not, his Secretaries of Energy and Interior should tell him.

So, what can be done to increase our oil reserves?  First and foremost, the United States needs to open more federal lands and waters to oil leases. Currently, only about 3 percent of government property is leased for finding energy.  Once that is done, American ingenuity will take over to explore and produce those resources. ”According to a Gallup poll, an overwhelming number of consumers — 85% — say Obama and Congress should take “immediate” action to keep a lid on (gasoline) prices.”[v]

It is time our government stops misleading the American public and starts owning up to the reality of our energy situation – we are a nation rich in energy resources with poor policies that do not allow us to access them.

North Dakota and the Economic Miracle