As most Americans know, gas prices are unusually high for this time of year. Although some people blame it all on “greedy oil companies”—an explanation that begs the question of why oil companies got so greedy this Christmas—a better culprit is Ben Bernanke, chairman of the Federal Reserve.

Since the fall of 2008, the Federal Reserve has added more than $1 trillion to the financial system. In conjunction with economic uncertainty, this flood of dollars has led many investors to flock to commodities, including crude oil. The rise in oil explains a large portion of the run-up in prices at the pump.

The Rising Price of Gasoline

The only other time we have had $3.00 gasoline in December was in 2007, and that of course was part of the record run leading into the summer of 2008.

The Rising Price of Oil

Although there are many factors affecting the retail price of gasoline—including refinery issues and taxes—obviously a major component is the price of crude oil. To understand the wild swings in gasoline prices, a large part of the explanation involves the wild swings in oil prices:

The world economy is incredibly complex, and it would be overly simplistic to blame a single factor for all of our economic turmoil. However, many economists believe that the Federal Reserve’s easy-money policies after the dot-com crash fueled the housing bubble. Once that bubble burst, Bernanke’s even looser policies have fueled a resurgence in asset and commodity markets: 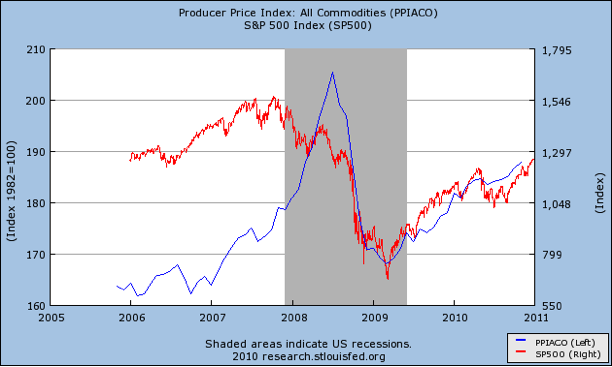 In the chart above, the red line is an index of the S&P 500, and shows that the stock market began declining in late 2007, just when (after the fact) the National Bureau of Economic Research said that the recession officially began. In the late summer of 2008, commodity prices peaked and then began crashing as the global financial panic set in.

Both the stock market and commodity prices continued falling for months, but then experienced a dramatic turnaround in March 2009. This was precisely when Ben Bernanke’s Fed announced the first round of “quantitative easing,” i.e. its plan to buy more than a trillion dollars in U.S. Treasury debt and mortgage-backed securities.

The apparent “recovery” had petered out by mid-2010, but stocks and commodity prices began surging once again in late summer, when rumors of “QE2”—a second round of quantitative easing—picked up steam in the markets.

Since the fall of 2008, the Federal Reserve has added more than $1 trillion in “high-powered money” to the financial system. Many critics were alarmed at the inflationary consequences of such large infusions of new money, but thus far we have not seen unusual increases in the Consumer Price Index.

However, it would be premature to dismiss the inflationary warnings altogether. There is compelling evidence that the bursts of monetary inflation are fueling large price hikes, just not at the consumer level (yet). From their trough in December 2008, crude oil prices have tripled in the last two years.

In times of economic uncertainty, many investors flock to commodities as a hedge against future inflation. Although the Fed can create boatloads of new paper currency, it can’t print barrels of crude oil or ounces of gold. In a world of volatile fiat money and stock markets, many investors feel safer holding “real” assets.

We should not be surprised that Ben Bernanke’s continual pledges to create new dollars are going hand-in-hand with rising oil and gasoline prices.

Talk is Cheap: We Need Action on Offshore Drilling Permits