It is not too difficult to understand President Obama’s point of view on energy.  When he first took office, he was given the opportunity to select a new Secretary of Energy.  He chose Steven Chu, who had just been quoted in the Wall Street Journal saying that “somehow we have to figure

out how to boost the price of gasoline to the levels in Europe.”  Currently, a gallon of gasoline in Europe will set you back over $8.

Then, faced with the decision of who to place in charge of the Department of Interior, which controls much of America’s vast energy resources, he chose a senator who went on record to oppose any new drilling in the Outer Continental Shelf, even if gasoline prices reached $10 per gallon.

President Obama chose to surround himself with anti-energy advocates that view affordable energy as a problem, not a solution.  So it is important to keep that in mind as you watch him and members of his administration as they attempt to handle the current crisis of rising energy costs.  While they act as though affordable energy is the goal, observers must remember how these activists deliberately fought for higher energy prices before the public spotlight was shining so brightly on them.

Yesterday’s Senate Energy and Natural Resources hearing with Secretary Ken Salazar and BOEMRE director Michael Bromwich is a perfect example.  Salazar’s testimony wasted no time before taking credit for last year’s uptick in domestic oil production.  However, a 2008 letter to Congress from Ken Green, the president of the American Association of Petroleum Geologists, explains that “the process of leasing, evaluating, drilling, and developing an oil or natural gas field typically takes five to ten years.”

That means that most wells producing today are the result of leases granted under the Bush and Clinton administrations.  To judge the Obama Administration’s success in promoting domestic oil and gas production, one must look years down the road from his inauguration in 2009.  Judging from the Energy Information Administration’s projections for the Gulf of Mexico, the president’s policies are having the opposite effect of what he would like us to believe: 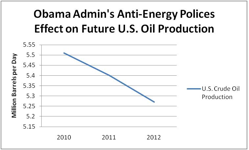 Then Salazar turned his attention to the leases that are not currently producing oil or gas: he complains that 70 percent of offshore leases and 57 percent of onshore leases are “inactive.”  While he never explains why companies would simply sit on leases for which they paid huge amounts of money, he insists that companies need “incentives” to speed things up.

This is the same tired argument that was used in 2008 and again earlier this year.  While Salazar seems ignorant of the facts, his colleague Michael Bromwich was exactly right when he recently testified that companies are “doing well” if they find oil on one out of every three offshore leases.

The reality is that not every lease contains oil or gas.  The same report that Salazar is citing notes that “producing acres as a percentage of leased acres have averaged about 30% over the past ten years.”  After millions of dollars of investment, companies may find no resources to produce.  Or they may find that, at current prices, the resources would not be economically viable to extract from the ground.  Unless Secretary Salazar wants to foot the bill for exploration and tell bidders which leases contain resources and which do not, there will continue to be a lot of very expensive dry holes as there have been for 150 years of drilling.

Even if companies do believe that they can find oil, the lease cannot be considered ‘active’ until the company receives the dozens of necessary permits to explore for energy.  The Obama Administration’s withholding of permits is well documented and has even resulted in a contempt order from U.S. District Judge Martin Feldman.  In the past year, they have issued only one new deepwater drilling permit.  Unless the administration starts issuing more permits, many leases are forced to remain in the ‘inactive’ category.

The Obama Administration is desperately trying to deflect blame for the rising price of energy.  Gone are the days when they could openly speak about the need to make energy prices “necessarily skyrocket.”  Now that they are under the glare of public opinion, the president and his allies are singing a new song.  But make no mistake about it – as global demand grows, the administration is restricting our energy potential and putting us at the mercy of state-owned energy companies that are inimical to American values.  Unless the Obama Administration reverses course on their anti-energy agenda, they will continue to put us at a long term disadvantage to the developing nations of the world.