“EIA has included information on the production of oil and natural gas on federal lands in the AER that significantly under-represents what is actually occurring:” letter from Rep. Edward Markey to Howard Gruenspecht, Acting Administrator of the Energy Information Administration.

Representative Edward Markey (D-Mass.) recently sent a letter to the Energy Information Administration (EIA) requesting the agency fix a problem with oil and gas production data on federal lands it reports in the Annual Energy Review (AER). Markey’s interest in writing to EIA was to indicate that the production volumes reported on federal lands by EIA were low, and to point out that production rose in fiscal year 2010, rather than declined as the EIA data showed and as the Institute for Energy Research (IER)[ii] and the Heritage Foundation reported on their websites.

EIA has yet to correct its reporting problem, and is waiting on the Department of the Interior (DOI) to provide correct data. In the meantime, IER painstakingly generated the available data for fiscal years 2006 through 2011 from reports buried in the Department of Interior’s website[iii].  IER found that oil production on federal lands in FY2011 did, in fact, decline from the fiscal 2010 level and natural gas production on federal lands declined in FY2010 and then again in FY2011.  While the Administration is correct that oil and gas production in the United States is rising, the data show that where the federal government was in charge oil and gas production fell last year on taxpayer-owned lands.

What Does the ONRR Data Show? 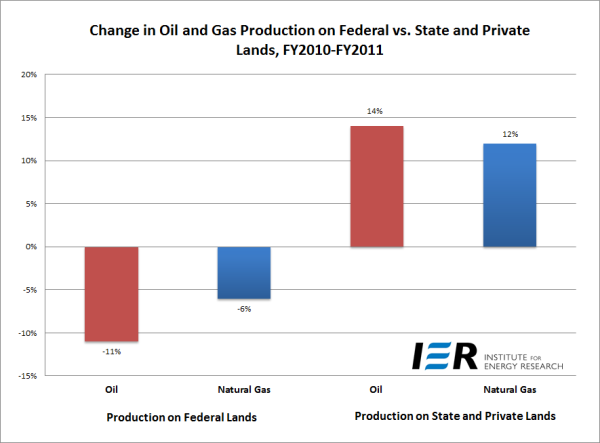 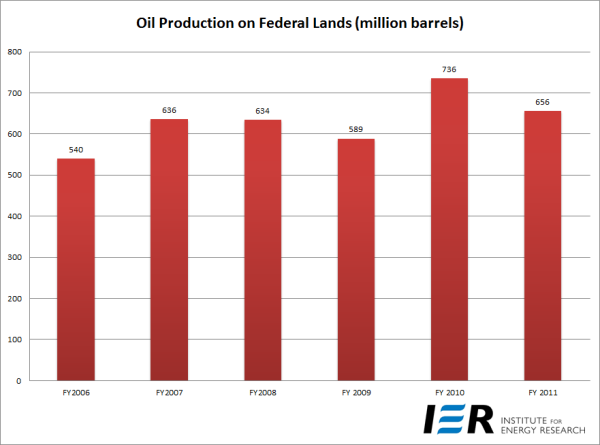 Sources: Department of the Interior, Office of Natural Resources Revenue, http://www.onrr.gov/ONRRWebStats/ExportReport.aspx?report=AllNonRevenueVolumesByCategoryAndCommodity&yeartype=FY&year=2011&datetype=AY and http://www.onrr.gov/ONRRWebStats/Disbursements_Royalties.aspx?report=AllReportedRoyaltyRevenues&yeartype=FY&year=2011&datetype=AY 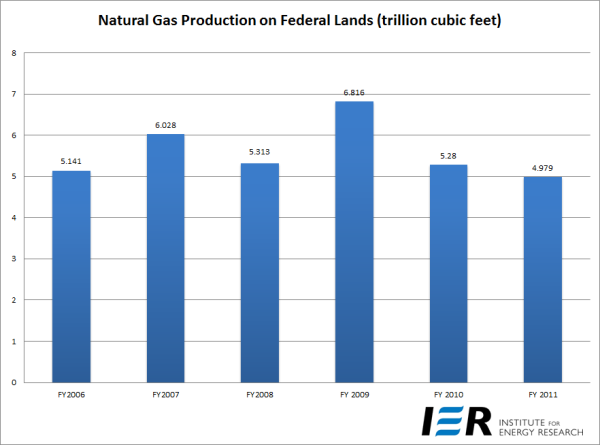 Sources: Department of the Interior, Office of Natural Resources Revenue, http://www.onrr.gov/ONRRWebStats/ExportReport.aspx?report=AllNonRevenueVolumesByCategoryAndCommodity&yeartype=FY&year=2011&datetype=AY and http://www.onrr.gov/ONRRWebStats/Disbursements_Royalties.aspx?report=AllReportedRoyaltyRevenues&yeartype=FY&year=2011&datetype=AY

The above trend indicates the Obama Administration policies that IER reported are causing lower oil and natural gas production on taxpayer-owned lands.[iv] These policies include limiting the offshore areas where oil can be produced, leasing much less land than previous administrations, cancelling oil leases, withdrawing oil leases and slow-walking the issuance of permits that allow domestic energy production. (For more of the Obama administration’s anti-energy actions, click here.)

In obtaining the data for this analysis from the DOI’s Office of Natural Resources Revenue (ONRR) website, IER noted the following:

Rep. Markey was right to ask the U.S. Energy Information Administration to correct its information in the Annual Energy Review, which are not easily obtainable from the Department of Interior either by the general public or by other federal agencies or the Congress.  And while the data disparity noted in Rep. Markey’s letter may lead some to believe that EIA’s under-reporting of production on federal lands gives cover for failed Obama administration policies, the facts remain unchanged.  Production on federal lands is down, while production on state and private lands is up.