President Obama, speaking at a Daimler Truck manufacturing plant in North Carolina, claimed that oil is “the fuel of the past”.[i] Besides wanting an ‘all the above’ energy policy that omits coal, our most abundant fuel, the president wants to convert all of our vehicles to natural gas and electric hybrid. Whether that makes economic sense or not seems immaterial to the president. His goal is to make both coal and oil “fuels of the past.”

Is the president right? Is oil the fuel of the past?   Do others in the know agree with the president? Hardly! Forecasters at the Energy Information Administration (EIA) and the International Energy Agency (IEA) are both expecting a fossil energy world with oil in the lead for decades.  According to the EIA in its Annual Energy Outlook 2012 released in January, petroleum consumption is expected to represent 32 percent of demand in 2035, followed by natural gas at 25 percent and coal at 20 percent.[ii] In IEA’s World Energy Outlook, oil’s share in 2035 is 30 percent, followed by natural gas at 25 percent, and coal at 23 percent. Even in IEA’s New Policy Case, fossil fuels represent 74 percent of the market led by oil.[iii] 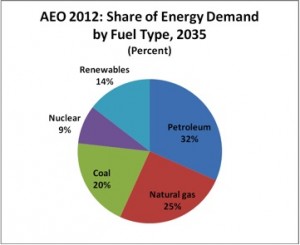 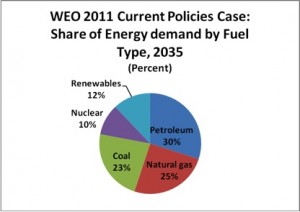 So, just when does President Obama expect oil to be “the fuel of the past”?

First and foremost, the United States has a vast amount of oil resources.  While proven reserves are around 20 billion barrels, technically recoverable oil resources total 1,442 billion barrels, enough to last over 200 years at current usage rates.[iv]  Technically recoverable resources become reserves either when technology enables producers to access the crude at current prices or when prices reach a point to make producing the crude economic. However, to produce it, obstacles need to be removed— and those obstacles include the U.S. government delaying leases, removing resources from lease sales, failing to issue permits or adding regulations which make oil production uneconomic, which has been the case with the Obama Administration.[v]

Second, the Obama-chosen fuels and technologies are not currently economic, and EIA and IEA do not forecast great market penetration through 2035.   Currently, natural gas vehicles are around $10,000 to $20,000 more than comparable gasoline or diesel-fueled vehicles. The compact natural gas (CNG) Honda Civic starts at $26,155—$10,000 more than the base model gasoline Civic. The CNG Dodge Ram 2500 starts at $47,500—$20,000 more than the base Ram.  According to the Natural Gas Vehicles for America, it can cost up to $18,000 to convert a gasoline vehicle to natural gas. While natural gas prices are $1.25 a gallon lower than gasoline prices (January 2012 data), it would take 15 years or more to pay back the higher capital cost of the natural gas vehicle, assuming no government subsidies. That’s more than the average vehicle life. The $7,500 tax credit and even higher gasoline prices compared to natural gas prices helps to bring the pay-back period down, but it is still longer than most people keep their vehicle and the government is running out of money.

Additional problems are that consumers have little choice of vehicle type since there are few natural gas vehicles to choose from and the number of natural gas refilling stations are a mere fraction of gasoline refueling stations.[vi] But there is good new since GM has announced it will be selling two CNG pick-up trucks and GE and Chesapeake Energy have announced a multi-year partnership to expand natural gas fueling infrastructure.[vii]

Natural gas vehicles are President Obama’s second try to foster vehicles other than gasoline fueled vehicles in the transportation sector. His prior attempt was with electric vehicles. But, the Chevy Volt, for example, has been plagued by batteries catching on fire during testing, high purchase costs making it uneconomic for most Americans even with huge subsidies, and limited vehicle range. Recently, General Motors put a halt to its manufacture, laying off 1,300 workers, citing the need to maintain the proper inventory. GM currently has at least a 5-month inventory. In the first two months of this year, GM sold 1,626 Volts, but at that sales rate, the goal of 45,000 sold this year is clearly not achievable.[viii]  GM expects to resume production on April 23.[ix]

President Obama proposes to set aside $1 billion for a national “challenge” to encourage the use by communities of advanced vehicles. He also wants to increase the tax incentive for electric cars and alternative-fueled trucks from $7,500 to $10,000 and fund research into battery and vehicle technology as part of his 2013 budget request. [x]

President Obama needs to face reality that oil resources here in the United States are vast and that the America public expects to use their gasoline vehicles. The public cannot afford the cost of alternative-fueled vehicles and would find the lack of refueling stations a major obstacle. If natural gas prices remain low and manufacturers can reduce the price of natural gas vehicles to make them competitive with gasoline-fueled vehicles, the natural gas fueling infrastructure and vehicles will expand without the need for government subsidies.  The issue the President should address is how to make gasoline prices more affordable. He doesn’t seem to want to face the reality that increased domestic oil production would make the United States less reliant on foreign sources of oil and possibly help keep prices in toe. If he did, he would not place obstacles in front of the men and women in America trying to produce more oil.

[v] Institute for Energy Research, Administration actions designed to increase the cost and reduce the reliability of energy, April 14, 2011, https://www.instituteforenergyresearch.org/2011/04/14/administration-actions-designed-to-increase-the-cost-and-reliability-of-energy/

North Dakota and the Economic Miracle