While the State Department’s latest report on the environmental impact of the Keystone XL pipeline released late last week is favorable to its construction, President Obama is still not so sure[i] and there are several steps to be undertaken before a decision will be made. First, is a comment period lasting 30 days on the report’s findings from the public and a 90-day period for comments from other government agencies. That puts the next milestone into May, at the earliest, when Secretary of State John Kerry is expected to make a recommendation to the President as to whether the pipeline is in the national interest. So, the summer is the earliest when an answer might be expected from the President. Given his past history on the subject, however, delays until beyond the mid-term elections will likely be the case bringing the ‘studying’ of the national merit of the Keystone pipeline to over 6 years.

The 11-volume Final Supplemental Environmental Impact Statement[ii] concludes that the Keystone XL pipeline would have no marginal effect on climate or oil and gas development in the Alberta oil sands because the resources would be produced anyway irrespective of the President’s decision. The only difference is how the oil sands would be transported. 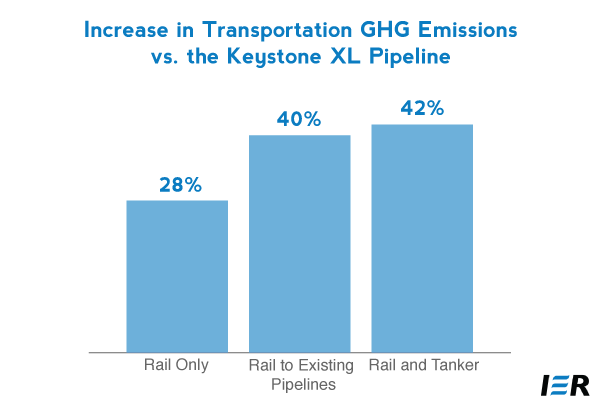 Further, according to the study, replacing the Keystone XL pipeline with rail from Canada could result in an average of six additional rail-related deaths per year. Using data from the Federal Railroad Administration  and the Pipeline and Hazardous Material Safety Administration, shipping 830,000 barrels per day of oil “would result in an estimated 49 additional injuries and six additional fatalities for the No Action rail scenarios compared to one additional injury and no fatalities” per year if Keystone XL is built instead. The “No Action” scenarios analyze the likely situation if the Northern portion of Keystone is not built.[iv]

Also, according to the report, shipping oil by rail, instead of by pipeline, is expected to result in a higher number of oil spills and a larger amount of leakage over time. If Keystone XL is built as planned, it is expected to spill an average of 518 barrels per year, with a leak occurring once every two years. Under the most optimistic scenario involving rail, over 1,200 barrels are expected to be spilled each year from nearly 300 spills.

The State Department expects the Keystone project to create 42,100 direct, indirect, and induced jobs, many of which are union jobs. About 3,900 of those jobs are expected to be temporary construction jobs. Once built over a 2-year period, the pipeline would support 50 jobs directly. Keystone is expected to contribute about $3.4 billion to the economy (about 0.02 percent of GDP).[v]

The State Department report did evaluate some scenarios where Canada’s oil sands would not be produced in their entirety based on a future low price for world oil.  If the price of world oil were to fall to between $65 and $75 per barrel, the higher cost of rail shipping compared to pipeline shipping could make some oil sands unprofitable. Or, if the price were to drop to below $65, then a larger amount of oil sands could be unprofitable to produce with or without the pipeline. However, these scenarios are not very likely particularly since the reason for any speculation in low oil prices is due to the boom in North American crude, of which oil sands is a part.[vi]

It is not just rail that is benefiting from a lack of sufficient pipeline capacity to move oil. Oil moving on barges on the Mississippi River from the Midwest to the Gulf of Mexico has increased by a factor of 13 since 2010. According to federal data, almost five million barrels of oil a month is being shipped by barge from North Dakota’s Bakken Shale and from Canada’s oil sands. Barges also are moving oil around the Gulf and on the East and West coasts, providing links between pipelines and railroad terminals and refineries.[vii]

While barges carry less oil than railcars, are slower, and are more limited to routes, they are less expensive and can fill gaps easily in the logistics chain. An oil barge generally carries 30,000 barrels of oil — less than half the volume of a 100-car oil train.

Oceangoing barges also are moving oil. Waterborne shipments of Eagle Ford shale oil from the Port of Corpus Christi in Texas not only move along the Intracoastal Waterway to refineries on the Gulf Coast, but they also supply oil to New Jersey and Canada’s eastern coast. According to Clipper Data LLC, barge and tanker traffic from Gulf Coast ports to East Coast refineries in the United States and Canada increased by almost a factor of 10 last year. In December, the amount of oil shipped to the Atlantic Coast doubled from August, reaching 1.4 million barrels.

Increased traffic is adding to the profits of barge operators. For example, Houston-based Kirby Corporation, which is the biggest operator by fleet size, reported a record profit of $64.3 million for the fourth quarter based on revenue of $568.4 million. This year, Kirby is adding 37 inland barges to its fleet and one that can travel on the open sea at a cost of $90 million. 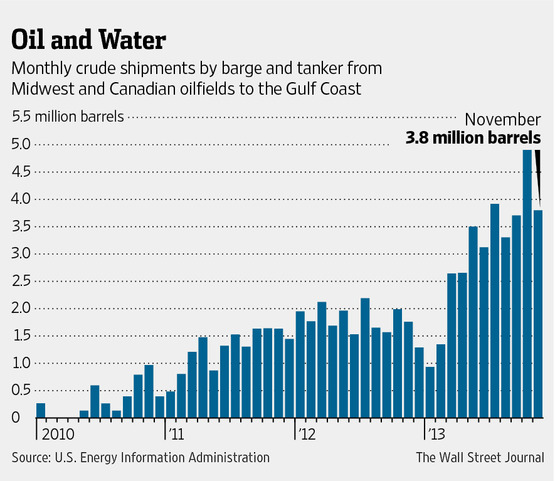 The State Department is finding the Keystone pipeline as a favorable asset in its latest environmental impact statement, which should pave the way for the President to find Keystone in the national interest by this summer. But, President Obama says “not so fast” as comments from the public and other federal agencies are the next steps in the process that has now taken 5 and a half years. But, as we all know, oil sands will be moved regardless of the decision, whether to the United States or Asia, whether by pipeline, rail, barge or tanker. Americans should want and expect the decision to be the safest and cheapest means possible.

[i] National Journal, White House to Keystone Advocates: Not So Fast, January 31, 2014, http://www.nationaljournal.com/energy/white-house-to-keystone-advocates-not-so-fast-20140131

Montana: An Energy and Economic Analysis