One of the most common arguments against lifting the bans on offshore drilling has been the (alleged) claim that “it will take years for motorists to see any relief at the pump.” Economists have known that this view is not supported by economic theory. If government policies change and lead oil producers to expect greater competition in the future, they will expand their production in the present, leading to immediate price relief. (IER economist Robert Murphy made this point on a TV interview on June 26, 2008, while Martin Feldstein made the point in a Wall Street Journal op ed on July 1.) The surprise lifting of the executive version of the offshore ban, coupled with the (also unexpected) capitulation of Congressional Democrats on the legislature’s independent ban, gave a perfect test of the economic theory. As the chart below indicates, oil prices really did respond immediately and significantly to the greater likelihood of future US production.

Specifically, President Bush lifted the executive moratorium on July 14. The response in oil prices was dramatic and immediate. Then on the evening of September 23, Speaker Pelosi announced that House Democrats would defer their battle with pro-drilling Republicans until the after the elections. Thus, when oil markets opened on September 24, traders knew that the United States ban on offshore drilling would expire with the fiscal year on September 30. Although the price of oil bounced around due to the financial crisis and the whipsawing dollar, even so there was an immediate and significant decline in oil prices. 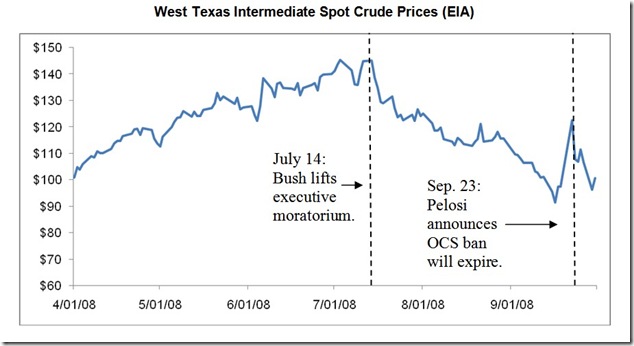 The best news for American consumers is that the above price drops were (apparently) caused merely by an increased likelihood of future domestic energy production. President Bush’s action by itself did nothing, for the Congressional ban was still in effect at that time. And though September 30 marked the expiration of the ban, even so there are many remaining hurdles to actual production, including the very real possibility of a reinstatement of the ban after the elections. If traders received a confident signal from the government that the ban really was dead, and that increased American production would really occur, then oil prices would fall even more significantly.

Both economic theory and now empirical evidence demonstrate that government policies promising future oil production lead to immediate price relief. This is all the more reason for the government to reassure energy producers that their efforts to develop American resources are welcomed and encouraged.