The proponents of LCFS claim the plan’s goal is to reduce emissions from motor vehicles and home-heating fuels. But as this analysis shows, an LCFS is another tax on transportation. An LCFS increases the price of gasoline and home heating oil, leads to more oil imports from the Middle East, and penalizes oil imports from our largest trading partner and biggest oil supplier—Canada.

What is a Low Carbon Fuel Standard?

For all practical purposes, LCFS is a new tax on gasoline and heating oil. It is new regulation which requires the reduction of carbon dioxide emissions associated with the production (including land use changes), manufacture, transportation and combustion of transportation fuels.

According to the letter of intent signed by 11 states (Connecticut, Delaware, Maine, Maryland, Massachusetts, New York, New Hampshire, New Jersey, Pennsylvania, Rhode Island and Vermont) participating in the Northeastern LCFS scheme, an LCFS is a “market-based, technologically neutral policy to address the carbon content of fuels by requiring reductions in the average lifecycle GHG [greenhouse gas] emissions per unit of useful energy.”

Despite the assertions of LCFS proponents, an LCFS is not market-based— it’s a classic top-down regulation. It is not entirely technology neutral—in practice it obviously penalizes certain fuel-producing technologies. More importantly, it does not address the difficultly and possibly impracticality of accurately calculating “lifecycle GHG emissions.”

1. LCFS are based on the Field of Dreams principle—if you mandate it, it will come. LCFS are expensive, harmful to consumers, and diverts resources away from more productive investments. Breakthroughs in technology occur in the marketplace, not in government committee rooms. Policymakers are free to set standards and goals—such as 10 percent less carbon intensity or a manned missions to Mars—but that does not mean the technology to economically achieve those goal will immediately follow. For example, a couple of years ago, many people thought we could economically have low carbon fuels by merely increasing the biofuel content of gasoline. The majority of the science, however, does not support this belief (see bullet point 4 below).

2. Biofuel production increases the price of food and makes life more difficult for the world’s poor. Biofuels are “a crime against humanity” in the words of Jean Ziegler, the UN special rapporteur on the right to food. Biofuel takes land that has been used for food crops and replaces the food crops with fuel crops. This unnecessarily takes food out of the mouths of the world’s poor. Increased ethanol production has helped increase food prices and has led to great hardships around the world including food riots. Next-generation biofuels are supposed to somewhat relieve this problem by using non-food crops, such as switchgrass or miscanthus, to produce biofuel, but these crops will still compete for arable land and agricultural resources. 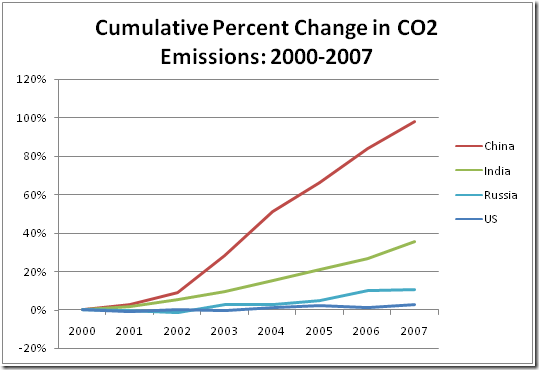 Conclusion: An LCFS is Another Tax on Transportation

An LCFS, either nationwide or at the state level, would damage economy without having an impact global temperatures. The technology to implement an LCFS does not currently exist. If an LCFS resulted in increased biofuel use, it would be very harmful to the world’s poor. Finally, for those worried about energy security, an LCFS would favor Middle Eastern oil over Canadian and domestic fuels.

[2] The study will soon be published in the Proceedings of the National Academy of Sciences.

[3] Calculated using the emissions data from the Global Carbon Project. According to EPA, the GHG emissions from the transportation sector total 28 percent of total U.S. emissions in 2006. Environmental Protection Agency, Regulating Greenhouse Gas Emissions Under the Clean Air Act; Proposed Rule, 73 Fed. Reg. 44354, 44403 (July, 30, 2008). Twenty-eight percent of the U.S.’s 2006 carbon dioxide emissions are 436,141 GgC. A nationwide LCFS for the entire transportation sector, if it followed California’s example, would reduce transportation emissions by 10.5 percent, or 45,795 GgC per year. From 2006 to 2007, the world’s carbon dioxide emissions (excluding the United States) increased by 213,436 GgC. At this rate of change, the 10.5percent LCFS-forced reduction in U.S. transportation emissions would be replaced in 78.3 days.

[4] According to the Global Carbon project in 2007, China emitted 21 percent of the world’s carbon equivalent and the U.S. emitted 19 percent.

IER to Stimulus: We’re Watching You