A new study by Deloitte indicates that over 35 percent of independent oil companies worldwide are likely to declare bankruptcy this year and another 30 percent may follow next year.[i] Low oil prices are making oil companies cut dividends and expenditures, lay off workers and otherwise reduce expenses to pay off debt. However, even with these steps, many companies worldwide will be declaring bankruptcy this year and next.

Deloitte analysts reviewed over 500 publicly traded oil and natural gas exploration and production companies and found 175 high risk companies worldwide that have mountains of debt (over $150 billion), and 160 others that are less leveraged but cash-flow constrained that will face bankruptcy decisions next year. This is despite oil companies having raised about $130 billion in an attempt to withstand the lower priced oil market.[ii] About two-thirds of those revenues came from means other than budget cuts, such as asset sales or issuance of new equity. In 2015, the industry was aided by access to capital markets, bankers’ support and derivatives protection, but those avenues are now waning. The cuts in 2015 and those expected in 2016 will be the first since the mid-1980s when budgets last fell for two consecutive years.

Between July 2014 and end of December 2015, 35 exploration and production companies in the United States filed for bankruptcy protection.[iii] During this time, oil prices fell from over $96 to less than $40 per barrel. These 35 companies had a cumulative debt of under $18 billion. Most of the filings (21 out of 35) occurred in the second half of 2015. The filings were made by firms of various sizes and business experience. Forty-three percent were in business over 10 years, and 12 percent had revenues over $500 million. Most (65 percent) were located in Texas. (See chart below.) Over 80 percent of these companies are still operating. These 35 companies are fewer than the 62 exploration and production companies that filed for bankruptcy during the Great Recession (from September 1, 2008 to December 31, 2009). 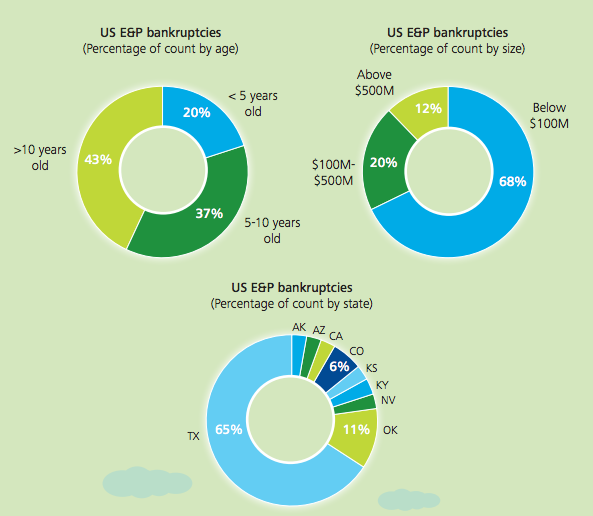 U.S. exploration and production companies have reduced their production costs significantly, particularly in 2015. Now, 95 percent of oil producers can produce crude for less than $15 per barrel compared to only 65 percent in the second quarter of 2014. The reduction in operating costs has come from cost savings and technological improvements that have resulted in higher well productivity. (See chart below.) 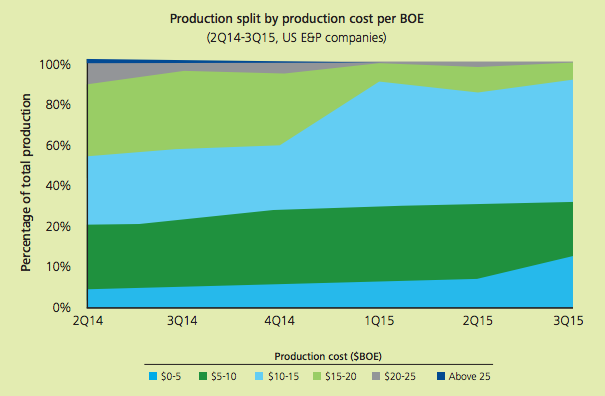 U.S. exploration and production companies are finding more production cost reductions in natural gas than in oil. Between the second quarter of 2014 and the third quarter of 2015, U.S. gas-heavy players reduced their operating costs by 29 percent, while oil-heavy players reduced their operating costs by 25 percent. Economies of scale and scope seem to be benefiting natural gas players more than oil. Given the technological similarities between shale gas and shale oil, however, oil players should be able to further reduce costs. 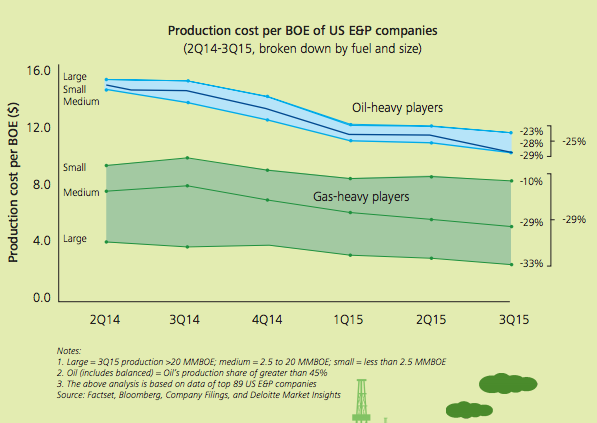 Low oil prices are affecting the solvency of oil companies worldwide—particularly the small independent producers. Oil producers that are highly leveraged face the greatest risk of bankruptcy. Out of 500 companies reviewed, 175 were determined to be of high risk and in possible need of bankruptcy protection this year with another 160 companies possibly facing bankruptcy next year. According to Andrew Slaughter, an executive director at Deloitte, “Staying solvent will require the same level of perseverance, innovative thinking and creativity as the technology breakthroughs that led to the boom in supply we have seen over recent years.”[v]

Despite the oil companies filing for bankruptcy and laying off workers, President Obama wants a new $10.25 per barrel tax on the oil industry for pie-in-the-sky transportation proposals.[vi] Conventional wisdom would have government seeking areas where it could help to ease the pain. However, the Obama administration seems more interested in making the damage worse. In fact, despite the press announcements, the proposed “fee” is nothing but a tax on consumers, which is also an attack on the economic well-being of the American middle class.

[i] Deloitte Center for Energy Solutions, The crude downturn for exploration and production companies, February 2016, https://www2.deloitte.com/content/dam/Deloitte/us/Documents/energy-resources/us-er-crude-downturn.pdf