The Navy will be paying about $15 per gallon for a biofuel-gasoline blend that will be used in a demonstration project next summer.[i] The Navy believes that “Our use of fossil fuels is a very real threat to our national security.” This statement is based on the myth that the United States and North America as a whole has very limited oil resources.

Last week, the Navy signed a contract with two biofuel companies to purchase 450,000 gallons of advanced biofuels at $12 million to assist in President Obama’s goal to establish a domestic biofuels industry and to advance it in ways that do not require Congressional approval. Of course, given the Navy’s mission, they claim to be pursuing biofuels to ensure adequate fuel in the future without relying on crude from the Middle East or other overseas sources that may be a threat to our national security. While this purchase is only a drop in the bucket compared to the Navy’s annual usage of more than 670 million gallons, their goal is to fuel a normal Navy mission with a 50-percent blend of biofuels and gasoline by 2016.

The Navy pays $26 a gallon for the biofuel and after combining it with the oil product in a 50/50 blend obtains a fuel that costs $15 per gallon. That is almost 4 times the cost of JP-5 jet fuel, which runs $3.97 per gallon. An MIT study of alternative jet fuels, conducted in association with the Navy, found that even under optimal conditions, the price of bio jet fuel would still be twice as high as the cost of the traditional jet fuel.[iii]

Unconventional oil and natural gas resources are being produced from Australia to Canada, despite environmentalists attacking their production. In the United States alone, there are over 20 shale gas basins including the large basins of Haynesville, located in Louisiana, East Texas and southwestern Arkansas, and Marcellus, which encompasses much of the Appalachian Basin.[v] According to PFC Energy, by 2020, shale resources will make up about a third of total U.S. oil and gas production. PFC Energy predicts that the United States will be the top global oil and gas producer by then, surpassing Russia and Saudi Arabia.[vi] 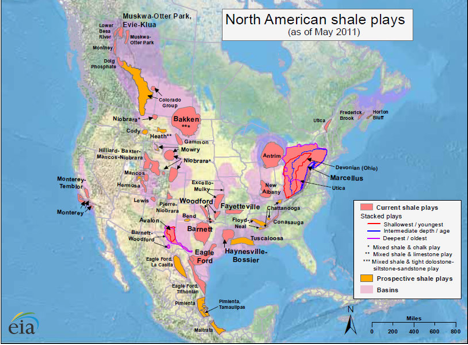 Environmentalists claim they oppose shale-gas extraction due to fears that hydraulic fracturing may contaminate water supplies, the oil-sands industry because it is energy-intensive and releases more greenhouse gases than conventional oil, and deep-water drilling because of the risk of oil spills. While environmentalists have made these assertions, there has been no proof of water contamination from hydraulic fracturing, greenhouse gases released from oil sands have been shown to be only 5 to 15 percent more than conventional oil on a well-to-wheels basis, and technology to deal with oil spills in deep water has been advanced to deal with any future spills, should they occur. What would be worse for the United States is a compromised military mission due to inflated fuel prices resulting from the government’s obsession with forcing uneconomic and unproven fuels on the populace.

The administration is squandering limited national defense dollars on a political agenda premised upon their insistence that the United States and North America have insufficient supplies of energy to supply our needs.  The government’s own analysis of our energy wealth proves this premise wrong, as illustrated by IER’s study. As decisions are made about where to trim unnecessary fat across the federal government, the Defense Department’s unnecessary and expensive expenditure for biofuels should be right at the top of the list.  Hiding another way to pursue the Administration’s green political agenda behind the façade of national security is a disturbing circumstance.

The great irony of the Navy using incredibly expensive biofuel is that the Navy, of all organizations, should understand just how vast America’s oil and natural gas resources are. After all, multiple laws and Executive Orders set aside energy resources for the use of the Navy.[vii] The Naval Petroleum Reserve-Alaska (NPR-A) is a 23 million acre area (about the size of the State of Indiana) in northern Alaska that contains an estimated 10.6 billion barrels of oil. In 1923, President Harding set aside this area to be used as an emergency oil source for the U.S. Navy. In 1976, the administration of the reserve was transferred to the Department of the Interior. While the Department of Interior has held lease sales for oil production in the NPR-A, no oil is being produced there because of lawsuits filed by environmental organizations and the need for a permit from the U.S. Army Corps of Engineers to construct a pipeline.

BREAKING NEWS: The Report the White House Doesn't Want You To Read