Two days ago President Obama unveiled his “Blueprint for a Secure Energy Future” [.pdf] in a speech at Georgetown University. It’s unfortunate that the young impressionable minds were 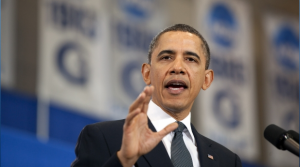 subjected to the talk, as it was chock-full of economic nonsense. In the future we recommend Georgetown look to Harvard for a more suitable public speaker.

The single worst component of Obama’s address was his prescription for getting more domestic oil production:

[W]e’re actually pushing the oil industry to take advantage of the opportunities that they’ve already got.  Right now the industry holds tens of millions of acres of leases where they’re not producing a single drop.  They’re just sitting on supplies of American energy that are ready to be tapped.  That’s why part of our plan is to provide new and better incentives that promote rapid, responsible development of these resources.

Well that’s interesting, the President is going to have the federal government provide “new and better incentives” that promote the development of domestic petroleum resources.

He didn’t elaborate in the speech at Georgetown, so let’s try to guess what he has in mind. When the Obama Administration wants to provide incentives to promote the development of “green” technologies, it does things like give those companies direct subsidies or tax breaks, and it threatens to put new taxes on competing technologies.

So by that logic, if Obama tells the Georgetown students he is going to “provide new and better incentives” for the “rapid” development of domestic oil, he must have in mind reducing the fees that the government charges to energy companies, or perhaps he wants to reduce taxes on domestic oil producers?

Actually no, the Obama Administration wants to do the opposite of these things: it wants to raise the fees it charges for leasing federal land to oil development, and it wants to raise the taxes paid by oil companies by $3.5 billion next year alone. Apparently, the way to promote “green” energy is to subsidize it, but the way to promote fossil energy is to impose higher fees and taxes. Funny how that works.

The Administration’s “logic” regarding oil leases is liable to drive one insane. The claim is that oil companies pay billions of dollars to the federal government to obtain the right to drill, and then purposely don’t drill in order to drive up the price of oil. But wouldn’t it be cheaper to not bid on the lands in the first place? And why is the oil industry in favor of expanded access to drill offshore and in ANWR, if their nefarious plot is to keep oil off the market and push up prices?

Obviously the whole thing makes no sense. The reason the oil industry doesn’t extract oil from certain leased land is that oil isn’t distributed evenly across the globe. Companies can’t be sure where it is profitable to set up a major well until they explore the land. The real beneficiaries of stunting U.S. oil production aren’t domestic oil companies, but state-owned oil companies around the world. It’s a good thing Energy Secretary Chu wasn’t in charge of Thomas Edison’s search for a commercially viable light bulb. After the 3,000th failure, Chu would no doubt have accused Edison of purposely driving up the price of incandescents. (Of course that would be construed as a good thing, in light of climate change rhetoric…)

The Rise of the Technocrats

Speaking of Secretary Chu, apparently he’s one smart fellow. Obama had these kind remarks for his cabinet pick:

I’ve asked Secretary Chu, my Energy Secretary, to work with other agencies, the natural gas industry, states, and environmental experts to improve the safety of this process [of extracting natural gas from shale].  And Chu is the right guy to do this.  He’s got a Nobel Prize in physics.  He actually deserved his Nobel Prize.  (Laughter and applause.)  And this is the kind of thing that he likes to do for fun on the weekend.  (Laughter.)  He goes into his garage and he tinkers around and figures out how to extract natural gas.  (Laughter.)

I’m going to embarrass him further.  (Laughter.)  Last year, when we were trying to fill — figure out how to close the cap, I sent Chu down to sit in the BP offices, and he essentially designed the cap that ultimately worked, and he drew up the specs for it and had BP build it, construct it.  So this is somebody who knows what he’s doing.  (Applause.)  So for those of you who are studying physics, it may actually pay off someday.  (Laughter.)

If Secretary Chu really did invent the cap, he did a good job maintaining his secret identity. Like Obama’s infamous “spread the wealth around” remark to Joe the Plumber, his comments in the above quote reveal his central planning worldview. Got a problem? Just get the right expert and have him solve it. Whether it’s unemployment, climate change, or democracy in the Middle East, we just need to get the smartest guys (and gals) in the room and impose the solution on everybody—with the bill sent to the American taxpayer, of course.

Obama treated the Georgetown students to some more bad economics on the topic of biofuels:

Now, another substitute for oil that holds tremendous promise is renewable biofuels -– not just ethanol, but biofuels made from things like switchgrass and wood chips and biomass.

I’m directing the Navy and the Department of Energy and Agriculture to work with the private sector to create advanced biofuels that can power not just fighter jets, but also trucks and commercial airliners.

So there’s no reason we shouldn’t be using these renewable fuels throughout America.  And that’s why we’re investing in things like fueling stations and research into the next generation of biofuels.  One of the biggest problems we have with alternative energy is not just producing the energy, but also distributing it.  We’ve got gas stations all around the country, so whenever you need gas you know you can fill up — it doesn’t matter where you are.  Well, we’ve got to have that same kind of distribution network when it comes to our renewable energy sources so that when you are converting to a different kind of car that runs on a different kind of energy, you’re going to be able to have that same convenience.  Otherwise, the market won’t work; it won’t grow.

Over the next two years, we’ll help entrepreneurs break ground for four next-generation biorefineries -– each with a capacity of more than 20 million gallons per year.  And going forward, we should look for ways to reform biofuels incentives to make sure that they’re meeting today’s challenges and that they’re also saving taxpayers money.

And thus the boondoggles grow. Federal law already mandates that the U.S. produce 100 million gallons of advanced biofuel in 2010, yet because the technology wasn’t ready, not a single drop was actually blended into commercial gasoline. Now, with the president’s call for subsidizing the distribution network, the Administration gets to hand out money not just to farmers—so they can put food into gas tanks—but to hand it out to (union-connected) infrastructure projects.

It’s worth pointing out that the MPG/BTU adjusted price of ethanol has broken $4 per gallon. Although “E85” looks cheaper at the pump, this is an illusion since cars get worse mileage when ethanol is blended with conventional gasoline. Even as Obama tells the students of his commitment to biofuels, there are discussions afoot to rollback the ethanol tax credit for refiners.

Just to make sure he distributed the blows to various sectors of America’s economy, Obama also promised further crippling regulations on the struggling auto manufacturers:

[L]ast year, we established a groundbreaking national fuel efficiency standard for cars and trucks.  We did this last year without legislation.  We just got all the parties together and we got them to agree — automakers, autoworkers, environmental groups, industry.

So that means our cars will be getting better gas mileage, saving 1.8 billion barrels of oil over the life of the program — 1.8 billion.  Our consumers will save money from fewer trips to the pump -– $3,000 on average over time you will save because of these higher fuel efficiency standards.  And our automakers will build more innovative products.  Right now, there are even cars rolling off the assembly lines in Detroit with combustion engines — I’m not talking about hybrids — combustion engines that get more than 50 miles per gallon.  So we know how to do it.  We know how to make our cars more efficient.

But going forward, we’re going to continue to work with the automakers, with the autoworkers, with states, to ensure the high-quality, fuel-efficient cars and trucks of tomorrow are built right here in the United States of America.  That’s going to be a top priority for us.  (Applause.)

This summer, we’re going to propose the first-ever fuel efficiency standards for heavy-duty trucks.  And this fall, we’ll announce the next round of fuel standards for cars that builds on what we’ve already done.

These remarks illustrate yet again the central-planning, technocrat mentality of this Administration. Just because something is physically possible doesn’t mean it’s economically efficient. Americans know how to grow oranges in hot-houses in Alaska; that doesn’t mean it makes economic sense to mandate the operation.

Besides driving up costs and making vehicles more dangerous for motorists, there’s the awkward fact that drives for energy efficiency may not reduce total energy consumption. “Jevon’s Paradox,” named after the economist William Stanley Jevons, occurs when people consume more total energy when the relevant price becomes cheaper. For example, if the American vehicle fleet becomes more fuel-efficient, then Americans will tend to drive more miles per vehicle. Thus it’s not even clear that on the narrow criterion of reducing total oil imports, Obama’s proposals make any sense.

In light of the string of economic fallacies contained in President Obama’s remarks on his new blueprint for America’s energy future, we can only hope that most Georgetown students were looking at their smart phones during the address.