Memories are short, and we often mistake prices of the last few years as indicative of the historical norm. Indeed, when it comes to the price of crude oil, most Americans would probably be surprised to learn that it is still well above the long-term historical average, once we adjust for price inflation. Contrary to the popular rhetoric, cheap and plentiful energy has been the norm for the United States economy. There is nothing “unnatural” or “dangerous” about giving Americans access to affordable energy.

Figure 1 below shows the history of U.S. crude prices. 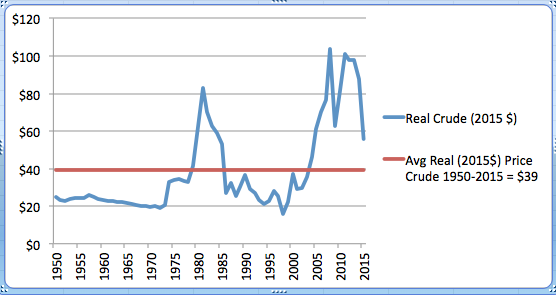 Contrary to popular belief, oil is not “cheap” right now, compared to the historical average. Over the period 1950-2015, the average annual price of a barrel of crude would be $39, when put into 2015 dollars using the Consumer Price Index.

Yes, crude oil seems “cheap” lately, but’s that only because it has been historically very expensive since the mid-2000s. So we can see yet another problem with the argument that the U.S. government should raise the gas tax and/or impose a carbon tax now “while oil is cheap.”

Figure 2 shows the opposite story when it comes to natural gas. Here, the tremendous surge in output and consequent fall in price due (in large part) to innovations in hydraulic fracturing and horizontal drilling have pushed natural gas prices below their historical averages. Adjusted for inflation, natural gas prices are just about as low as they’ve been over the last 25 years.

Misled by the financial press, Americans probably think that oil prices are abnormally low, and that this somehow poses risks for the tepid economic recovery. On the contrary, the surge in U.S. oil output has merely pushed prices back toward their historical average, but they are still relatively high. If the government would pull back from the industry and let the market work, Americans would have access to plentiful and affordable energy that would fuel a vibrant economy.

Lame Duck President Rejects Will of the American People

UK Must Use Diesel Generators to Back-Up Wind Turbines