“If we want to wean ourselves from foreign oil, why would we allow a pipeline to be built for 1,700 miles to manufacture petroleum products to be shipped overseas?” Reid told reporters after the weekly Senate Democratic policy lunch. “That’s the purpose of this.”[i]

What Harry Reid seems to be referring to is that in 2011, for the first time in 62 years, the United States was a net exporter of petroleum products[ii], exporting about 15 percent of the petroleum products the U.S. produced.  Unfortunately, his statements show that he understands little about the U.S. petroleum industry and consumer petroleum demand. 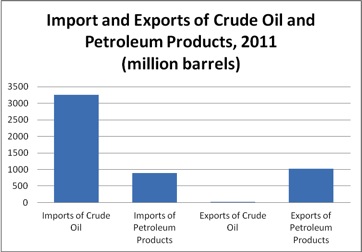 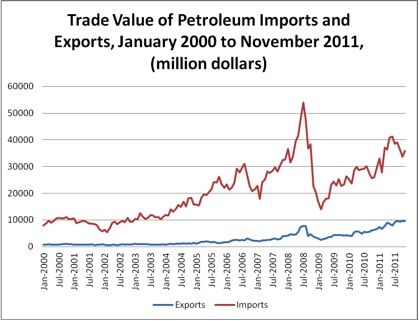 U.S. petroleum demand took a nose dive beginning in 2008 primarily due to the recession. The petroleum industry has not been able to recoup that demand mainly due to a poor economy and high national unemployment. For example, one reason that gasoline demand is down is because Americans are driving less. According to a USA Today analysis of data from the Federal Highway Administration, Americans have been driving fewer miles every month since March, 2011.[iii] “With the number of Americans unemployed or underemployed, you have a reduction in disposable income, fewer commutes, fewer shopping trips and leisure trips,” says Troy Green of AAA.[iv]

While oil production is up in the United States, it is not enough to preclude the need for imported crude oil. In fact, in 2011, the United States imported 4.1 billion barrels of crude oil and petroleum products, four times the amount it exported. But, we now get almost half of our net crude oil and petroleum imports from the Western Hemisphere, and half of that (or more than a quarter of the total) is from Canada. In 2010, just 12 percent of our net imports came from Saudi Arabia, down from almost 19 percent in 1993.[vii]

Why is the United States exporting some of the petroleum products it is producing?  Because without those exports, the U.S. refining industry would not be able to survive the current slump in petroleum product demand and remain solvent to produce refined products in the future. In December 2011, the Energy Information Administration (EIA) calculated that a mere 5 percent of the price of a gallon of diesel went to refineries and an amazing -2 percent of the price of a gallon of gasoline. Yes, that is a minus 2 percent! Of course these are only estimates of the four cost components of gasoline and diesel. But the majority of the price of gasoline (80 percent) and diesel (68 percent) is attributed to the cost of crude oil. 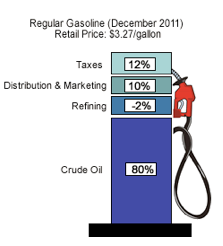 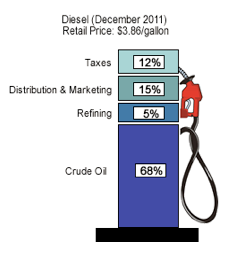 U.S. refineries need to be prepared in case the U.S. economy rebounds, raising the demand for petroleum products and the demand for crude oil imports. Currently, the United States has a market for its petroleum products due to the economic growth of emerging economies. If these economies were to slip, the United States could lose those markets and be forced to remain solvent based solely on U.S. demand and prices.

U.S. refiners are closing plants that have become uneconomic. These closures have dire implications for users of petroleum products in the United States.  In recent years, refineries closed in Westville, New Jersey, and Yorktown, Virginia and this past December a large refinery in southeastern Pennsylvania and one in New Jersey were shuttered.[viii] In Pennsylvania, Sunoco is trying to sell its Marcus Hook and South Philadelphia refineries, whose combined output is 500,000 barrels a day, or it will shutter the plants by July. Since 2009, those plants have lost $772 million. Conoco Phillips is also planning to shutter a refinery that produces 185,000 barrels a day in Trainer, Pennsylvania if it cannot find a buyer.[ix]

These refiners have been hit by weak demand because of slow economic growth, increased use of ethanol, and higher vehicle fuel efficiency. Between 2004 and 2011, demand for refined products in the Northeast and Mid-Atlantic states declined by 12 percent, with the largest decline in distillates, according to a study by Kevin Lindemar, a petroleum refining expert. According to Lindemar, east coast refinery closures together with one in the U.S. Virgin Islands (Hovensa) will reduce their output of refined products by about 1 million barrels a day between 2009 and 2012.[x]

Replacing the lost supply of gasoline is a lesser problem than replacing distillates — diesel and heating oil. Europe, who relies more on diesel than gasoline usually has a surplus of gasoline to sell to the United States, but because diesel is in tight supply in Europe, very little is imported into the United States. Most diesel imports come to the United States from dedicated refineries in Canada. Attracting adequate supplies of diesel and heating oil to East Coast markets in the future may require a hefty price premium or shortages will result. The impact from the shuttered refineries will be felt first through increases in gas prices along the East Coast, particularly north of Washington DC.  Some forecasters are predicting prices in the $4 to $5 a gallon price range.[xi]

These refinery closures will mean higher prices and a loss of American jobs in a tough economy. Refiners must find additional markets if they are to survive.  One way to keep those refineries operating is to export petroleum products.

Outside of North and South America, China, Japan, Singapore, and various European countries are also buyers of U.S. petroleum products. 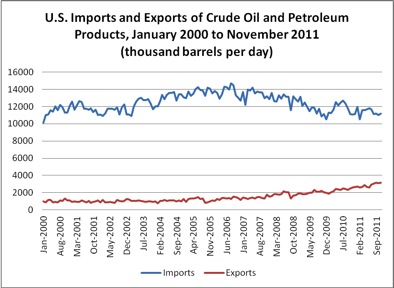 The United States has become a net exporter of petroleum products for the first time in 62 years due to lower U.S. petroleum demand and thriving markets in emerging nations, many of which are in North and   South America. The markets for petroleum products could shift at any time due to economic changes in the United States and/or in emerging economies. Regardless, U.S. refineries need to be in operation and ready to fulfill those demands. Closures of refineries due to lack of U.S. demand will only mean higher prices in the future and fewer jobs for Americans.

Some politicians want the public to believe that the Keystone pipeline is to make refiners rich from exporting petroleum products, but that is a far cry from the truth, when their price share of a gallon of gasoline, according to EIA, is in the negative. Refinery exports are currently keeping the lights on at refineries in the United States so they can survive until a time when the economy recovers and demand here increases.

The Keystone pipeline could keep some U.S. refineries in business. While those refiners might export some of the products they produce, they would be remaining solvent to supply future U.S. demand. What U.S. refineries need is access to a stable supply of oil, which Canada and Keystone can provide.