The Gulf Economic Survival Team, a group of energy and business interests based largely in Louisiana,  had IHS Global Insight and IHS CERA study the impact of faster permitting of oil leases on offshore oil production and the economies of the United States and affected states.[ii] They determined that increased exploration and permitting approval in 2012 would:

Further, ten oil rigs have left the Gulf of Mexico since the moratorium for more lucrative areas offshore in Egypt, Congo, French Guiana, Liberia, Nigeria, and Brazil.[iii] Although federal officials announced they were lifting the restrictions last October on a moratorium put in place in May 2011, a “de-facto moratorium” remains in effect that lowers oil and natural gas production and impacts businesses in the Gulf region.

This study evaluated the pace of permitting offshore leases in the Gulf of Mexico by the Bureau of Ocean Management, Regulation and Enforcement (BOMRE), an organization in the Department of Interior. The period of review was from the end of the moratorium on offshore drilling by the Obama Administration in October 2010 until April 30, 2011, 6 months of data. They found that the number of pending exploration and development plans submitted to BOEMRE that have not received final action has increased by almost 90 percent from historical levels. The median number of days a plan is pending approval has increased from 36 days to 131 days. They also found that exploration and development plan approvals are down by more than 85 percent and approvals of drill permits covered by those plans are down by almost 65 percent. The slower pace of approvals will make other investment opportunities more advantageous for the industries involved. Already ten rigs have left the area for opportunities in other areas of the world. 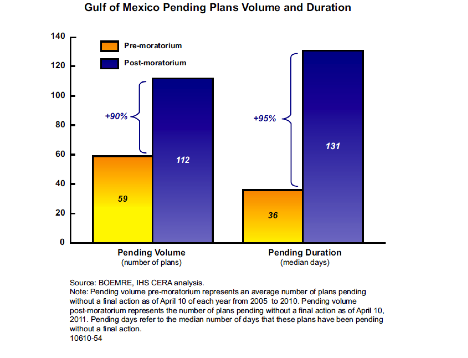 After the spill and the reorganization of the Minerals Management Service into BOMRE, new safety and environmental rules were issued, probably causing a slowdown to both the number of applications and to the approval process.  This study, however, did not determine the causes for the slowdown nor what actions should be taken to fix it. Rather the study evaluated the impact of approving permits faster and reducing the backlog of the permits currently in the pipeline, finding that employment and tax royalty revenues would increase and energy security would improve from the increased production. The results of their analysis are shown in the table below.

Employment would not only increase in the Gulf States, but in states such as Florida, Georgia, California, Illinois, and Pennsylvania. Louisiana’s potential increased revenues of $1.3 billion would cut its budget shortfall by more than 80 percent. The state results are provided below. 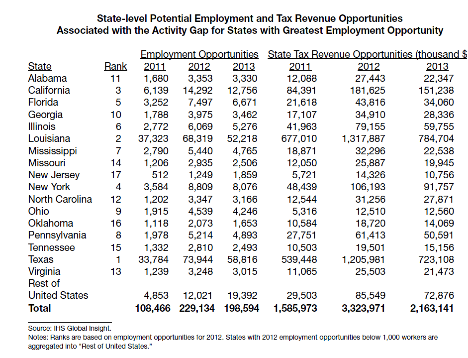 The report’s message is that the output of BOEMRE in regard to regulatory oversight and responsiveness should be aligned with the level of investment that oil companies are willing to make in the Gulf. For instance, in June, Exxon Mobil announced a new discovery in the Keathley Canyon area of the Gulf with recoverable oil estimated at 700 million barrels and Shell announced plans to invest $2.5 billion in its Cardamon field in the Gulf.[iv]  Just the royalty to the federal treasury from Exxon’s find at today’s oil price is more than $13 billion.

It generally takes seven to ten years from exploration and development to initial production. And not all drilling activity results in oil production. Generally, only one in seven wells will result in economically viable reserves. So, in order to keep production at or above current levels, it is crucial for exploration to continue at historic rates.

Studies are showing that we are losing oil production from the Gulf of Mexico from the Obama Administration’s moratorium and its continuing slowness in approving permits or a “permitorium”. The study by IHS Global Insight and IHS CERA is indicating that there are great economic gains to be reaped if the Administration speeds up their slow permit process.  But, the reality is that a slowdown is occurring with the resultant impact of less employment, less government tax revenues, less oil production, and less energy security.