The federal government owns 699,700,000 acres of the U.S. “mineral estate,” –where energy is found — out of a total acreage of 2,271,343,360. That means the United States owns 30.8 percent of the lands that could be explored for oil production in the United States, but produced only 7.5 percent of the total oil produced onshore in the United States in fiscal year 2011, or 0.1596 barrels per acre. That compares to 0.87375 barrels of oil per acre produced on all non-federal mineral estate lands. The latter number is most likely a low estimate of oil production per acre on private and state lands because not all lands hold mineral resources. But using the above numbers, per acre, 5.5 times more oil is produced on private and state lands than on federal lands. 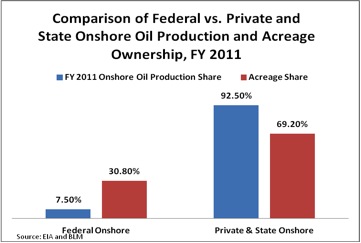 One of the fastest growing sources of oil and natural gas is in shale formations where energy is produced using hydraulic fracturing and horizontal drilling. In hydraulic fracturing water and chemicals are pumped into the well to break up the shale rock so that horizontal drilling can be used to obtain the oil or natural gas from the well. The Bakken shale formation in North Dakota and the Eagle Ford shale formation in Texas are two shale formations producing vast amounts of oil in those states.  The map below depicts shale wells on private and state lands versus federal lands. The large disparity between the amount of shale oil production on state and private lands versus federal lands can be seen from the wells on this map.

Shale Wells on Private and State Lands Versus Federal Lands 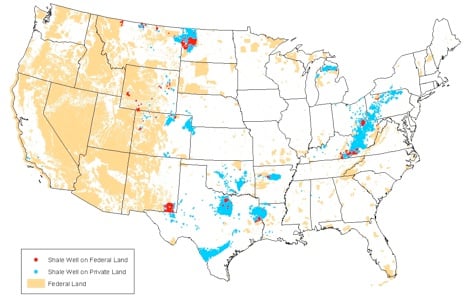 What's Wrong With the SAFE Report?